Considering a 12" arm for a new TT project, and wondered whether I should be:

Not sure if it’s relevant for you but I’ve got an SME312S and a Nottingham Anna 12" and I much prefer the Nottingham. It’s not as solid or high-tech or attractive as the SME but music sounds better with it.

I know someone here in the UK with a spare new Groovemaster MKII which is substantially better than a 3012 (pending what cart you intend to pair with it.) 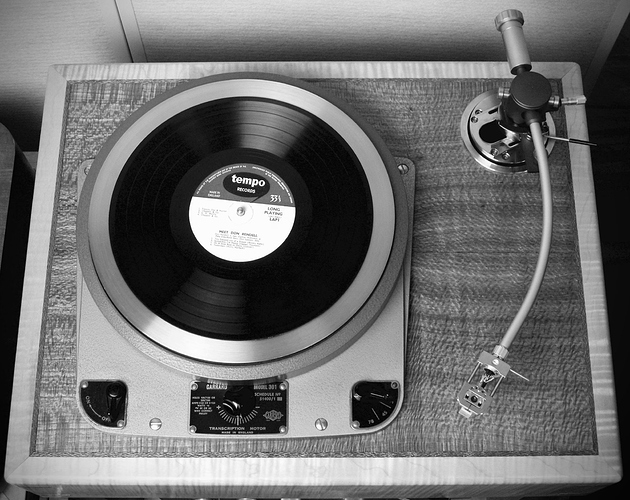 Is that the banana one?

Edit, just seen the picture. Yes it is.

They’re cool, I was going to buy one before I gave up.

Would look great on a nice jap direct drive like mine…

Kuzma Stogi is the best 12 incher.

But getting summat to suit your cartridge is probably best.

Cart will be Hana SL.

Not decided on exact TT but thinking DD.

I don’t think I’ve tried the Hana on it. The arm has usually been partnered with lower compliance MC’s. It’d be an interesting combination to try. The Hana is quite a lightweight item, The arm would have to be used without any of the extra c/weights or with a heavy shell.

Intrigued by what you mean by better?

What kind of MC’s have you found to be a good match for the GM?

Quite a haul of carts

The EU does sound lovely though, I may have to own one at some point

Intrigued by what you mean by better?

Some things to watch for in an original 3012.
50 year old wiring & soldering, worn knife edge bearings and ball races, dangling fish wire bias weight (SME later improved this with the pulley type in 3009 improved), stiff headshell connector pins, 5 prong phono connection (Rca conversion kits are available), sagging rubber coupling (Between arm tube and stub), thin base plate, dry bedplate grommets, often depleted dashpot fluid (lift lower) Metal arm rest clasp that marks the arm tube + Any previous cack handed servicing… I’m being picky here but another business we’re closely associated with is one of the UK’s largest vintage SME parts re-sellers. I get to see the above issues on a daily basis. I do use a series 1 3012. It’s a rather different beast but it’s been fully stripped down and rebuilt to address all of the above issues.

You went directly to original series 1 in your description, is that to demonstrate the need to consider the potential pitfalls with age or because you prefer the original over the later series?

Any views on the potential effects on the sound between 3012 and GM arms?

Out of interest, what is the TT likely to be?