Time for some sparse bluesy, jazzy, alt rock from 90s three piece Morphine. I had never heard of this band until fairly recently when I heard ‘You Look Like Rain’ on the radio. Good is the band’s debut album and was released in 1993. Frontman Mark Sandman famed for playing a 2 string bass is accompanied by sax and drums with the lack of guitar giving them a unique sound.

In July 1999 Mark Sandman collapsed from a heart attack on stage in Italy and died. 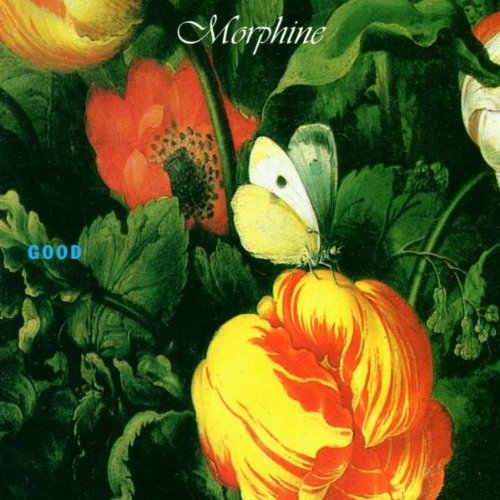 Available on Spotify and Tidal

I’m pretty sure I saw this lot play in 1994 or early 1995. I’ll look forward to revisiting the music as I never bought anything by them when they were active.

Not hugely sold on the vocals yet, but other than that a quick lesson has me completely sold. Will try and give it a proper effort later.

A couple of songs into this and I really like the sound. His vocals seem to remind me of something/someone I can’t put my finger on. Claire playing now. I think I’ll buy this

I didn’t know of them at the time, only appear on my radar some years back.

I’m a big fan of the saxophone in rock music (in fact, that would make a great book topic) and they make excellent use of it here. Dark, sparse and driving.

It’s not an album I have really listened to a lot so this is a good opportunity to hear it again and I look forward to it.

Hard to pigeonhole and certainly not unpleasant but also a little bland.

An archetypal 3 out of 5 album for me.

Hadn’t heard this before and enjoyed it.

Up until Track 5 I thought it was OK but 5 onwards it really seemed to pick up. As has already been said, the Sax works really well, integrating the smoky Jazzy Blues, Pigbag type backing rhythms and Gun Club’esque vocals.

Nothing else quite like it, although you can pick out influences.

I have banged on at some length about my dislike of flutes in rock music. I also have a particular dislike of brass sections in general and a vicious hatred of wailing sax solos (e.g. Careless Whisper or Baker Street) in particular. On the other hand flutage and/or brassage in Jazz is fine or classical music is OK by me. So the thought of bass, drums and sax alone would usually just make my teeth itch.

I originally came across this LP when it was mentioned to me by a mate at University in the early 1990s. I had developed a minor obsession with an LP called Birdwoodcage by The Wolfgang Press in general and an early tune they did called Rain Time in particular. This features a very skeletal rhythm track, simple but funky bassline, angular use of sax (i.e. short sharp blasts rather than sweeping flowing epic solos) and a deeeeeep voiced male vocalist.

I totally disagreed with the view that Morphine were like TWP, but liked the music then and still really enjoy it now. I like the space within the tunes, the original and interesting way each song is created, in cases using the suggestion of a melody rather than something very obvious. I didn’t buy this then, but I will track down a nice second hand copy at some stage.

4/5 as it is a buy at some stage and not already bought prior to writing this tedious, unfunny and long-winded post.

Hadn’t taken any notice of Morphine before this thread. I have been enjoying this and shall look out some of their other stuff. Great sounding record too.

Was a really nice choice.

I’ve played it and enjoyed it a few times.

The title of the album is a misnomer