My Icon Audio PS1.2 phono amp has gone down in one channel. I’m hoping it’s just a duff valve as anything else will be beyond me.
Valves are 2x 12AX7 and a single 12AT7WA. A quick Google says the AXs are ECC83. I’ve got a big box of NOS valves (old man was a TV repairman) and I’ve found some ECC82s. Can I replace the 83s with the 82s or will I cause damage?
Thanks

Thanks. Back in the box they go then.

This site is good for finding equivalents

Where’s a good place to buy some replacements?

Watford valves are usually very decent in terms of stock, service and price.

Watford Valves, one of Europe's leading suppliers of tested, graded and...

Watford Valves, one of Europe's leading suppliers of tested, graded and guaranteed valves to the professional music industry. We offer some of the most comprehensive testing facilities available today.

they will be good for the single 12AT7WA

Have you checked internal fuses before spunking cash on valves you might not need? No idea if it actually has any, but 5 minutes taking the lid off to check should soon tell you.

First thing is to, depending on the circuit, swap the 83s over to see if the problem switches sides.

Thick me never thought of that. Thanks I’ll have a go at that 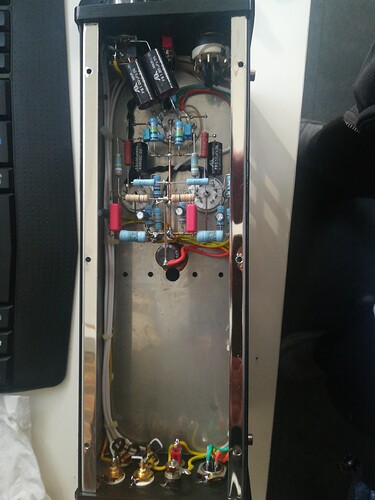 No fuses in the stage itself AFAIK, you can pretty much see the whole point to point circuit in that shot, other than an LED that pokes through into the upper casework for illumination.

This phono stage has a separate choke regulated psu, I have the same unit. I think the fuse is located in a caddy in the IEC mains inlet socket assembly on the PSU. Should be a 1 amp anti surge for a UK spec unit. Can’t see it being that tho’ as the phono stage itself is powering up.

Won’t be that fuse, as it’s only down in one channel, so ECC83 seems likeliest. 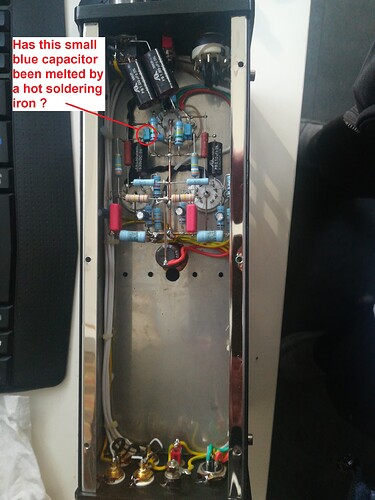 If it has and it’s (finally) failed short-circuit as a consequence then it will, I think, short the input signal to the final stage on one channel (half the 12AT7) to ground. Which will silence it.

If the fault doesn’t follow the ECC83s when you swap them over then that would be consistent with this explanation.

Thanks Graeme. I’ll be swapping on Wednesday. I’ll have another look at the blue thing first though

You’re welcome. It might be a false alarm. The blue casing on those little radial polyprops is quite thick and it’s possible to melt quite a long way in before reaching the capacitor itself. But once you do they’re at risk.

I did wonder if it could be a heater failure in either of the 12AX7s or one half of the 12AT7. But it can’t be the latter because it’s wired for 12.6V, with the two heater halves in series. So a failure in one would take both of them out and both channels would go dead.