Arse Emitter; fancy integrated or blow it on horns?

I’m sure I’ve heard one of these 4 boxers a while ago and loved it. Anyone else had one/ heard one?

I’ve heard a couple of ASR Emitters, but they were both in unfamiliar systems so it’s hard to know what was doing what. Both systems sounded nice though.

Did OB1 show one at Scalford? I remember Jim fancied one at some point too.

Yes, I visited Laurence (Martha’s Dad) for a listen to his, with a view to buy.

Although I liked the way it sounded, I thought the four boxes and all the monster sized interconnecting cables was a bit of a faff. Also the brightly coloured lights inside the units was offputting - I like nice gear but wasn’t struck on the Blackpool illuminations.

Yeah you have to think about where you’re going to fit 4 boxes. I’m guessing you heard this with his Wilson Duette’s at the time?

Can you remember, did he have the Dartzeel before or after the ASR?

I heard Martha’s too. Sounded great but as Jim says a lot of boxes to consider. The early versions just had one addition battery power supply. He was using Verity speakers. I very nearly bought a Mk1 version a couple of years ago but even the size of the main amp was too big to accommodate. They are huge.

I’m guessing you heard this with his Wilson Duette’s at the time?

No, not the Wilsons, I think they came later. Cant remember the name of the speakers he had at the time - err…

Fuck this getting old lark…

It’s all the shizzle that comes with it like power supplies that puts me off. Plus I hate blue LEDs.

Only heard it once in a system for 2 minutes, so no view.

Not a lot of love for the blue LEDs so far

The size is the biggest consideration- the amp itself will fit on my ‘hifi-sideboard’, its whether I can find space for the three rather large battery psu’s. Will have to go take a look in the flesh I think.

The blue LEDs are a bit Marmite.

I’ve not had the full monty set up, but have had and thoroughly enjoyed a couple of the slightly lower spec products.
OB1 certainly did have some ASR kit. On more than one occasion, IIRC, which suggests it is pretty good.

I just can’t work out the question where an ASR Emitter would be the answer. If you want a beefy solid state amp, why not Pass Labs or Modwright - they do 100W class A ones, I think. And not such a fucking stupid size.

Actually I’ve worked it out - it’s not a HiFi reason, it’s a penis size one…

OB1 certainly did have some ASR kit. On more than one occasion, IIRC, which suggests it is pretty good for profit.

OB1 certainly did have some ASR kit. On more than one occasion, IIRC, which suggests it is pretty good for profit.

Ownership of ASR kit pre-dated any commercial involvement OB1 has had with hifi.

Typically reviewers (not Real Reviewers ™ obviously), so clearly much pinches of salt required, report that the ASR has class A grunt, incredibly low noise floor, and a midrange that is usually found only from tube. What I remember thinking was fuck me that sounds good. 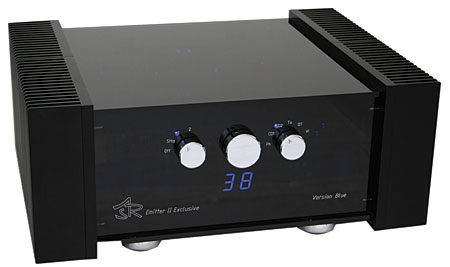 As you read this, are you listening to your stereo? Whatever the music, what you're actually hearing is your public utility's AC as modulated by your power amplifier. No matter how good the gear, the final result can be only as pure as the power...

Are batteries really the ultimate panacea? They have their issues as well, which they get round by using loads of caps. I’m sure you can get round their problems if you design the mains supply well enough. The best amps I’ve heard have not had battery power supplies.

I don’t want to rain on your parade, I’m sure it’s a really fantastic amp, but is it really going to win against something like Jim’s Pass?

Not in the stupidly hot and huge Stickle Bricks stakes… I think you are comparing one mad thing with another!

Always seeking out ways to give people back injuries.

Did you want me to convert it? Four 60Ah car batteries stacked should do the trick. It’d probably run 10 hours between charges to keep the battery discharge level to a sensible margin. Eight would be better - they could be charging white you listen to the other bank, allowing continuous operation.

Could we use the Definitive Audio battery mains regenerator system, but without regenerating AC?