Can You Pass a Basic Physics Test?

Don't worry, this quiz won't test you on quantum and theoretical physics, just the fun, real-world stuff that underlies everything from aviation to baseball to boxing. Get ready to show off your science savvy now!

100%. Although I will admit the question about the chronological order of the Physicists was a lucky guess!

Pedant point on the absolute zero question; it’s not degrees.

2 wrong, 94%. Simply not concentrating on diffraction/refraction.

But learnt newtons in standard measure.

The Krebs cycle answer is a bit odd, but helps discriminate I guess.

We can argue about buoyancy, and I would claim it’s as much a property of the (buoyant or otherwise) object as it is of the fluid. Whereas the pressure is exactly the force (per unit area) and the question was about what the force due to the fluid is called.

Light sure as hell is visible. They claim, wrongly, that light only allows us to see objects. Fuck off. If you don’t believe me then let me shine this laser beam into your eye.

Newton’s Laws tell us zero about entropy. Newton died in 1727. It was nearly a century later before the thermodynamicists began to get to grips with statistical mechanics. See here https://en.wikipedia.org/wiki/Entropy#History where it also points out, in passing, that Newton understood less than nothing about what heat was.

I thought that it was degrees Kelvin

No; from the wikipedia page:

The Kelvin scale is named after the Belfast-born, Glasgow University engineer and physicist William Thomson, 1st Baron Kelvin (1824–1907), who wrote of the need for an “absolute thermometric scale”. Unlike the degree Fahrenheit and degree Celsius, the kelvin is not referred to or written as a [degree](https://en.wikipedia.org/wiki/Degree_(temperature)). The kelvin is the primary unit of temperature measurement in the physical sciences, but is often used in conjunction with the degree Celsius, which has the same magnitude. The definition implies that absolute zero (0 K) is equivalent to −273.15 °C (−459.67 °F).

You would have been correct before 1967/8 though https://www.bipm.org/en/publications/si-brochure/kelvin.html.

I’m afraid their explanations contain some piss-poor uses of language too. Here’s one about buoyancy

Too heavy, eh ? Like steel, for instance ? Don’t tell all the people on the Woolwich ferry, which is made of, er, steel. It is pretty heavy, but not too heavy to float as a result of buoyancy.

I think what you meant to say was

Both solid gold and silver (i.e. not hollow pieces of those metals) are too dense (which is not the same as heavy) to float by buoyancy 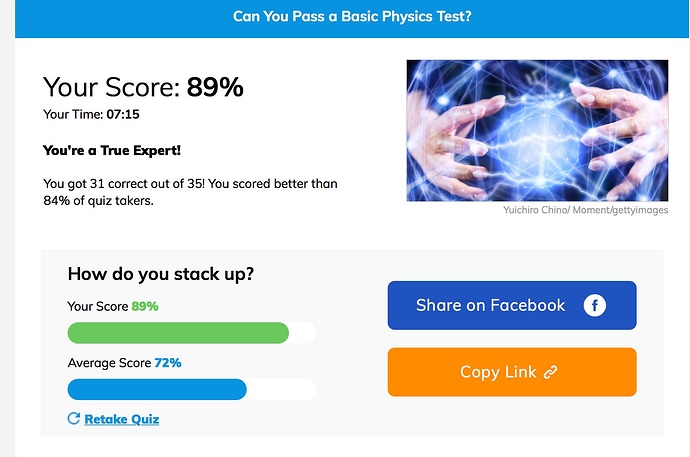 Guessed the correct order for the science geeks but learned about 1 newton. 34/35.

I knew the Newton question as Pro-Ject often quote tracking weights in mN instead of grams!

I think they get that from Ortofon

27 - quite a few ‘educated’ gueses and a few lucky ones too.

94% I knew the bernoulli one but second guessed myself and just didn’t know the ‘newtons’ thing.