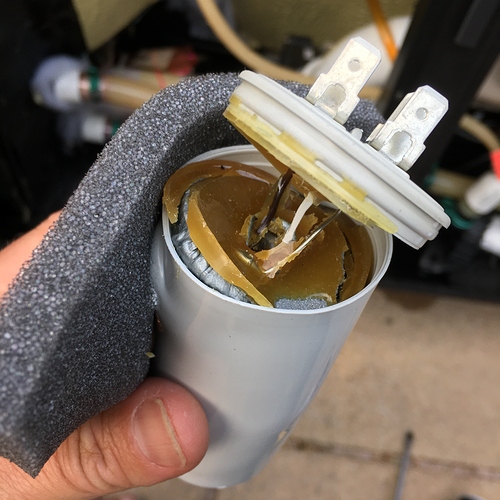 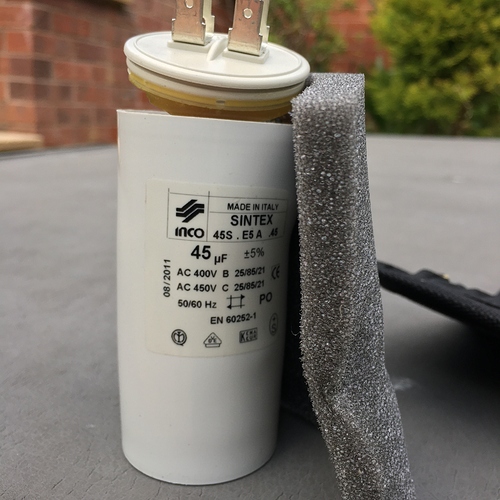 I need a new one of these. Run capacitor for a hottub.
No idea… I can find a Ducati 50uf similar but not sure if I have to stick to the same spec

Any help appreciated. Not sure if the mess I can see is just sealant or it has blown.

BOSCH Start Run Motor Capacitors (5 UF - 80 UF). This will enable us to assist you more thoroughly with your request and to deal with any difficulties. These parts are in no way associated with the initial manufacturer’s parts.

Reads zero on the fluke. If I’m doing it right.
It’s the run one for the jet pump. Which isn’t turning.

If you need a Run one then get a Run one. They’re rated for continuous use whereas Start ones are only rated for transient use. If in doubt fit a Run one. It’ll have a polypropylene dieletric.

In principle the circuit is tuned so you’d really want the correct capacitance. The tolerance is quite tight - +/-5% - so a 50uF one is noticeably different from a 45uF. I don’t know enough about motors to know how critical the exact value is though.

I linked a Run cap. A lot of things now use them as start caps too.

Makes sense. If you’re fitting a replacement the cost of the part is going to be a lot less than the cost of your time/trouble.

Some motors definitely seem fussy, so yeah, getting the right value is important.

I’d just get the one from Edd’s link.

Yeh, but this is a forum, so it’s vital to ignore all the good advice and fit a gerbil or a teacup or 8 yards of hessian twine or a partially-eaten egg sandwich or just get together and fucking pray for the old capacitor and empower it to decide its own fucking capacitance - cos 5G and the patriarchy is why.

Got that one. It’s from chesterfield so I may be able to pick up.

I’ve worked it out I think… Jet pump motor has got very hot (wife was in the damn thing nearly 2 hours!) and it has literally melted the underside of the capacitor that sits above it. I thought the foam wrap was glued to it. Seems it’s melted to it.

Hoping a new one for a tenner means no new pump and call out. Which is at least 500 quid!

Not sure if it’s actual use is run or start!!

wife was in the damn thing nearly 2 hours!

Surely it shouldn’t matter how long a person was in it, it still shouldn’t blow up?

Having rebuilt 100s of pool pumps, the caps do just fail. Not all have a start cap, some are just permanent run caps.

The first thing is to try a new cap. If that fails it’s new motor time, which can often mean new pump time depending what it is.

i am sure there are more natural ways to get the water to bubble.

I think the length of time the pump was running was the problem.
Way too long to be leaving it on, and it has just got too hot (hot day as well).
Googling suggested the caps and when I pulled this one out it was clearly spent. I just wanted to be sure by posting.

The pump turns freely when I use a screwdriver in the pilot hole. Fingers crossed it’s a ten quid fix. Damn thing just came out of unlimited labour five year warranty!

They are normally rated for 100% duty. Length of time shouldn’t be a factor unless it’s a really cheap and nasty one. Those caps when they let go tend to go all distorted and melty.

Turning freely just means it hasn’t seized, the winding could still be be gone.

The usual failure mode is the mech seal, so then you get water in the motor, bye bye motor eventually.

It’s all looks spotless inside. It’s a hotsprings (Watkins USA) tub and they are really well built. No water leaking and the triple filter set up should stop any cack getting into the pump.
Shouldn’t fail after five years.

We never use it for more than an hour. Two hours was unusual.

My hope is it’s just got too hot and popped. The pump was scalding to touch even when it’s been idle for hours. Like you say if it won’t work it’s the call out fee and a new pump. Such is life.
Cost about 200 but will sell for double as a branded spare I’m sure.

Is it normally scalding ? If it was just hot this time that might be the result of the cap gradually going west.

As for overheating - they’ll be selling these things for use in Florida/Nevada/Texas where it gets properly hot.

It’s inside the enclosure so I have never been near it. It’s worked faultlessly for five years.

After two hours (Ish) the pump just stopped.
I got it to work an hour later for the ten minute clean and then it wouldn’t work again.
Next day I sprayed some wd40 In the motor and it worked, but then refused to after and since. At that point I felt the heat and removed the capacitor housed in a box above the pump itself.

It’s simple. This works or I pay an expert. Water and electricity aren’t ideal to mess with.