Contemplating a return to madness

Dependent on the generosity of this years xmas bonus I’m thinking of re-entering the waters of hi-fi a little more deeply than I have over the past years.
Current system:
Speakers: IPL ST5L which aren’t going anywhere,
Dacs: Chord Mojo and Audio Synthesis Dax Decade SE (both used as pres as i have no analog sources)
Sources: Laptop, Chord Poly, Cambridge Audio NP30.
Amplifier: Technics SU-X860
Power Conditioner: Bada LB-330
Cables: Cobbled together horrors including speaker cables made from a combination of QED which isn’t quite long enough, bannana plugged into some off the reel electronics wire I use for work because the qed wasn’t long enough.

The obvious areas for improvement are the cables and amp.
Given that I have an A/S Dax Decade, the desire decade amp would be an obvious choice and indeed there are a couple about within budget, there’s also a Bow ZZ-1 which I lusted after in my early hi-fi days and various other bits of kit on the bay however I’ve also been thinking Hmmm, valves.
The thing is most of the music I listen to is of the EDM thumpy wumpy variety and I’m thinking a 3-40w valve amp might not be the best idea - the speakers are quite sensitive though so it might work.
I’ll also probably spend a bit on some new speaker wire and interconnects but nothing silly.

So after all that the questions…

Bonus points for anything with big VU meters on the front.

Is there a list of purveyors of 2nd hand hi-fi anywhere that I can peruse?

I would have thought that a decent pre could also be on the list, as the AS pre bit is OK, but not great.

The AS power amp is a bit meh, not sure it’s worth the money and I love AS stuff.

Bow stuff is great, looks lovely and works, make sure you get the Bow remote with any stuff, as they are unobtainable.

The world is your oyster with valves and good quality transistor.

Borrow some kit, get to hear it with your speakers as the IPL speakers are a bit fussy with amps. I would have thought a 100W transistor myself or a nice 50W class A.

I would have thought that a decent pre could also be on the list, as the AS pre bit is OK, but not great.

The AS power amp is a bit meh, not sure it’s worth the money and I love AS stuff.

Bow stuff is great, looks lovely and works, make sure you get the Bow remote with any stuff, as they are unobtainable.

The world is your oyster with valves and good quality transistor

If that doesn’t make you despair and fuck the whole thing off, then nothing will

Bin the IPLs, the amp is the better half of that equation.

You definitely need to sell the Mojo, to me, for 50p.

I will cover postage obvs.

I found hi-fi shark but it seems to just give me e-bay listings or those in outer mongolia, would rather keep it UK based.

I’ve heard various things good and bad about the desire, there’s also a couple of bits of Mark Levinson kit that tickle my fancy (a 383 and a 331 power amp) but again they seem to be love /hate things. There’s also some bel canto mono’s which are a bit over budget but I remember listening to a certain old forum denziens modified version and being rather impressed by the ‘thwack’.

The bow is certainly something I’d like but not sure if it has the remote. Was also considering going back to my naim days with a supernait as the mk1’s are about a grand now but not sure if i’m willing to delve that far into the madness.

Demoing is of course the answer but if I can remove some options before travelling miles that’d be good.

Technics amps, no they aren;t the best but they are (or were) cheap (mine cost £50 off gumtree with a tape deck, cd player and 4 speakers), they do seem to be going for stupid prices nowadays though, even for pretty average kit - I have a soft spot for their class AA current dumpers but no way would I spend more than £100 on one and certainly not the multiple thousands some optimists are asking for.

The IPL’s stay, I love the things, so mneer.

Gyroscope, no I cannot sell you my mojo for 50p or anything in fact.

Just tell us what you originally had in mind and we will validate that idea for you.

IPLs are played far too loud at shows by iQ with slightly rubbish Nord amps and are actually much better than that normally.

If that doesn’t make you despair and fuck the whole thing off, then nothing will

I’m a bit of a stuck record, but since these are a kit you could easily take them digital active with no concerns. Just start off with a 5.1 or 7.1 sound card and an extra couple of amps, or a six channel amp. Bypass the crossover and use JRiver to start with.

I had thought of that and looked at a few pro audio crossovers and 6 channel amps but to be honest it just seemed like a lot of effort and me being a lazy bastard well… that was that. 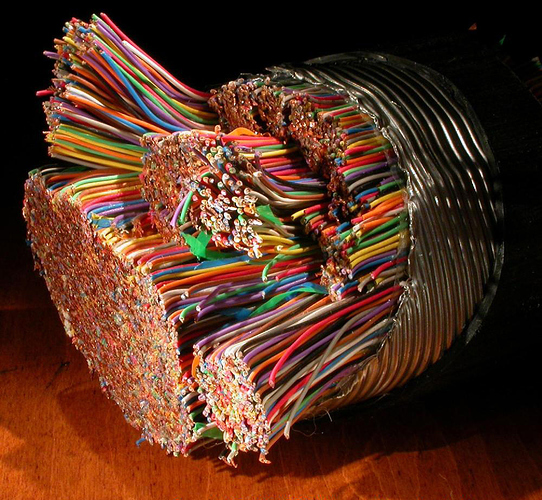 When UR cable cutter has to be a lightsaber

Thought that was the new foo cable you have brought in? Or is this the thinner version for in wall installation?