I just had Claire’s leftover steak. Wanting it hot, I sliced it thinly (about 5mm), and quickly fried the pieces for about half a minute each side.

While it was good, I did want a bit of crispness to it, whereas actually the oil made it a bit, well, oily.

What should I have done? Got the oil even hotter? It wasn’t smoking. Used a thicker pan to retain the heat better?

I did think afterwards of freezing it then frying it, so I could cook it for longer without overdoing the inside. Anyone tried that?

Steak should only be eaten bleu (except ribeye blah blah blah)

My suggestion would be to fuck off to america where they will do your steak nice and crispy.

It was that last night! Being a 12oz thick sirloin Claire cut half of it off immediately as just too big. Naturally I shall use this strategy again.

As JB hotter heavier pan will effectively just sear the outside.

I’m not a fan of freezing meat and most definitely not fish as I think it doesn’t taste as good when cooked.

She’s obviously not used to large portions of meat.

She’s obviously not used to large portions of meat.

Not in her mouth, it’s true

I was told an old chefs trick of massaging in balsamic vinegar before frying.

i usually season steak before searing with Thai fish sauce…

To which part of your anatomy?

Maybe I shouldn’t have been lazy and got out the cast iron then.

You should have got the barbeque going, changed into shorts and sandals and cooked it outside

I did think afterwards of freezing it then frying it, so I could cook it for longer without overdoing the inside.

Try coating with cornflour and shallow frying. Crispy but rare 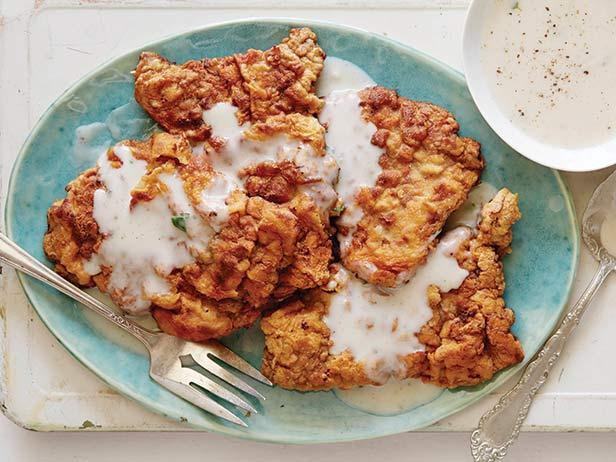 Why are you eating Weetabix with a fork?

That looks like a portion for me, what are you going to eat?

I saw an interesting programme that was a cook-off between Marcus Wareing and some scientist dude. Using real molecular chemistry, the scientist cooked the steak sous-vide, then in order to brown it he froze it for a while, then deep fried it. The idea being that just the outside froze, which allowed the inside not to cook during the deep-fry.

Although Wareing’s steak was better, due to copious quantities of butter!

You can never go wrong with copious quantities of butter

The only steak I’ve ever had deep fried was a ribeye, where a bit of extra cooking is actually desirable.