Do you recognise this transformer?

Long shot, I realise, but a customer’s been sold a 2A3 SE integrated and a pair of 300B SE monos by the widow of the chap who built them himself. So next to nothing is known about them. Frankly the construction is a bit amateur and the chassis are battleship-grade. But the iron on the monos looks quite nice. Each one has a mains transformer, an output transformer and two chokes. In each case the smaller choke is an Audio Note one (so he hasn’t bought cheap). The other choke and the two large (and they are large !) transformers are unbranded although matching in style.

I’m wondering if anyone happens to recognise the writing on the output transformer windings: 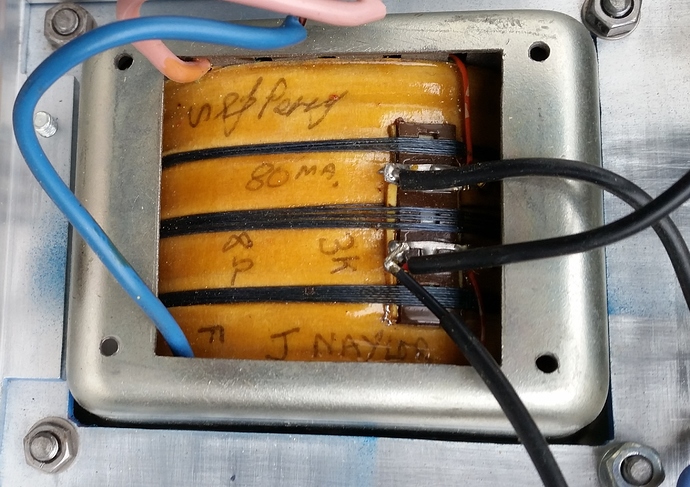 The transformer is 3k pri: 8ohm sec and is rated for 80mA DC primary current. The secondary leads are labelled S and F, presumably Start and Finish of the windings. J NAYLOR is written on in block capitals (might be the customer’s name ?). Then there’s what looks like a signature - surname Perry or Percy with initials which might be RJ (my best guess) or SF (who knows what’s going on in Mrs VB’s head ?). The lams are 4.5" x 3.75" EI (gapped, obviously) and the stack is 2.5" thick.

This could be the work of a garden shed enthusiast of course. But that’s quite a big tranny for an amateur to attempt and he’s done a very tidy job of all six matching pieces. Any idea who he might work for ?

Could be Perry Electric

Google is a wonderful thing. But I fear not …

I was looking at guitar amps by Naylor but it isn’t from one of those either.