How long have the Saints been this ordinary?
I didn’t think the Ravens were that great, but they didn’t have to try too hard to beat the Saints

Bucs actuality looking competent so far in Munich. They have been fairly poor the last few weeks.

What a hold by the Bills!

Allen throws an interception in the last few minutes of OT
Massive win for the Vikings!

I’ve watched the Vikings quite a few games this season. They’re very solid.

Watching Cowboys@Packers now. Pains me as a Niners fan, but I want Dallas to win this game (money reason). Not a fan of either team really, but this looked the best to me.
Just waiting for the late game really

Packers have been dreadful lately.
Well Rodgers has been dreadful.
Cowboys should win I think.
Niners is also late game here but too late for me. Will watch highlights tomorrow

Cowboys blew it giving away offensive penalties in OT.

Raiders just awful for the last 3 games (well not just the last 3), and the season has gone down the tank. Looks like managing the season now and hoping for some success in the draft.

They really are - they have no obvious weaknesses, and seem to have a great vibe, given how they played yesterday. The Bills played well, as well, tbh.

The Cowboys Packers game needed some alternate roles for overtime, where both teams could lose. They are probably my two least favourite teams in the NFL. I did like how this one was billed as “America’s game of the week” compared to the Vikings Bills game, duh.

As far as I know “America’s game of the week” is decided in advance and it is the game that is syndicated across the networks (and to foreign carriers like Sky).

It is not a judgement of the best game after they have all been played!

I know, it’s just marketing, but I did find it ironic

Just watched the highlights
Nice win for the Niners.
They certaily know how to run the ball.

I’ve just seen some highlights of the Vikings Bills game and I still can’t believe it.

Anyway, after week 10 the Vikings are propping me up despite my selection of the Steelers… 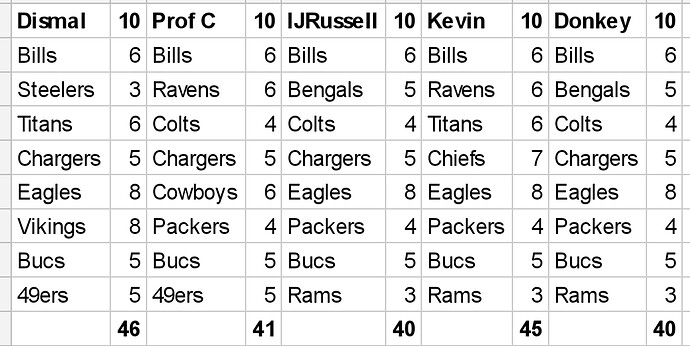 Thanksgiving is great!
Nice to see a midweek game at a reasonable time in the UK.
Bills and Lions putting on a good show

LOL, I think it’s just you and me watching this one

Entertaining game for sure, but I needed the Bills to win by 10

Cowboys offence too strong in the 2nd half