Import duty on alcohol from EU?

Just had UPS turn up with a parcel and invoice from customs and excise.
Ordered 6 bottles of limoncello and there’s a bill of €140.

Does anyone know about duty on EU imports?

As far as I was aware there is no duty within the EU, where did you buy it from as Switzerland is outside?

I thought the same.
Sender is in Italy.

Does it have duty stamps on the bottles?

I’ve not checked. Had to send it off with driver as couldn’t pay on the doorstep.

Actually just googling and I think it only applies to cigs.

get pissed and tell them to fuck off

all the gin I buy from Spain, I check that it is duty paid locally and never had a problem

So if sender didn’t pay duty I will have to?

Ah looks like they do need a duty stamp then 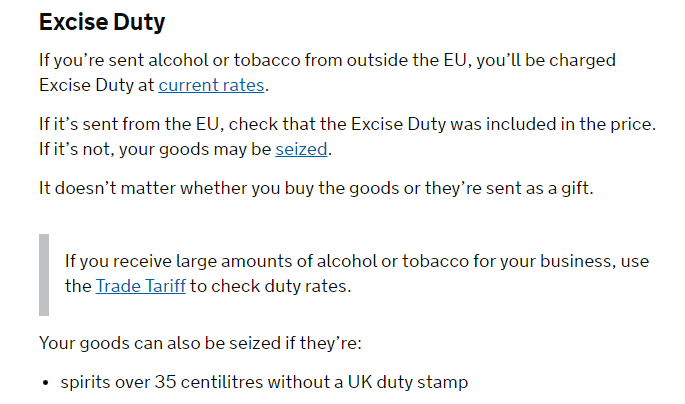 But the import rules seem to contradict…

I pay the duty in Spain when I buy gin, its included in the price I pay.

You can walk fags and booze in…

You can’t mail them.

It stops you just mail ordering fags from the EU at cheaper rates.
Same for booze, or why would anyone drive over and fill their boot up?

If you pay duty in the price you just end up paying English prices anyway, as it’s taxed at U.K. Rates.

Well the import bill is more or less the same price as the order was.

You pay HRMC a fee for the pleasure of adding the tax.

Designed to discourage the practice in the first place and make you buy here. Best bet is to cancel, refuse the order, and return to sender under distance selling regs.

And not make the mistake again.

Eh, at most you’d pay import duty and VAT which would be about 35% of the invoice value.

The courier will charge an admin fee of around £25

indeed that is true, but some of the gins I was buying were either very rare no longer made bottles or only sold in Spain.

Yes this product is not available in the UK.