Legalise sex workers because they should have the same employment rights and protections as everyone else. Tax their income like everyone else.

Legalise all drugs because people are always going to use. Tax their sale.

Take a sizeable proportion of the tax revenue generated to fund addiction treatment (since this frequently applies to sex workers as well as drug users).

Not going to happen because our politicians are all too conservative and terrified of Mail headlines.

The money saved on say giving out Heroin would more than pay for those ready to clean up.
Can’t see any gov having the balls to do it for years,madness really as it’s a very easy sell to the public.

Fuck all chance of anything happening.
the Government won’t fund treatment programs for people addicted to the currently legal taxed drugs.
Instead MPs are funded by the dealers (legal suppliers). Were ministers under the influence of drinks industry?

Fuck me you lot are keen to tax the shit out of everything. Black market price stability is refreshingly resilient,leave well alone.

We have private prisons and asset seizures. The Government already profits from the trade in drugs to pleasure seekers and sick people.

This thread is going well

FWIW I don’t think he was being judgemental, quite the opposite. Addiction is an illness, and it is exploited indirectly by governments.

FWLIW, I strongly agree with your OP - there are strong arguments for and against, but the clincher remains the fact that no matter WHAT is done, this shit will NEVER go away, so why go-on making people suffer more for their weaknesses than they already do?

Legalise and tax it all. Been saying it for years. Mind you with a radically religious country where nipples are more offensive than dead kids leading ‘the free worlds’ policy on these things it’ll never happen.

I strongly agree with your OP - there are strong arguments for and against, but the clincher remains the fact that no matter WHAT is done, this shit will NEVER go away, so why go-on making people suffer more for their weaknesses than they already do?

Yes, I agree. But why even describe drug use or visiting a sex worker as weaknesses? I see both as normal behaviour since we’ve been getting high and trading for sex since time immemorial. It’s our ridiculous hang-ups which have legislated against free choice to do so.

Of course there are consequences and those consequences (as you point out) will continue to exist regardless. Which is why I mooted the idea of tax-funded treatment for addicts (which I’d apply to all addiction) and protections for sex workers.

Makes sense to me. Bloody stupid it doesn’t happen.

Isn’t it possible that legalising the use of heroin might too easily enable some people to become addicted who otherwise wouldn’t? Also having witnessed a family member go through a severe episode of psychosis following what was likely over indulgence in skunk, I’m no longer feeling quite so liberal about the legalisation of cannabis. It’s potentially quite harmful particularly to young people whose brains are still forming.

A few years ago my son also had a psychotic episode resulting from use of cannabis (skunk). Very scary and made me too think twice about liberalisation. In a regulated environment there would presumably be more research and better public health advice. My son knew a lot more than me about drugs but not enough to realise when it was damaging him - the mental health nurses put him straight on that one however.

The problem with liberal ideas is the number of people you need to kill in order for those ideas to have any chance of becoming reality.

What we really need is an irony tax.

Essentially you need to start from an outcome rather than dogma for drugs, with the outcome being mimimising harm from drug use (harm being both personal and to society through addiction fuelled theft, gang violence etc.).

In a regulated environment there would presumably be more research and better public health advice.

Precisely. For cannabis, it’s the synthetic cannabinoids (‘Black Mamba’) which are the most dangerous and oddly until recently could be purchased legally on the high street.

Still, having in place support for people who make bad choices - and education - is a better solution to criminalisation which doesn’t work.

I’m pleased to hear your son recovered, and MJ’s relative.

To clarify my view.

We don’t have to look far into the past to note how effective a ‘war’ on substance(s) plays out.
The temperance movement / subsequent abolition of alcohol in the USA failed to ‘stamp out,’ ‘best’ or ‘cease’ alcohol consumption. Some of the ‘Wins’ of the War on Alcohol (Also a drug) was blindness from bathtub gin, violence, exploitation, widespread corruption etc etc.

A different contemporary approach can be seen in Portugal where Drug addiction is viewed as a public health issue as opposed to a criminal issue decriminalization occurred in 2001 - The results of this experiment have been impressive (Particularly as Portugal’s Heroin issue was rampant - 1% of the country used). Drug induced deaths have significantly fallen: 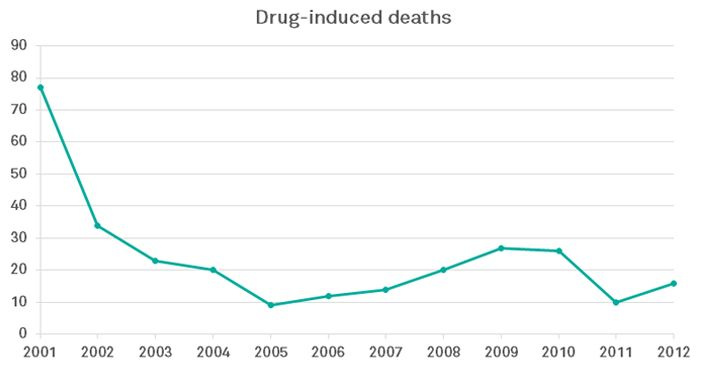 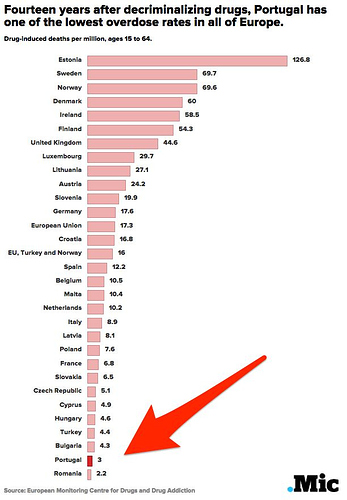 I do not see any of the above as a complete solution. Any individual who views chemicals as a life / emotional ‘solution’ or expresses a need to ‘get out of my head’ without asking ‘what is wrong with my head’ may well be heading for dependency. Manipulating the reward centers of the brain with chemicals can have very severe consequences for the individual and everyone they come into contact with.

I do not believe addiction is a crime and therefore should be treated as a public health issue. I can’t think of another illness that causes such harm to entire family units (See codependency)

Looking at the medical marijuana issue - I do believe science is now showing certain strains can have significant benefits for some illnesses. Cancer patients undergoing chemo, epileptics, severe autism, Parkinson’s disease etc etc. Israel and the USA are doing some interesting trials in these areas.

I find my views fluctuate of drug legalisation. I certainly don’t think that addicts should be punished, but liberalisation may well increase access and hence use. Ultimately I think that drug use (including alcohol) is much better as a social activity, so starting by allowing it in certain licensed premises would make sense.

Sex work is also complex - I think that the vast majority of sex workers are vulnerable people. Legalising it doesn’t solve this problem. That said, it could make things a whole load safer, and didn’t really have the downsides that legalising drug use might have.