So my current system is Sonos, a Primare i32 integrated and WB Arcs.

This occupies the same part of the room as the TV, soundbar etc.

The Sonos can’t be messed with, or at least must still be available when the dust settles (SWMBO likes it just a little bit).

To be frank it only gets listened to as (mostly) background music. Very occasionally I’ll do some serious-ish listening on my own, but it’s pretty rare.

Since I live in London space is always at a serious premium.

I’ve been toying with changing things around, to a point which most people would consider a downgrade, but hey ho, there are considerations other than sound quality: space, looks, and the chance to have a fiddle with a new shiny.

Random things that have caught my eye include

The Moon Neo ACE - great bit of kit, but definitely more of a side-grade. Same box count once I’m done.

Naim Mu-So - a music centre for the noughties. Would probably clash space-wise with the soundbar under the TV. And the soundbar is probably non-negotiable too. Hmm, then again I could plug all the HDMI crap into the TV instead of the soundbar, and take the digital out from the TV into the Mu-So.

Any other ideas? Must do all the usual digital stuff, and preferably cuts down on the box count. Maximum budget of a couple of grand.

What about the Devialet Phantoms?

Good point. I’ve thought about them a lot. Devialet have a miserable reputation for stability, although I have zero experience of using them, either positive or negative, I’m just basing this on the feedback on Devialet Chat.

They certainly sounded bloody good at the Indulgence show, and definitely fit the bill from a space and looks (i.e. no monkey coffins please) point of view.

Have Sonos myself, yet thinking of changing to Bluesound because of better SQ and future Roon integration.
Especially for fiddling, Roon is very nice.

Only saw this at the weekend but looked quite cool.

Weirdly I’ve got grudging wifely permission for the Moon.

Er indoors has a major downer on actives, I think primarily because they’re all in one, and she knows I’ll want to change it all in 10 minutes time.

Anyhow, I now need to contact O’Brien in my copious spare time.

It can, or will, even do HDMI ARC. This would be a serious plus to me.

I presume I’ll be drummed out of AA for even mentioning Naim, let alone contemplating buying.

They do song decent stuff. And some real shit…

It can, or will, even do HDMI ARC. This would be a serious plus to me.

I presume I’ll be drummed out of AA for even mentioning Naim, let alone contemplating buying. 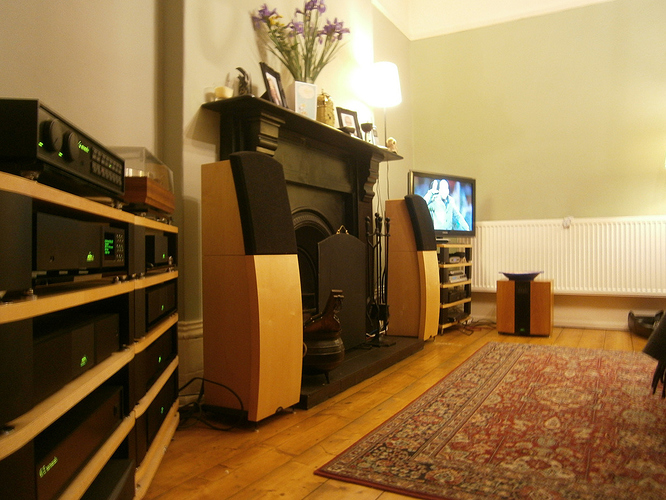 There speakers are a bit weird though

There speakers are a bit weird though

The speakers I used were SL2s driven actively. All the rest either sound shrill to be (IBLs, SBLs) or had lardyshit bass (NBLS and DBLs). The ovators were just awful. The SL2s were great, used hard up against a wall. My onlt criticism was the lack of depth to the stereo image, which is no surprise given the boundary reinforcement philosophy.

Think i’ve heard around 10 pairs at shows and peoples houses.
All have sounded strange,only ones that sounded ok were the nsats.

Think i’ve heard around 10 pairs at shows and peoples houses.
All have sounded strange,only ones that sounded ok were the nsats.

I’ve never heard a decent Naim system at a show. Invariably their speakers appear shouty and the music is either noodley or accoustic with breathy girlie vocals (or sometimes both at the same time). Dull and shouty doesn’t work for me. The worst was the S800 and Statement demo at the Naim factory just after the Statement was announced. That was hideous.