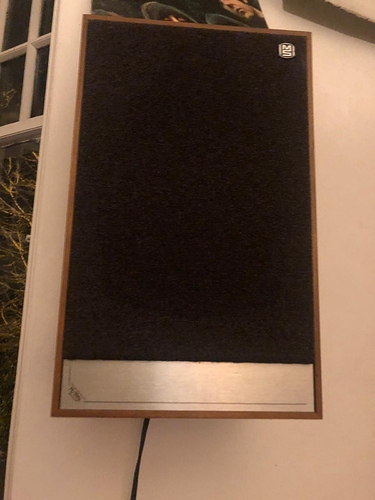 Or the ones Stu suggested. Hard to tell without the fronts off.

I suspect these might not be fussy about amplifier choice but what do you think?

The Arcam is a decent amp. The TT is fine if it’s set up OK. If there’s a problem with the system it’s obviously the speakers.

I suspect that either the speakers have degraded, and/or its in his cartridge choice/ poor set up (calling @J_B)

It’s the speakers (strictly speaking something else could be wrong too, but it might be hard to tell until you can listen through other speakers). I’ve got a pair of something like them out in the garage, picked up as part of someone else’s ‘you have to take all of it’ garage clearance. Sing out if he wants some more.

Yeah I agree. I’m going to take round FoL’s Heco’s and plug those in first try to eliminate/ confirm the speakers.

I think from chatting to him that his TT set up is sub optimal, and his 401 hasn’t been serviced for a couple of decades but these are secondary considerations.

I used an Armstrong 621 (40wpc) amp with my Mk 1’s. The Arcam should be fine, although the Pageant Mk 2’s didn’t receive very good reviews when they came out.

I suspect trying the Hecos will be a huge improvement.

Yes he was pretty sick when he heard my daughter’s system. She rubbed it in somewhat too

Those Hecos are much better then he expected and it really opened his eyes.

I suspect he would prefer a vintage style speaker, but one that gets somewhat closer to the sound quality level of the Heco.

Take an io with you

To eliminate the turntable as the problem, take a cdp or at least a phone with an appropriate cable to connect to his amp and use as a source. Many of those old MS speakers were intended for use against a wall but you need to see whether it’s a speaker/room issue or whether the speakers are just crap or knackered.

Yes the plan is to take my Oppo CDT with me and the Heco’s and use those to identify whether its source, speakers or both.

Also he has the speakers wall mounted.

I bought a pair of MS Pageants after a mammoth speaker review (50 pairs) by Hi Fi Choice back in 1976.
They won Best Speaker award and cost me £95.
I had a Rega Planer 2 and a A & R Cambridge A40 integrated amp? My main problem was my Stanton 500E cartridge because coupled with my Pageant speakers sounded far to bright. I cured this to a certain extent by replacing the 500E with a Stanton 680EE
The Pageants were a wee bit bright if I recall.
I replaced the Pageants with a pair of ATR Studio Monitors for a massive upgrade. (Still going for free!)