There’s a distinct possibility that I’m going to be taking over doing some / most of the cooking at the local English pub. The current menu is rather dead on its arse and far too Brake Brothers at the moment, imho. I’m putting together a list of dishes to consider, but would be interested in what sorts of things everyone else looks for on a pub menu.

Want to have a fair few options that I can have on a rotation, probably only have 3-4 mains on offer at any one time, keep everything as fresh as possible.

There’ll be big argument over whether a steak and ale pie is a pie (with a bottom, probably soggy) or a stew with a lid.

I’m told there’s a demand for gluten-free too.

Pies definitely have a bottom in my book. Will need to have a bit of a play to make sure I can get it in a state that I am happy with it.

Could probably do it as a steak and ale pudding with a suet based crust in the mean time.

We don’t get a lot of veggie / gluten free round here, so whilst I do need a couple of different options there’s not likely to be a huge amount. The French are notorious for not catering to them at all!

I would say though,do a small menu,but with shit hot quality.

I would say though,do a small menu,but with shit hot quality.

Yeah, that’s definitely the plan. I’m really, really not interested in dishing up half arsed food in the slightest.

I would say though,do a packet of Uncle Bens

This sticky toffee pudding from the ‘Baps’ thread is pretty cheap & easy to make & tastes great. 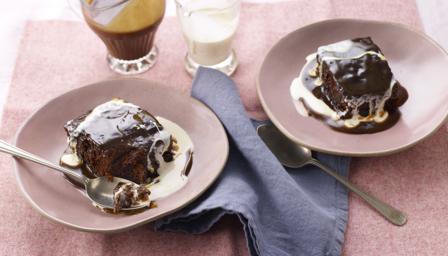 Sticky, gooey and surprisingly light and easy, Mary's sticky toffee pudding is a winner. Baked in a large dish, this is a family-sized pudding, spooned out or cut into squares to serve. For this recipe you will need a 1.7-litre/3-pint ovenproof...

Chicken Tikka Masala if you want the authentic British feel.

Just went down and had a chat with the guy who currently runs the kitchen and he seems very keen; he isn’t really a chef and I think is quite bored of the whole thing.

Just need to have a chat with the other partner and we should be good to go.

I think you’d probably need an AA munch up to give a better verdict on the quality.

If I were catering in this way I would have a few high quality slow cooked items like beef shin and lamb shank as well. They are fairly easy to prepare if you have time, and always seem like a bit of a treat on an otherwise fairly bland menu.

Chicken Tikka Masala if you want the authentic British feel.

Has to come with half rice half chips

Yeah, that’s definitely going to be part of the plan.

Also a pretentious burger as they cook nice and quickly.

we rarely eat pub food, but the best I had recently* were really simple, and good quality stone baked pizzas. All the better for being on the late night menu as well.

*In case anyone was wondering which pub I was on about - it is the Lion and Lobster in Brighton - http://www.thelionandlobster.co.uk/