Record Store Day 2019 for those who can be bothered

For the first time, the albums I fancy number in double figures.
However, there are NONE worth standing for hours with a bunch of bald, poorly dressed, middle aged men with poor personal hygiene in the pouring rain, for the pleasure of spending my hard-earned money to stores that are (mostly) just cashing in.

Thankfully nothing on the list tickles my fancy this year.

Chase & Status and nothing much else that I don’t already have.

Couldn’t even be arsed to look at the list this year.

Couldn’t even be arsed to look at the list this year.

Anyone know if the Spacemen 3 live double album will be decent ?
Seen it’s on cd already…
I won’t be going but may look online when it’s done.

Ólan @htm_1968 is probably your man for that, although he was fulminating about the last lot of Spacemen 3 stuff that was released for RSD, the guy who runs the label that released them apparently screwed the band over good and proper. Allegedly.

So if it’s being released by the same label, be prepared for him to advise you to boycott it, no matter how good the programme material might be…

I recall.
But I do t know what is manager milking and what is band approved…

I recall.
But I do t know what is manager milking and what is band approved…

None of it is band approved at the moment as far as I know. There are/were proceedings issued so the direct releases via Spaceage seemed to stop only to be replaced by ‘licenced’ reissues. If is is ‘Live in Europe 1989’ then it is OK as a representation of SP3 but the sound quality is pretty poor in places. Pete Bain used to update things via his blog, but this has tailed off.

If I had a turntable I’d have liked the Bark Psychosis double LP.

Is it wrong that the only thing that’s got me excited about RSD 2019 is the Crosley mini ‘8-ban’ turntable?

Is it wrong that the only thing that’s got me excited about RSD 2019 is the Crosley mini ‘8-ban’ turntable?

No, ss long as you only play your own records on it and don’t sulk when they are knackered.

It only plays specially made 3” records!

It only plays specially made 3” records!

In which case: MEH! (Although I do have several 3" singles, notably by Spectrum) 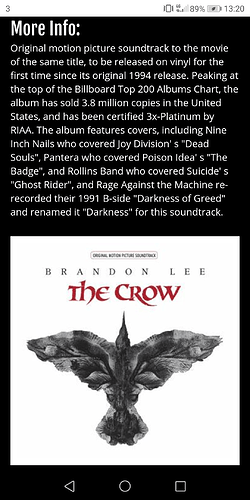 Ah I might be bothered to get a copy of that as it has the singles from before their debut IIRC.

About three I’d fo for. But not enough to get up and queue.
If anyone is braving it and can help let me know. If not I’ll gamble on the online sale a week later. Or head in Sunday as I’m at work and can hit rough trade at lunch.

Unless stuff tends to vanish on the day!?

I woke up early last year and, seeing it was a sunny morning, popped down on my bike to Rough Trade in Bristol for about 7.30.

There were 200 people queuing already!

I decided to wait and it took about and hour to get in the shop. Was worth it as I picked up all 4 items I was after.

Not bothering this year as there is probably only one LP (Bardo Pond) that I would buy.