I don’t know if anyone else has this problem, but I know quite a few of you are friends on Facebook with Doug Adams. Since yesterday I have been bombarded with requests to join Hi-Fi recommended by Doug, I must have received close to 100 in the last two days. I have mailed Doug and he has assured me that he isn’t sending them. I blocked him and unfriended him this morning, but still they come 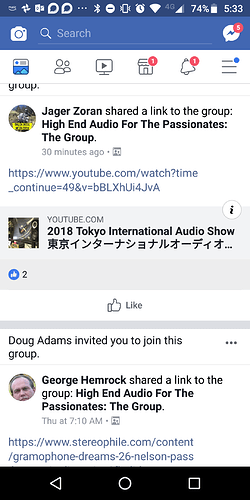 I’m so close to doing it. It’s only a couple of dog-walking groups that organise events on it that keep me on.

I ditched mine last year, best thing I’ve done in a long while. Mostly Intrusive bollocks.

HIfi facebook groups are shite without exception
I got really pissed off when I was auto enrolled to one a few months ago.
Even though half the people on the Wam and quite a few from here were on it I left straight away, how does that facebook software allow that sort of thing?

I find it very useful for contacts re work, overseas relatives etc,

I spent the first year on FB putting posts up weekly,i did wonder why no one ever liked any of it.

Was only when i checked the settings that i realised i was the only one who could see my posts.

But you also follow loads of groups and copy and paste shit from everywhere.
The more you do that, the more you are exposed to being targetted.

I know Doug, decent chap. I did get a recommendation to join a turntable group (I think) I joined and didn’t think anything of it to be fair.

As I said I’m sure it’s not Doug’s doing.

I’m so close to doing it. It’s only a couple of dog-walking groups that organise events on it that keep me on.

It’s not my group.