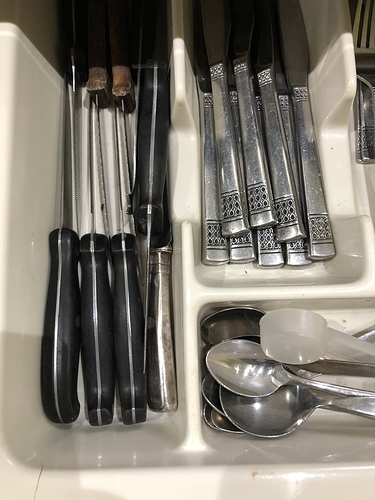 Like anyone we only chuck our stuff in the drawer, laying it out like this is Impossible.

Neither of us (admits) to having anything to do with it.

I spent years fucking with people’s (including my Mother’s) heads by doing stuff like that. Someone is ‘avin’ a larf.

We bought this (4-bed) house from a family who’d only been here 18 months, then fell on hard times. The previous owners, Terry and Iris, had had it 20-odd years and had moved to a smaller place at the other end of the street after their kids left home. A few months after we’d moved in Iris asked us, uncomfortably, if anything ‘odd’ had happened in one of the front rooms (the one I’m sitting in now, as it happens). She said they used to come down in the mornings and sometimes find things on the mantelpiece re-arranged. We said no, nothing had moved (it still hasn’t) but if a poltergeist fancied dealing with the dust then we’d be much obliged. We suspected the kids.

I kind of wish I could OCD in my sleep and wake up with well ironed pants.

This was overnight. Only the two of us were in , the collies have no thumbs to speak of so are in the clear.

She is a suspect, but is in denial.

She is a suspect

I’ve sleepwalked at least once, many years ago, and been completely unaware of it. I don’t think I do it any more - it’s almost impossible to get out of bed without waking Mrs VB (but maybe I galumph less if I’m still asleep ?).

Of the many ailments available to mankind I would imagine sexsomnia may have some upsides - on balance there may be some crashing lows.

Like anyone we only chuck our stuff in the drawer, laying it out like this is Impossible.

Neither of us (admits) to having anything to do with it.

I thought you meant someone had put one of the black handled knives in the wrong way. I can’t sleep thinking about it … I hope you have corrected it.

If there’s going to be any OCD ghosts around here I hope they get the urge to rearrange when the dishwasher is empty and the sink is full.

An old colleague came down in the morning to find his cutlery drawer had been emptied onto the floor.

He gave his (very young) son a row about it. Made a coffee and sat down to get his head together when he realised that the blank space he was staring at had had a TV in it the previous night.

His fancy Audi had gone too.

We have two dishwashers for this purpose. I still prefer to put in the cutlery drawer in the right compartment and definitely facing the right way