What price a living wage?

This. It’s what the cab business, like a lot of other businesses, has been about for a very long time. The black cabbies don’t care at all about Uber customers’ safety. Indeed it would benefit them if Uber’s customers continued to feel scared of their drivers. What they care about fundamentally is that the Uber drivers are prepared to work for less money than they are.

As BobC said, they will drag this out for a while with appeals. Then they’ll do the least they have to to comply with TfL’s objections. It won’t cost them much.

I get that uber compete on price but convenience is also a factor. Perhaps the black cabs could enter this technical century?

The estimates I’ve seen for uber driver pay are around £19,000 after tax and NI, or about the same as the starting salary for a London bus driver set by TfL. I’ve no idea how anyone could live in London on that wage, but they do.

Perhaps the black cabs could enter this technical century?

They are doing, in a way. That’s what the mytaxi app does - allows you to ‘call’ a black cab from your phone and even track it as it approaches you, I think. There’s a similar app for minicab companies too. I think there are 20,000 or so black cabs https://en.wikipedia.org/wiki/Hackney_carriage#Black_cabs. There are 40,000 Uber drivers. I don’t know how many traditional minicabs there are. If the Uber drivers are put out of work it’s not clear that there will be enough black cabs to take up the business.

Where I live in East London, the Uber service is excellent. There’s always an available Uber car nearby, day or night. Far, far better than the local mini cab service, which was/is rubbish. You’d call them, be quoted 10 minutes and the cab would arrive 35 minutes later after several further calls.

My two daughters also think Uber is great, especially if they’re coming home from the centre late at night. Before, black cabs were like hen’s teeth after midnight and all of the popular areas in the West End were crawling with touts for unlicensed mini cabs.

I’ve no idea how anyone could live in London on that wage, but they do.

The last minicab I got in London was a Romanian guy about 50; his kids had moved out so he came to London with his wife. They were living in a single room, the rent for which was almost half his salary.

This hardly seems sustainable, or something to aspire to.

I guess the world, including Romania, is full of poor people. Some of them become Uber drivers in London where, despite their genuinely tough circumstances, they feel they’re (a bit) better off. As long as they haven’t actually been enslaved, either directly or through some kind of debt trap, they could always go back home if things were better there. If things are in fact (a bit) better in London then we have to decide whether the best use of resources is to concentrate them on lifting that limited number of people even further up the poverty/prosperity ladder or to spread them more fairly across the poor who are still stuck in Romania, or even worse places. There isn’t an easy answer to this.

Unusually in the case of Uber drivers we’re individually in a position to make a small difference. If we feel that they’re being unacceptably exploited then we can work out the black cab rate for the same journey (maybe twice the Uber rate ?) and press the difference into the driver’s hand in cash. We can’t do that for kids making trainers in Asian sweatshops or farming cocoa in the tropics.

There’s plenty of Corbyn supporters who are turning against him on social media tonight because of where he has placed himself in the uber row. 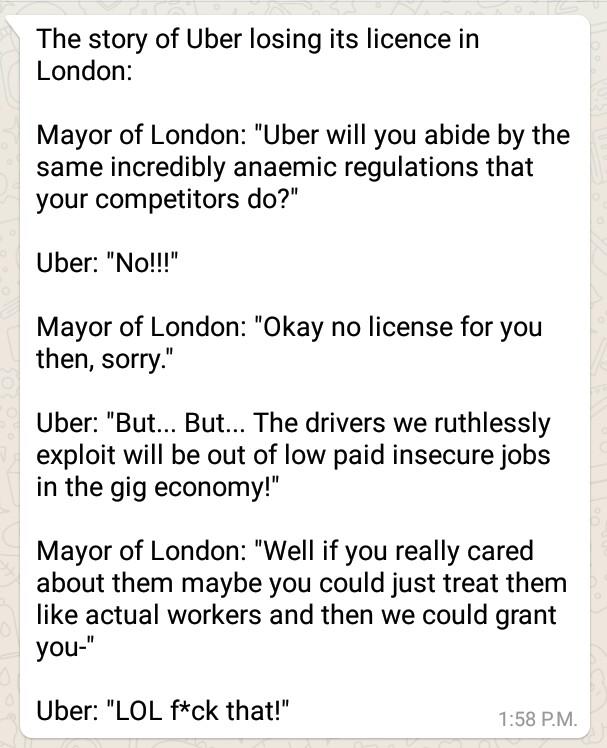 I don’t doubt uber has played fast and loose with the rules. Just remember the thousands who are being punished for it.

So the answer is to let a bad company carry because people like them?

It may be a bad company, but it’s presently a bad company tens of thousands are relying on for their livelihoods.

Ubers actions in Mumbai are quite appalling

The last Uber cab I used I had to point out the way in the City Of London, he got stroppy when I pointed out he was going the wrong way. Never again.

The thing is, the work is out there, so the drivers will easily find work with other cab firms, who seem to have no problem adhering to the law.

Pretty much every cab firm has an app these days that performs most, possibly all, of the functions that the über app does.

How do you know if minicab firms are more compliant with employment regs than uber? I’ve absolutely fucking no idea if they are! Nor do you (out of respect).

What I’d like to see is proper scrutiny of the allegations made against uber for the benefit of those who work for them. I don’t trust TfL to do have done this.

Well, my BiL is a minicab driver, sooo…

Admittedly, I live a long way from that there London, so I am relying on hearsay as far as London goes and I accept that if New Cross cabs Ltd lose their licence it’s not going to be national news.

I don’t trust TfL to do have done this.

What I’d like to see is proper scrutiny of the allegations made against uber for the benefit of those who work for them. I don’t trust TfL to do have done this.

The allegations about not reporting crimes were made by The Met not TFL, they also questioned their adherence to private hire requirements and reported them to TFL.