Fink - Wheels Turn Beneath My Feet

Live album recorded during the Perfect Darkness tour in 2011-12. Stunning sound quality and awesome songs in one 79 minute package.

Wheels Turn Beneath My Feet

Wheels Turn Beneath My Feet, an album by Fink on Spotify

Wow this is amazing! How the hell have I missed this?! Nice one, thanks! Will be grabbing several albums.

Video quality is terrible, but this is imho FINK at his very finest, playing with Manu Katche and Pino Paladino:

An excellent album Ian and already in my collection…

…but thanks for reminding me to give it a spin! 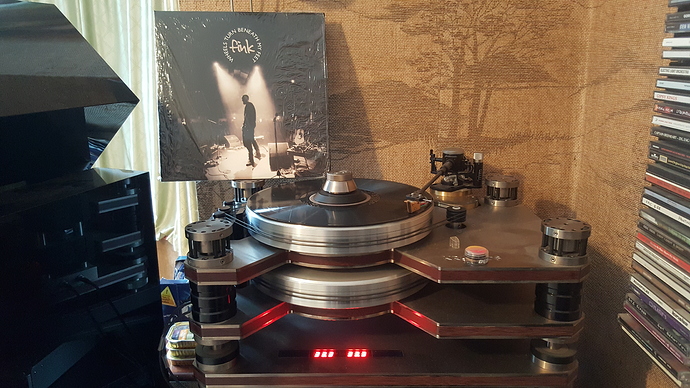 Great album.
Not easy to get a copy on vinyl unfortunately but it is a great listen.

I would very much like to hear this on LP. The TIDAL stream is very bright and quite compressed. It was much, much louder than the LPs I played before and after which didn’t help. It seems like a nicely recorded LP despite this. The guitars are beautifully played and recorded. I am less convinced by the vocals, which are a bit too much for my tastes. Having said this, I knew nothing about Fink and enjoyed listening to this. I’ll try to listen to some of the other albums but suspect I won’t end up buying much at this stage.

Beautifully recorded and mastered but I doubt I’d miss listening to it again.

Beautifully recorded and mastered but I doubt I’d miss listening to it again.

Here I found something more interesting;

Very much my thoughts.

I have heard various tracks at bake-offs where it seems to have supplanted Nils Lofgren Acoustic Live as the ‘look how good it sounds’ choice.

Don’t get me wrong I quite liked it but it all became a bit predictable and his voice is not my cup of tea (well he’s not a pretty girl is he😘).

I listened to this a few years ago and not again until now.

As has been said, amazingly well played and recorded but his voice is too forward / loud and seems to have only one lilt.

That is a real shame, as there are some great tracks (e.g. Blueberry Pancakes) musically, and the Album as a whole is fairly musically diverse, interesting even.

It’s just that his voice seems to make everything sound the same, a bit like Nick Drake does.

Too much singing in an annoying way, not enough funk.
C- could do better.

All very “audiophile” except it’s got a bloke who can’t sing instead of a female.

It’s good to be back

Surely you are used to that with prog

It’s good to be back

We know a song about that!

I quite enjoyed this - first time I’ve ever heard him and must admit quite impressive for a live album. Not something I would buy on vinyl but will investigate him further on Spotify.