Yes it’s late, yes it’s gospel. Clue: if you don’t like gospel then you probably won’t like this much.

However if you do then you’re in for a treat, especially if you’ve not heard this before. Released in '71and featuring an ‘amateur’ choir recorded pretty much live in the church, this album makes a strong feature of classic call and response vocals, and the dynamic rush of the choir really giving it the full beans. Add in some funky bass and piano groove and you can see why it’s been sampled by Kanye and Alicia Keyes amongst others.

It’s just been reissued on vinyl and sounds majestic with the volume up and when they’re in full flow. 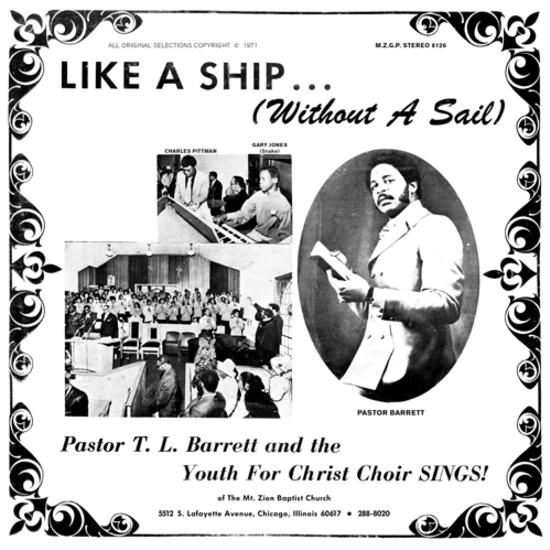 The Quietus | Opinion | The Quietus Essay | Without A Sail: The Complicated...

The music of TL Barrett has been acclaimed by Radiohead, reissued by Light In The Attic, and even sampled by Kanye West earlier this year. But, asks Daniel Hornsby, what are we supposed to make of transcendent religious art when it is made by a...

Could someone add a Spotify link too please? 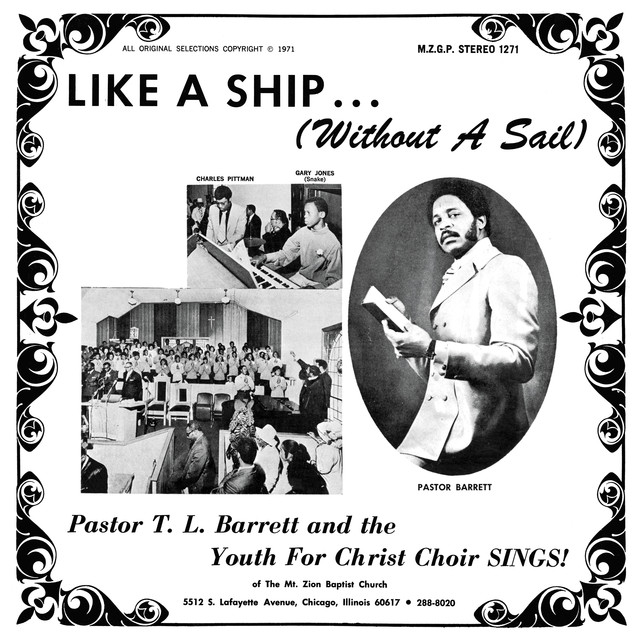 Like a Ship (Without a Sail), an album by Pastor T.L. Barrett and the Youth for Christ Choir on Spotify

The opening/title track is truly exceptional and truly magnificent. Particularly the final 60 seconds (after the false ending) when they pull it back for one last, extended chorus. Sublime. I listen to it quite a lot.

The rest is very good, but it never quite hits that high again.

fantastic , thanks will grab a listen to that

Hopefully it’ll be worth the wait

I’m not a huge fan of gospel to say the very least, although there are bands I do like who have been very influenced by gospel structures. ‘Like a ship’, the opener and title track is a stone cold classic. You could see this going down a storm as a cover version by Primal Scream circa 1991/2.

I preferred the up-tempo numbers, whether the Pastor kept out of the way, and avoided the tiresome vocal gymnastics.

On the plus side I was very impressed by the rhythm section on this LP, who kept it simple but very funky. The simplicity of the music is a joy when it works.

On the other hand, I actively dislike the plinky-plonk dirges like ‘Wonderful’, which is just an opportunity for the Pastor to show off. Tedium on a stick, only saved by some judicious use of the Hammond organ.

Yeah almost everyone I play it too absolutely loves the title track and then unless they like gospel, lose interest in the rest of the tracks. Repeat listens help you to appreciate the groove.

Repeat listens help you to appreciate the groove.

I’ve listened to it multiple times Wayne. I’m afraid that all that this helped me to appreciate were the bits where the Pastor left the band and the choir to get on with it.

Interesting LP though as gospel is an area I have avoided in the past.

In a similar vein, here’s another lost religious classic. This is a whole new style of minimalist gospel…

I agree with you, the choir in full flow is much better off without the Pastor, and the title track is the best example of this.

We were probably listening to some of the same bands who infused bits of gospel in their music (primals, SM3, spiritualized etc) - although I had gotten into gospel before I heard these bands, it wasn’t till much later that I heard the title track and realised that what was I was looking for.

I really like this. I’m not religious (or otherwise) but there were some lovely tunes in this. 4/5