Going to change amps in the near future.
The AI 300 gives out a low hum through the bass units which does annoy me on quiet stuff.

Going to sell off loads of stuff I have to raise the funds.

Will be 2nd hand and only £700 budget
Be nice if it had built in phono,but not a deal breaker,but needs to have 4 line inputs.

Not sure if I can get much better soundwise over the ai,but would be good if I could.

Ideally valve,but would be fine as long as it sounds good.

I’m in no rush as I have another amp I can use,and don’t have the funds

Can the low hum thing be fixed @Valvebloke or @murrayjohnson ?

It was serviced last year with new valves etc but he couldn’t get it any quieter
Guessing on most speakers it would be fine.

Come and get the Pioneer

Audion Sterling could be worth a look, or AN Oto?

I love my old reliable Bryston B60 but not sure if it’s a good match for your horns.

As it happens I have an AI 300 Mk2 on the bench right now. Unfortunately my bust right hand means I haven’t been able to touch anything for 10 days.

I’d just got started on it. IIRC even when working properly it does have a bit more hum than typical ECL86 PP amps do. Various things can make that worse, so if Stu’s amp has unusual levels of hum then there may be a fixable fault. But given what he says about the service that seems unlikely.

The fact is that the amp is quite sensitive and I think there’s relatively little negative feedback (NFB does suppress hum, as well as other forms of noise and also distortion). So it starts out being potentially prone to hum. The signal grounding arrangement is also slightly unconventional, which might be contributing. And the signal wiring behind the controls, and the controls themselves, aren’t heavily screened. So there are ways in for hum there. As far as ‘fixing’ anything goes, the amp is built on a pcb and the ground track does wander around the houses a bit. But because it’s a pcb there’s little option to re-route anything without quite major work.

And IIRC there isn’t an awfully stiff power supply (no choke for small signal stuff for example).

Buy my new Minuet for a lot more than I paid for it?
(it’s not for sale though

What Brand is your amp Stu?

It is only 4 years old and I have used it less than 1 hour a week. So it is in immaculate condition. I have upgraded the valves (see below), the original valves will be included. Capacitors have been replaced with audiophile quality Russian PIO...

The HT supply is an RC chain. In the amp I’ve got one of the C’s had failed and that was creating a good deal of hum. But replacing them all with new somewhat higher value ones didn’t improve the hum performance over the original set when it was fully working. I seem to remember the spectrum was dominated by 50Hz and its odd harmonics which points to pick-up from stray mains field as the dominant cause.

This might do ya. I was looking at this for a second system but he won’t post. He put it up a week ago at £670 and had no bids, relisted/dropped it to £630 and has only just got a bid in the last hour. It comes with the cage as well, as I asked. 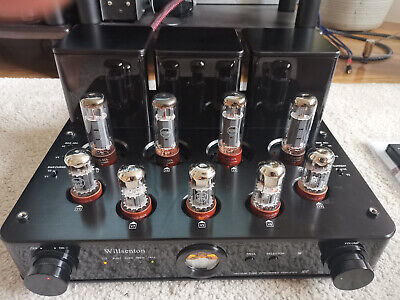 Upgraded Willsenton R8 Valve Amplifier in mint unmarked condition. Due to its weight (over 58lbs) its collection only from Sutton, Surrey SM3 9JS.

@Stepmotheratomicbomb still has my WD88VA I hope, and the offer for a long term loan still stands. It is a one input setup with volume so it would a separate pre or switchbox/phono.