@puresound what’s the story with the Preda III?

Are the 300B amps in the foreground products? They look quite nice 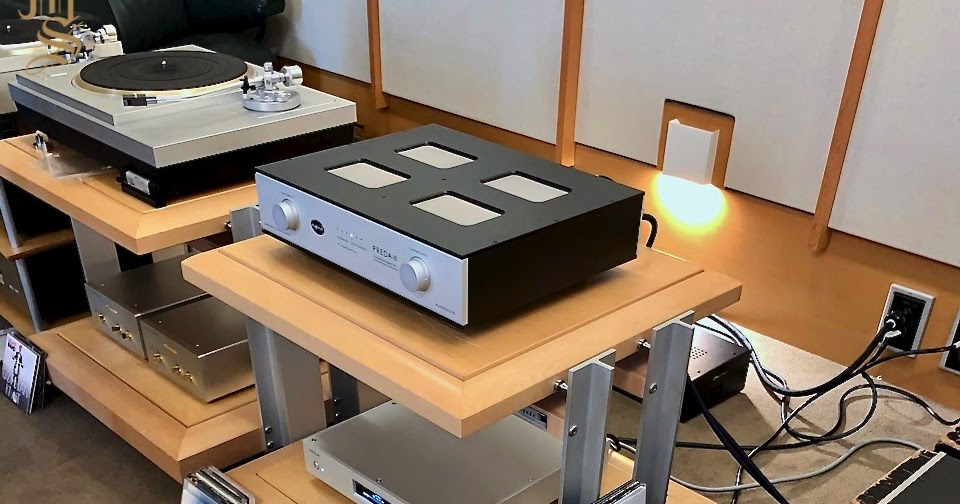 The new Preda incorporates a 4 channel ALPS attenuator that Karaki has really taken a shine to. It is included in his True Balanced Signal Path architecture along with some newly revised amp modules. RRP will be about £10K.

The power amps are called PADA 300B and are a hybrid PP design with with a JFet input stage transformer coupled to the 300Bs. I haven’t heard them yet. RRP is about £16K.Still saving up for a demo pair! They can be ordered with the PSVANE or the Takatsuki 300B.

The sound is stunningly transparent with full of delicacy and freshness.

Mr. Karaki focuses on the advantages of vacuum tube as power amplifier device, yet, his circuit design placed the transistors in the front-end (voltage amplifier), and the tubes in the output stage. In the past, Aurorasound introduced front-stage amplifiers such as a Phono Equalizer Amp, and a Preamp using transistors. However, the previous power amplifier already in the market, PADA-EL34, uses discrete transistor circuit in the input stage, and vacuum tubes in the output. The pre and the final stages are coupled with FINEMET Core driver-transformer. With use of transistors in the preamp frontend stage, low distortion, high S/N, and wider frequency range is achieved.

The push-pull configuration with two 300Bs delivers 28W of power output. It should be noted that the shown power output is rated at 2% distortion, and this distortion rate is low for vacuum tube specification. In actual usage, this model is expected to deliver higher power output. The 300B has excellent linearity, thus PADA-300B has no negative feedback loop in the output stage. The filament of 300B is heated with AC current, not DC, because Aurorasound respects the original design scheme of using AC when the 300B was initially developed. Even if a hum noise is generated due to AC use for the filament, it can be cancelled due to the push-pull design structure. (It has a hum balancer, as well)

*Mr. Karaki is meticulously into parts selections as well. The front stage uses semiconductors, J-FET and Bipolar Transistors, specifically developed for audio applications by NEC and Toshiba. These parts are no longer in production; however, Aurorasound maintains ample inventories to meet any demands. In addition, the output transformers and choke coils are of Lundahl in Sweden. These transformers are not encapsulated in plastic resin, in other words, they have open structure, which represents openly expansive feeling of sound, as well. *

*An evaluation listening was conducted at the Stereo Sound’s listening room using SACD/CD Player, and Accuphase system with B&W 800D3 speakers. *
When the Track 8 on the CD “BARBARA/Bobino 1967” was played, where BARBARA sings only with contrabass and accordion, the sound had such delicacy producing even faint vibrato and slight breathing vividly. The church music “Hodie” has ultra-high S/N, astonishingly transparent sound. You could almost visualize the layers of the chorus ensemble floating in the air. It was also amazing that such low frequencies from the pipe organ were accurately produced. “The Rite of Spring by Stravinsky” conducted by Salonen on SACD disk is known to have an extremely wide dynamic range. So, in order to test how well the amp can perform, I increased the volume level without hesitation. I felt no concern when the 800D3’s woofer pulsated with Gran Cassa, big bass drums, explosion.

*This model PADA-300B is an ideal unit for those who want to be completely satisfied with the 300B’s freshness and transparency, without even one spot of smear, yet having wide frequency range with excellent transient response and SNR. *