Old wardrobe I was going to take to the tip, three record cubes from habitat I was kindly given years ago and so no nails I found in the garage.

Not a bad days work methinks

Old wardrobe I was going to take to the tip, three record cubes from habitat I was kindly given years ago and so no nails I found in the garage.

Not a bad days work methinks

Are those a pair of JBLs Darren? Looks like a pretty slick setup.

Yes, k2 s , very happy with these and can’t see me changing, the pass labs are new so still evaluating if they are enough better than my krell ksa100 to make the switch permanent

Pop in for a listen Bob, not bad but I fancy a pair of 211s again so may well be up for sale at some point 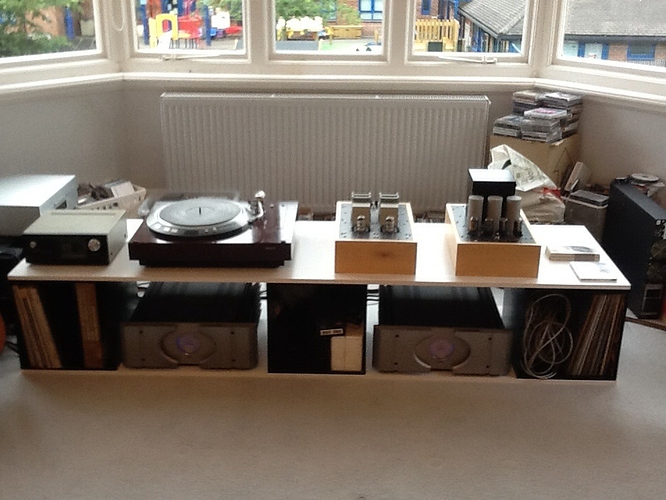 Better photo, but not much

Which Pass amps are they Darren?
The Krell was very impressive when I had popped round.
is that the phonostage? Now that was great

Looks nice, what are the pre amps?

X60 monos I think? Can’t recall the model number correctly but got them on pink fish from Carl a while back but only recently plugged em in as been in oz a lot this year

Pre amp is Conrad Johnson but not in shot, what you might think are the pre amps is actually my phono stage and its power supply (slightly over the top but it does a nice job on records, just need a nice sut to go with it

Is it a Thomas Mayer phono?

Yep, I didn’t see the CJ pre in the photo, but I assumed you’d not got rid of it as you liked it a lot.
I think it was somebody else who thought your phonostage was a pre. I still remember you telling me of the long trek you went on to pick those up.
You keeping well? You must pop in sometime, if for nothing other than my coffee - still have the same machine.

Yes, I’m pretty sure that’s what they are, and they did sound brilliant.

I can only imagine how it sounds but they do look great.

Yes it’s his ec8020 phono and power supply which I drove to Switzerland o fetch, it was worth it though as very nice

Have you moved rooms?

My question too Bob.