Classical Music for Every Day 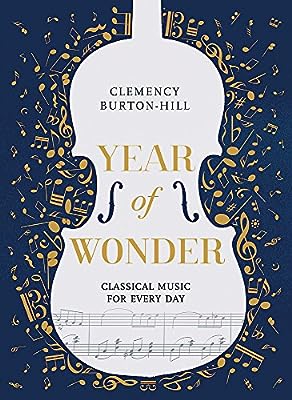 As featured in the Telegraph and on Radio 4's Today programme. 'Year of Wonder is an absolute treat - the most enlightening way to be guided through the year.' Eddie Redmayne Classical music for every ...

It’s rather good - it simply has a page per day, with a classical piece (mostly single movements) described. Most have a connection to the day itself - composer’s birthday, say - and it’s very diverse, covering all periods and composers I had never heard of.

For a commitment of ten minutes a day it’s well worthwhile.

looks well worth a read sometime

try his take on Consolation No.3

Got this from the wife, after dropping far too many hints.
@AmDismal how did you get on finding the pieces?
I have tidal but I think it’s not up to much for classical

it’s not up to much for classical

Tidal isn’t great for classical searching. The library is actually fairly large, and you can find most stuff just fine, but if you want a specific performance it’s sometimes tricky.

Any tricks you can pass on?

Not really, the tagging is so bad you can’t redeem it through clever searching. But you can usually find the piece you’re looking for, even if a specific performance might be elusive.

Yes very little berlin school of electronica such as gert emmens or ron boots etc. Got hundreds of albums in this genre and very little on tidal so i stick to spotify

No Gert Emmens on Qobuz either. I had thought that being European Qobuz might have done better, but no!