hi - could i please ask an experienced DIYer to see if the proposed connections are correct? I bought the PSU + rectifier board from DIYaudio + FW f5 parts. The transformer is a 500VA 2x18v (not centre tapped) but i presume i can create a ground point from the transformer by joining two wires. On the board, it’s not clear to me where the chassis ground and the earth cables from the transformer and the mains go?

Thank you very much 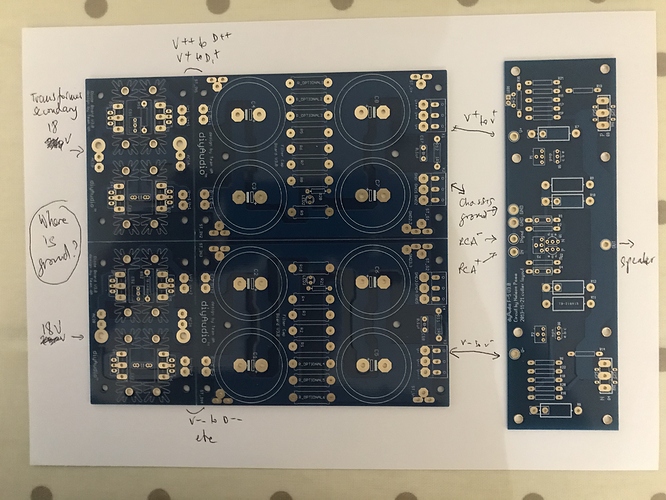 The school ma’am in me wonders whether it would be wise for you to be wiring up a 500VA mains transformer if you’re not familiar with this. It doesn’t happen all that often, but people (and more distressingly, though even less often) their loved ones can go dead if the earth wiring and overcurrent protection (fuses to you and me) isn’t done right.

However, for what it’s worth, there seem to be four diodes on each side of the power supply which indicate that it’s a bridge rectifier (most solid-state ones are) in which case it doesn’t need a ground from the transformer. 18V AC connects to two nodes of the bridge and full-wave rectified ‘DC’ comes out of the other two nodes (plus and minus). You then connect this to a reservoir capacitor (sometimes, not strictly correctly, called a smoothing capacitor). Since you have two power supply channels and two windings on the transformer you might choose to keep them separate, using one winding for one channel and the other for the other.

Actually looking more closely I see that the two power supply channels are positive and negative. The two output terminals of one are labelled V+ and GND. Those of the other are labelled V- and GND. We would traditionally join the two GNDs together, if that hasn’t already been done in the pcb copper. My comment about keeping the transformer windings separate still applies. The (now common) GND point becomes the power supply ground.

The build guides cover everything.

As per the guide. 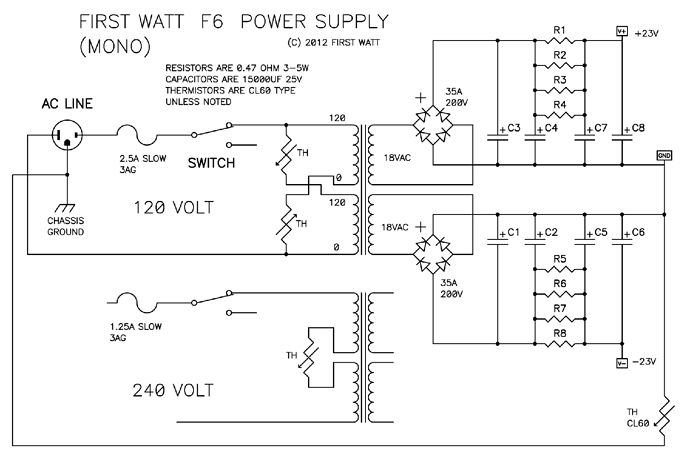 As per the guide.

OK, so the two GNDs do have to be joined together with bits of wire

It’s a “Universal” pcb that you snap the various parts off, like you can remove the rectifier part and use the block ones. So there is a bit of joining to be done.

hi - thank you for your help. i can follow the diyaudio guide but i want to make sure that the connection from the transformer to the board and all the other parts are correct. I presume my drawing is correct? With regards to the safety issue, i’ll get a qualified person to check it over first but i can solder so i’ll do all the easy work and get a pro to check it over.

Makes sense. In high current circuitry it can be wise to run psu grounds very carefully and using more copper than is sometimes available on the pcb itself.

As it happens I’ve just re-routed some signal ground wiring in a valve amp to drop the 50Hz and 150Hz noise pickup in one channel by 15dB.

Really if you can’t suss it out from the schematic you shouldn’t be doing it.

One AC secondary pair of wires should be connected to AC1A and AC1B and the other To AC2A and AC2B. Which isn’t especially clear in your diagram. There is no ground.

Thank you. I normally just joins all the grounds to the chassis at a single point and ask the pro to do a proper PAT test before switching the amp on. i wouldn’t have started this project but i don’t think it is particularly difficult? i thought the F5 have been built by many people so the PSU board is very familiar to many and it’s straightforward to verify my connections. Thank you for your advice.

Thank you. I normally just joins all the grounds to the chassis at a single point and ask the pro to do a proper PAT test before switching the amp on.

That ought to work. But @edd9000’s circuit diagram shows it done differently, with the power supply ground floated above chassis ground by that CL60 thermistor down in the bottom right-hand corner. I should read the build guide I guess, but if that’s the only connection between signal ground and safety earth then it might be a bit interesting if your PAT tester should touch his earth continuity probe on a high current setting to, say, any phono socket grounds. Still, at least it would be fail-safe.

The ground at the output of the power supply becomes the audio/signal ground. Pass uses a CL60 to float it, given that should something bad happen it drops to 0 resistance. I think even some of his commercial designs used to work this way, or he uses a rectifier.

i wouldn’t have started this project but i don’t think it is particularly difficult? i thought the F5 have been built by many people so the PSU board is very familiar to many and it’s straightforward to verify my connections.

You shouldn’t need the connections verifying.

I have built an F5 and a few other Pass designs, never used the DIY audio board though.

Its not difficult but its prone to eating itself as its a push pull design that needs carefully biasing on first start up.

Be methodical, follow the guides, check twice, and it will give many years of service.

it drops to 0 resistance

Low enough to blow a 13A fuse (because some fool will sooner or later put one in the plug) before the thermistor blows or the person holding the phono socket in one hand and the grounded plug in the other develops cardiac arrhythmia ? It takes about 60A to blow a 13A fuse inside a second and about 100A if you want it to go in 100ms.

My advice in all these things is that if you don’t know, don’t do it !

My advice in all these things is that if you don’t know , get the wife to plug it in

Its not exactly required, I just assumed it was just a ground loop/noise avoidance thing.

Also not fully clear on how what you are proposing could happen, what the transformer shorts and passes 240v through the psu board into the psu ground so the rca ground is charged? All of this is assumed to happen when someone used the wrong fuse as well?

Wouldn’t all this trigger the RCD?