you could ask whether PAT testing is appropriate for hi-fi gear at all. It was designed to test PORTABLE equipment and at the start they fairly clearly had in mind power tools, maybe hand-held kitchen appliances, powered cleaning equipment etc. They didn’t have in mind fixed installations.

Anything with a plug is counted as portable. The only things exempt are in fixed installations i.e directly wired through a fused spur.
So if your washing machine fails the PAT test change the socket for a fused spur and you are fine

Anything with a plug is counted as portable.

See p4 of this HSE document.

So is your hi-fi more like a radio or a PC projector (they’re portable) or a fax machine or desktop computer (they’re movable) ? It’s a matter of judgement. These days in the workplace (which is HSE’s only concern) we’ve taken to applying the portable tests to movable items too. Part of the problem is that outside the workplace there is no directly relevant legislation. In a home environment there is no requirement to test anything at all. If you’re manufacturing and/or selling something then the relevant legislation is not the PAT Testing stuff. It’s the Electrical Equipment Safety Regulations - 2016 which, when you get down to the details of the harmonised standards, are spectacularly more detailed and prescriptive. Understandably few amateurs have time even to find a copy of those, let alone read them. But they might know someone who does PAT testing. So they organise that instead. I suppose it’s better than nothing.

Incidentally, if you Google PAT Testing to find out what you need to do almost all of the links you get will be either to commercial PAT Testers or to organisations which represent them or to people who flog PAT Testing gear and courses. Unsurprisingly these folks will tell you that you ‘need’ to get everything tested, and very frequently. You should get your boots PAT tested. And all the plants in your garden. Because ‘that’s the rule’. They don’t point out that ‘that’s the rule they think everyone should adopt’. More seriously, many organisations do adopt internal rules about this. The place I used to work had equipment testing rules. But we never pretended they were the law. They were just rules we applied internally.

Unsurprisingly these folks will tell you that you ‘need’ to get everything tested,

Yep, everything with a plug!
Double insulated with no earth wire causes a few head scratches as well.

but what happens if the fuse and the cl60 blow and then you replace the fuse? there would be no earth. No one would think to open the box up and check the cl60.

? There would be no connection from the audio ground to earth. The chassis is still earthed.

Chances are anything that will blow the cl60 will also melt the amp as well.

I think it would be quite unlikely that they’d both blow TBH. But when just one of them does you really want it to be the fuse.

really want it to be the fuse.

And hope the mains-live-to-whatever fault comes after it

. And that when it blows the customer doesn’t replace it with whatever he happens to have handy.

What customer? Lets hope he doesn’t take in the bath too.

I’ve fitted enough of these, and I guess I will in the future, that I’d be interested in boards (maybe 20 or so ?) if you do get some made Pete. As an aside, when I clicked on the bridge link the RS site was temporarily down. The opening of the explanation to the Belgians caught my eye 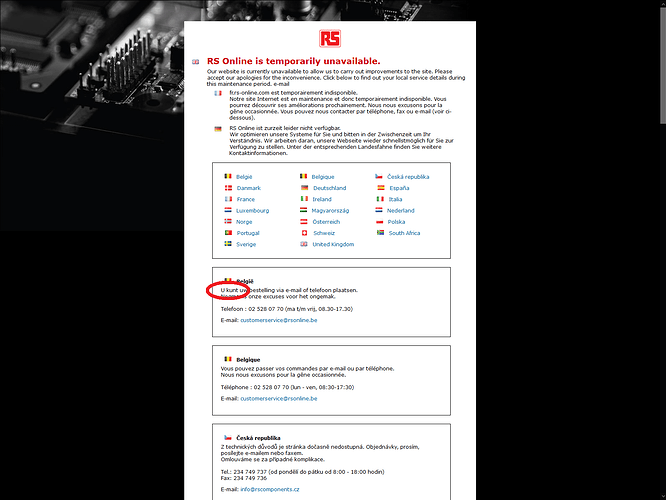 Yeah, RS seems to be up and down today.

I’ll order a bunch as I need some and Edd has said he’d like some.

Have a look at the PCB and let me know if you’d like any tweaks. I’ve done a few tweaks anyway, I’ll post the updated version later.

I’m sure it’ll be fine Pete. Usually the problem is finding something to fasten the bridge to if I don’t want to drill any more holes in the kit’s chassis. I often use the mounting hole in the bridge. But if I still wanted to do that I could bend the bridge’s legs to get the pcb out of the way. Apart from that the only other thing which matters is to have sufficient width of copper tracks to support a high transient fault current. I’m sure they are.

In terms of copper width, it’s a two layer board and I’ve created planes for 0V on one side and GND on the other so basically the whole area each side is the conductor.

I was thinking I might put the bridge at the edge so that you can bend it flat off the side to mount it. Let me have a think. 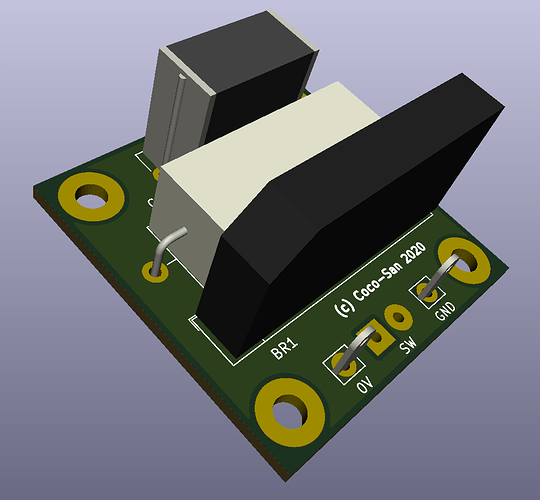 Hoping you can find a way to bulk it out to about 15Kg so people believe it’s a genuine Coco item. I’d take 5-10 if there’s any spare.

Hoping you can find a way to bulk it out to about 15Kg so people believe it’s a genuine Coco item. I’d take 5-10 if there’s any spare.

You could probably graft on some duelund caps and resistors.

Of course. It would cost 5000 times more and be 5000 times the size. The audiophile version

The satisfaction of knowing you really couldn’t have spent any more.