Diy replacing the horrible brass light switches the previous owner must have spent a fortune on with cheapo plastic ones we prefer (mk from screw fix) and hit a head scratcher I wonder if anyone can help with please.

Anyone know what switch type I need to replace it, it’s not 1 gang two way as the 4th hole on the mk ones doesn’t have any brass in it 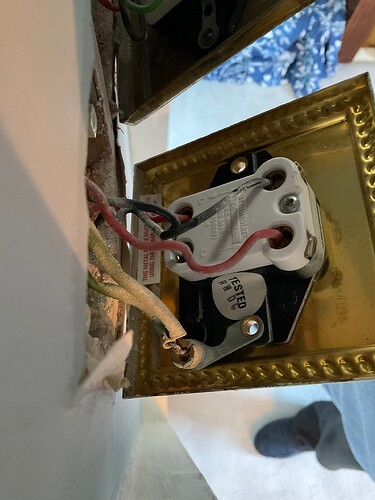 Whilst I am on, should I put the earth to the case or chocolate block it as not needed for the plastic replacements (or just cut it off?)

Not wanting to piss on your bonfire Darren but if you don’t already know the answers to those questions then don’t you think you should consider getting an electrician to do it?

Was going to say the same.

I don’t fuck with blue sparky stuff and know fuck all but If you have 3 way MK switches are you sure you haven’t bought spur ones and have ring wired lights?

Is it two switches - controlling the two sets of lights independently ? If it is then it’s 2-gang single-throw.

The earth wire should be screwed to the case. That way the screws which hold the switch in place are protected from going live in the event of a fault. The screw heads are regarded as ‘accessible’.

Fair point guys but most of it is 1-1 replacement, I have an electrician who I will get to check my work

It’s one switch that controls two floors on the stair, so my understanding of gangs is it’s one gang (one switch on the front)

I did earth the cases so thanks for confirming VB, live screw heads wouldn’t be ideal

I’m wondering if it’s two separate switches but operated by one rocker on the front. That would make sense if the lights were on two separate circuits (in our house we have an ‘Upstairs Lights’ and a ‘Downstairs Lights’ circuit at the consumer unit). In that case you wouldn’t want to common them in a single switch.

But I’m just speculating - you’d need a meter to check the switch.

Why piss about with stuff like this on Christmas eve when you dont know what you’re doing?

Leave it, have a beer and get a spark round in the new year.

Its an intermediate switch, its even written on it ffs.

Suggest you leave well alone as others have said.

painting now so no time for Christmas yet, will ask my sparky what he recommends in the new year, might be just that I can’t find an mk intermediate switch back plate photo on the web to see if it’s right but not sure so best not to dabble

Thanks for the advice fellas

Are you saying you are not sure if it is an intermediate switch?

Nope, I’m wasnt sure if the mk version will look the same as I couldn’t find a picture online.

Too late to worry about it now, it’s nearly Xmas you know

however It does look right though as just found this

Hopefully your electrician advises you pay him.

I prefer the brass ones.

can post em to you if you like them , nice patina for circa 1990’s cheap pressed brass

In all seriousness, if they’re headed for the bin, stick 'em in a box and I’ll have them off you next time we’re both at the same bakeoff, as they’re the same pattern as most of this place, and suit it fine