If you would like to move onto a fixed gas tariff there is a 12 month fixed option available at:

Based on what’s going on and the moment what’s the consensus, do you think it’s worth fixing it for 12 months?

Russia has just turned the gas tap off to poland and Belarus. Whats going to happen in the next 12 months is anyone’s guess.

When is the next price cap review?

Dom, are you on Octopus for gas?

I believe they have a Tracker tariff for gas with very similar rates to that fixed rate, but the upper rate is capped. I know it’s unlikely rates will come down but might be a better than a straight 12m fix.

Based on what’s going on and the moment what’s the consensus, do you think it’s worth fixing it for 12 months?

For me it worked out around £700 per year cheaper to stay on the standard tariff than go with a 12 month fixed one.

This is current prices for the flexible ofgem regulated plans

When is the next price cap review?

October (I think it’s every 6 months)

As soon as the grant scheme opens (on May 23rd) we will be getting an 8.5kW one of these put in.
https://les.mitsubishielectric.co.uk/products/residential-heating/domestic/outdoor/ecodan-r32-ultra-quiet-puz-monobloc-air-source-heat-pump

Yep Octopus, just checked and I have the cap too. Said they would message if the rate changes and give the option of joining the fixed at that time. 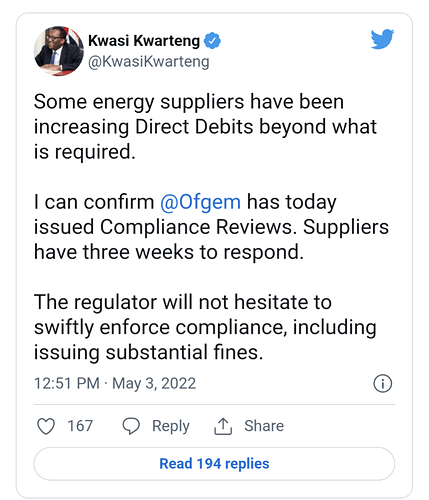 After what seems like a lifetime of battles with SSE/OVO (scroll up), we are successfully on Octopus Go. 7.5 kWh between 0030 and 0430 for car charging. This is plenty for daily needs.
Overall cost is doable.
Customer service is another level good.
£50 should be incoming Mark @browellm . Cheers

Do you have to change your radiators ? I read somewhere you generally need bigger rads.

Our radiators were specced for the house as was given the heat losses, since then we have improved the loft insulation and actually put in competently installed windows. The bloke that did the quote and also put our Sunamp in reckoned that we would be fine running the existing rads at 45 degrees.

We have a LayZSpa inflatable tub.

The last couple of years we’ve put it on during the day, allowed the 3/4 ton of water within to get to 34 degrees C which is the temp we like, used it in the afternoon & or evening then turned it off. The insulation afforded by its inflated sides & inflatable cover means the temperature drops back to maybe 23-24 degrees by the next day & we can then put it on again to get back to 34 degrees.

LayZSpa themselves reckon it’s more efficient to leave the thermostatically controlled heater on & maintain the temp at 34 degrees all the time.

I’m trying to work out which might be more efficient.

The water loses its heat via such insulation there is perhaps hastened (I guess) by a lower ambient temperature if there happens to be a cooler night.

Is either approach going to be better? At first I was thinking the heating blast then switch off would be better but now I’m not so sure. Would there be any difference at all given that the rate of heat loss would be constant & the heater, when it’s working, would be using fairly constant power.

Ideally it wants its own solar array to power it & probably some panels to cycle the water through to gather heat but that isn’t where we are at the moment. Any thoughts, besides don’t use it!

Hmm, I would have thought you’d be better doing what you were doing, Guy.

If the energy needed to raise the water by 1C is constant, then the only other factor is the temperature gradient between the pool water and the surrounding air. If the gradient is higher, won’t it lose heat faster?

I’m sure Graeme will put us straight shortly.

If the energy needed to raise the water by 1C is constant, then the only other factor is the temperature gradient between the pool water and the surrounding air. If the gradient is higher, won’t it lose heat faster?

The only reason for leaving it running continuously would be if there is some downside associated with either the temperature cycling (e.g. repeated thermal expansion and contraction causes fatigue failure of something) or the power switching to the heater (e.g. whatever’s controlling the power burns out through being switched off and on too often). I’d be very surprised if there was.

750kg of water has a heat capacity of a little over 3MJ per degree or just under 900 watt hours per degree. For the sake of round numbers add in a bit for keeping the tub itself warm and make that 1 kWh/deg. If your tub temp drops 10 degrees overnight, or a bit less than a degree per hour, then you’ll need to run the heater at about 1kW to maintain the temperature continuously. That feels like it would be worth saving if you could. So if it were mine I’d switch it off when I wasn’t using it.

Where is it losing its heat? Could it be worth looking at the base and checking the insulation there? It may be that plonking it onto the ground or concrete is really bad, and a thin layer of a decent insulator could reduce heat loss considerably.

There’s a base made of wooden pallets covered with a layer of ply then a sheet of vinyl flooring. The thermostat seems to work quite well in as much as once it’s up to temperature you can see when the heater is on and when it isn’t and most of the time it ‘appears’ it isn’t. I’ll try again the power off method and record how much the temp does drop off between 8pm and mid-day the next day and then see exactly how long it takes to get back up to 34C.

Simply keep filling it with hot water from the tap, thus alleviating the need to use the expensive inbuilt heater element.

The other thing that occurs to me is shelter. In my house I can tell if the kitchen window was closed or on the latch all night by the softness of the butter! If there’s any wind, I reckon you’d lose loads more heat.

What about constructing a removable windproof shelter that you could remove when in use?