The bungalow we’re moving into on Monday has an air source heat pump supplying the underfloor heating and hot water.

The house we’re moving out of, despite having gas central heating, is superbly well insulated and has proved to be very efficient over the last three years resulting in pleasingly low energy bills.

It will be interesting to see how the two compare.

The bungalow we’re moving into on Monday has an air source heat pump supplying the underfloor heating and hot water.

So we need to spend your money on other eco tech then.

Has it got solar?

No, not yet, but I want to get them installed soon as. With it being single storey, it has a big roof, so plenty of scope.

If the hot water system has a storage tank, get a Myenergi Eddi with the solar. If not, get a Sunamp and an Eddi.

Not familiar with any of those things - I shall investigate

When I spoke to SSE last week they said that it’s impossible for them to tell how much of the electricity generated is used so they just pay 50% that is generated at the 15p and the other 50% at 5p. Does this sound right please?

I don’t think the inverter will allow the addition of a battery.

There is a hot water storage tank and I’ll investigate mienergy eddi.

Does this sound right please?

Yep, unless you have an export meter you get a deemed 50% export.

I don’t think the inverter will allow the addition of a battery.

You do get AC connected batteries with their own inverter (like the Powerwall) as well as ones which run off the DC from the panels.

Yep, unless you have an export meter you get a deemed 50% export.

For reference, 50% usage is quite optimistic unless you have a battery/other diversion such as a car charger or water heating. Even with a bit of car charging our usage in 2019 was 34% on a 5kWp setup compared to 79% so far this year with the battery and Sunamp.

So far it’s all win - the bungo is toasty and the hot water comes through very quickly - in the previous house, you had to run the tap for about 30 seconds before the hot water appeared. 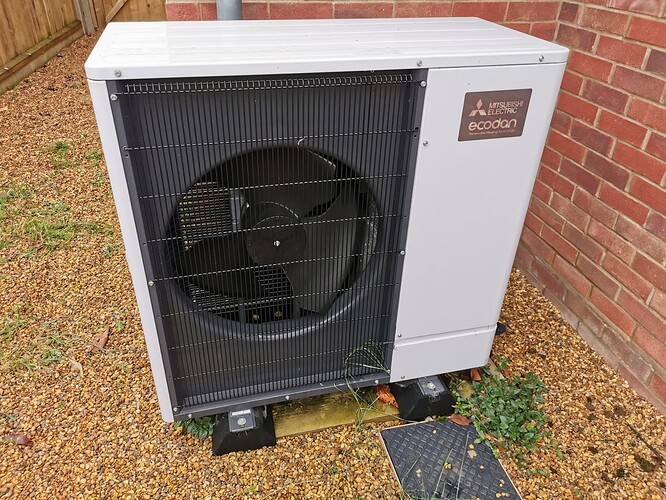 Is it using any electricity?

Have you got the MelCloud app set up?

I assume so, but how much remains to be seen.

No, what is that?

Don’t you have a smart meter?

Isn’t that one of those industrial units for removing extremely toxic gases in scientific labs?

We have an Ecodan R32, if you have the wireless controller you can do some control stuff via it. It is basically a commercial building website port.

No, they were with Eon, but I switched to Octopus. Octopus have agreed to install a smart meter ASAP

Octopus managed to connect to the Gen 1 smart meters from previous suppliers that were here when I moved in.
I was quite impressed as that has not always been possible.