Does such a thing exist?

I’ve been given a youview box and it needs to be connected to the Internet via an ethernet cable for its smart features to function.

I want to use it in a bedroom where there’s no ethernet socket, but an excellent WiFi signal.

If it doesn’t exist, are these any good:

For that kind of thing these guys are better IMO 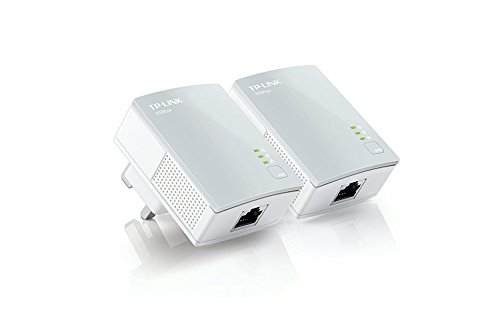 There are many different configurations regarding numbers of sockets, speed etc.

The only socket that is near the router is a double socket that my hifi is plugged into, don’t those things cause audible interference with hifi kit, or is that a load of bollocks?

You’d have to ask Russ Andrews for a definitive answer on that one.

I use one of those in my back room Rob as the wifi signal was poor and it’s very good on that score; haven’t used the Ethernet connection so doesn’t help you much

The only socket that is near the router is a double socket that my hifi is plugged into, don’t those things cause audible interference with hifi kit, or is that a load of bollocks?

I have no problem with using them at home. I have a bunch of them in the same room as my main system and don’t notice any issues with noise.

I’ve got loads of home plug things, mine are the Devolo 500 ones and I get 300mb throughput to all of them. I really like them.

If you’re precious about any HF crud getting through to your HiFi then you could get a mains filter, but I don’t bother.

I use a pair of TP-Link 1200Mps powerline adapters and they are simple to use but a bit more expensive. They must be plugged directly into the mains socket on the wall and not into an extension or multi way plug. The mains is pass through so you don’t loose a mains socket.

Mine definitely introduce noise onto the mains. It is nothing subtle but sever RF pops and grumbling noises that only show when playing through the TT. Waving my hand over the arm changes the frequency so it seems the arm is acting as an aerial. My local dealer has had the same problem with various combinations of decks, arms and phono stages and has tried various fixes which don’t work in my case. So I just turn them off when I want to listen to records.

Rob I have some TP Link ones somewhere. If I can find them you can have them.

Yours (or anyone else’s) if you want them, but if you get a better offer, take it

Found them Rob. They are these

Pm me you details if you want them and I will post them out tomorrow.

Big thanks to Nick @Myrman for the TP Links, so far, at least, they don’t seem to be adversely affecting the hifi, although that might be due to my mains filter box. Whatever, they work great and Ellie has Netflix in her bedroom now, so I won’t have to fight her to use my room when she wants to watch Once Upon A Time or Teenwolf etc etc etc (which, of course, is all the fucking time…

Back to the original topic.

Can anyone recommend a WiFi to ethernet (wired) adaptor?

Specifically not ethernet over copper - I can’t afford to lose a socket by the router, and I finally threw out the old adaptors I had since I’m pretty certain that they were the root cause of some network problems I’d been having.

So, something that I can plug in at the target end, it hooks into my WiFi somehow (how would I select a network and enter a password?), and it provides a wired connection.

At this rate I’d be better getting an engineer in to do me a decent router, probably a switch and drop a cable / some cables into the living room somehow

How good is your wifi? lots of wifi extenders have ethernet ports but if your wifi signal is shoddy or lots of people using it you’ll have problems as it’s still trying to share wanky radio channels.

The WiFi is good. It’s about 10 ft between router and target, through a wooden floor. Maximum 2 people using it lightly.

Quite a few wi-fi access points and routers can also work in reverse, connecting via wi-fi and providing Ethernet ports. You may have one in a cupboard