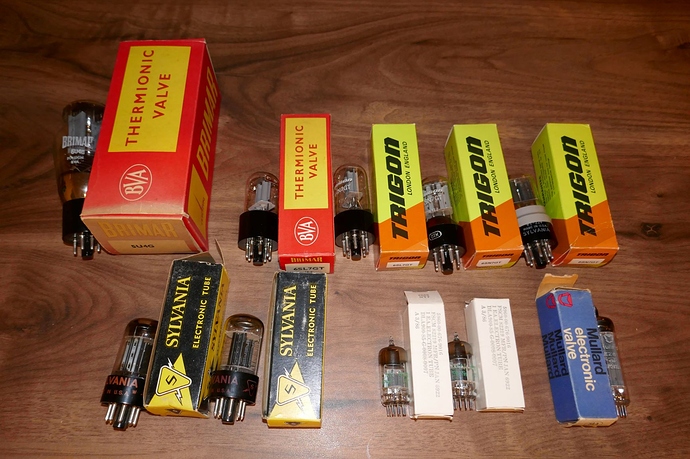 I bought all the valves as NOS but I can only give a best guess on the hours used I’m afraid.

If you need any more detailed photos let me know.

Again there is no marking on this one but I had put it a Trigon box labelled as a 6SN7GT so I’m assuming that is what the valve is but again can’t be 100% sure.

It says Sylvania VT-229 on the base. Assuming it hasn’t been re-based I’d guess that’s what’s inside the glass envelope. VT-229 is the military coding (Valve Transmitting) for a 6SL7GT http://www.r-type.org/exhib/aaq0432.htm.

Looking at your three Trigon boxes I see two are labelled 6SN7GT and one 6SL7GT. The latter box has a 6SN7GT alongside it, suggesting a mix-up at some point. I’d venture that the Sylvania valve belongs in the 6SL7GT box.

I can see the shadow on the table-top of some lettering on this. A closer look at the lettering might reveal something about the manufacturer.

Actually, on all of them. People will ask.

Saved from myself. I’ll spend it on orange watches instead…

Thanks for the info Graeme will get a better photo of the possible Brimar shortly.

Thanks Paul I’ll update the info regarding usage on each. 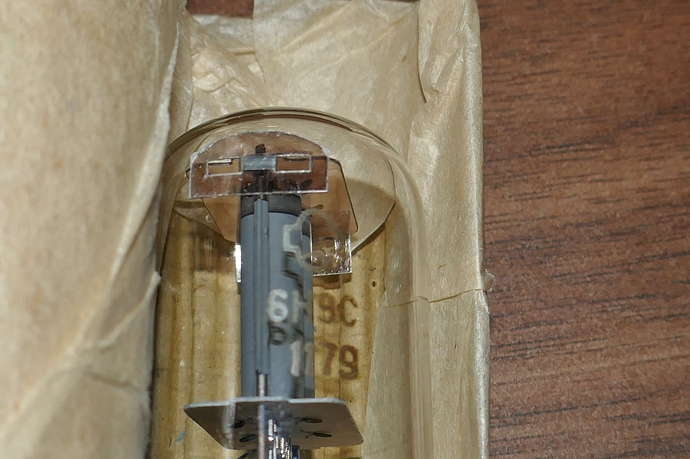 Actually that makes sense Chris as it’s a 6SL7 I use in my amp.

I’ve never actually used the valve, I bought it as a spare, so never noticed there wasn’t any branding on it.

Every day is a learning day on here - thanks Graeme.

Usually spelt Reflektor, although since it’s a transcription from the Cyrillic I guess it’s ambiguous.

I like the reflektor valves, the 70’s being the best ones.

Trigon these days is a brand name owned by Edicron. They sell the Reflektor valves branded/printed with Trigon on them… Nothing wrong with that, they’re good valves. £10 each used might be a bit much for those particular items. When I have them they’re typically £7.50 rrp

Trigon these days is a brand name owned by Edicron. They sell the Reflektor valves branded/printed with Trigon on them…

The OTK mark on the base of one of them confirms they’re definitely Russian.