Going out on a limb here, and declaring a new build

I have been considering buying a used six channel amp, to take the JBLs active, using a PC plus soundcard as source. However, after a little thought I decided that I should build my first valve amp.

This will be a four channel amp, designed to run mids and tweeters. The drivers are compression drivers, well over 100dB/W, so power is irrelevant.

After some discussion with Pete, obviously (and he’s designing the circuit), the plan is a single tube per channel, but a tube like a 6EM7 or 6DN7. These are dissimilar double triodes: you can use one part to drive the other. They’re not expensive and seem fairly available. Should get at least a couple of watts.

The power supply will probably been tube/choke, with an additional choke for each channel. Coupling will be either transformer or DC. The output transformers won’t be that big, as bandwidth is not a problem - these will be used above 500Hz at least, and even the cheaper output trannies nudge below 100Hz. It’s single ended of course.

The plan from above will be roughly as follows: 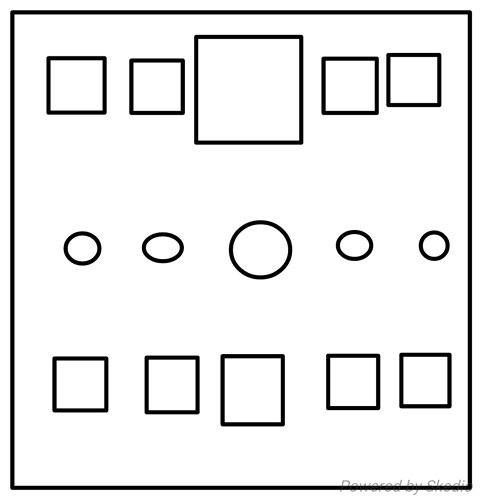 (Drawn on my tablet in one minute, fuck off with the comments please

Where you have from top centre going down mains transformer, rectifier, main choke, and then the four channels going up choke, tube and output trannie. Obviously there may be more large components such as capacitors and interstage trannies, but I’ll only know that when we have the circuit. Oh there will be volume controls on channel as well.

I’m currently planning to mount it all on a thick piece of aluminium, with a wooden base covering the ugly bits underneath. But that may change when it’s properly laid out. It’ll go on top of one of the speakers, and there’s plenty of room there, so it could easily be 60cm wide and 50cm deep.

Anyway early stages yet, but I’m planning to beat Rabski at least…

Anyway early stages yet, but I’m planning to beat Rabski at least…

Where’s the fun in that?

I currently can’t work out whether to
A - build a six channel amp, four tubes and two class A
B - buy a Rotel

B is cheaper and a fuck of a lot easier. A will sound better. How much difference will it make in an active setup?