I wonder who may have owned this. :)

The reg on the car in the vid, otoh 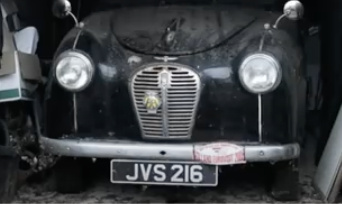 I didn’t know his middle name. So now I know that I have the same initials as that horrible fucker - thanks for that

Not quite. James Wilson Vincent Savile, it seems.

Out of interest, when did cranking handles cease to be a thing?

I can recall being in the church car park as a child (1960’s) and watching someone crank what was probably an oldish car. But I was also amused by various people in Peaky Blinders (set in 1930) jumping into cars & roaring off.

The Ford Model T relied on hand cranks until 1919; during the 1920s, electric starters became near-universal on most new cars, making it easier for women and elderly people to drive. It was still common for cars to be supplied with starter handles into the 1960s, and this continued much later for some makes (e.g. Citroën 2CV until end of production in 1990). In many cases, cranks were used for setting timing rather than starting the engine as growing displacements and compression ratios made this impractical. Communist bloc cars such as Ladas often still sported crank starting as late as the 1980s.

Not sure about dates, but I often used to crank-start my A30. It went through a period when it would fail to charge the battery (eventually tracked down to a mis-set charging regulator, which was supposed to disconnect the charging circuit from the battery at very high revs to stop overcharging). I’d find myself miles from home with a completely flat battery. The crank start would usually get it going though. I once had to jump out and use it when I’d stalled at traffic lights ! Heaven knows how much trouble a flat battery would cause on my current car.

Yes, I assume the need for crank starting at the church was due to a fault such as a flat battery rather than being a daily necessity.

Certainly used the handle on my 1960 Morris Minor a few times. They were in production until '71, I presume still with the crank available.

The talk of crank starting reminded me of this.

I had a 1971 ex army land rover, that had a starting handle. It was surprisingly easy to hand start.

Friend of ours has one of those

A bit late to this but I had a 1972 Range Rover and that had a crank handle.

I seem to remember there was a starting handle on my Citroen Dyane remember using one quite often but slightly vague memory on actually which car it was.