I have more blank cassettes than I am ever going to use in my lifetime.

If anyone is interested I’ll list them here at reasonable prices. I can’t let them go for nowt, but they’ll be priced at a level that you won’t have to think twice about using them to tape the hit parade from the wireless.

Hi Rob
I would have an interest in the chrome and metal tapes.
I don’t think I could afford them back in the day so it would be fun to try recording the top 20 on Sunday afternoon off the radio to metal tapes.

I’ll get to it then. It’s going to take me a few days, they’re stashed in all kinds of hidey holes to prevent me getting clouted by Claire for hoarding them…

If you couldn’t afford them in the day I doubt you can now.
The metal one especially, if decent brands like TDK, Sony, Maxell etc, go for serious money if new and sealed - just search ebay.

If you couldn’t afford them in the day I doubt you can now.

A lot of them are unsealed, but guaranteed unused.

None of them are mega expensive stuff like TDK MA-Rs or the Maxell metals, or anything that the collectors want to get their hands on, I bought them with the intention of using them (I used to do a few traveling tape projects) not stockpiling them as a pension. Some came out of studios and radio stations, obvs loads came off ebay.

All of them are decent performers though, especially if you have a deck that allows fine tuning of bias etc.

This kind of stuff. 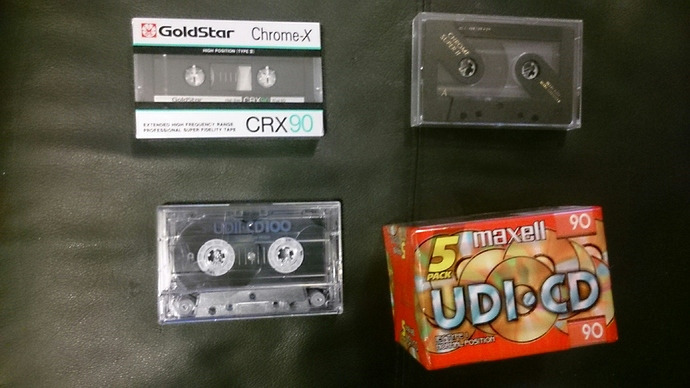 Jeez I just looked on ebay

I know, crazy isn’t it? Although you could argue that they’re never going to be made again and they’re a diminishing resource… 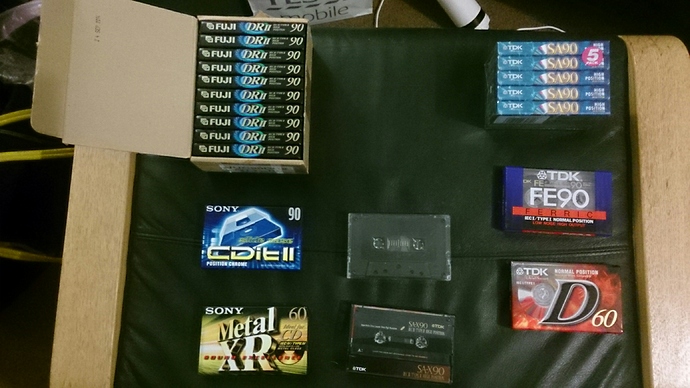 If someone wants to pay me £20 for it, I’ll chuck in the postage for free…

The black onen in the middle is a Tapeline metal, I think c60 and iirc Maxell tape stock. I’ve never got round to using them so would like to test one before I let them out into the wild to make sure they’re not shit.

Jeez I just looked on ebay

blimey - I’ve got about a dozen TDK MARs in the loft - all just recorded on once…We used to get given them for making demo tapes when I worked at Lasky.

They were great for selling addons to a cassette deck - a geezer buys a cassette deck, and you’d say didn’t that demo sound great - yes he says - I say you need some TDK MAR in your life, and since your going to be making loads of recordings with your fantastic new deck, you’ll need a box of ten. Buy the box of 10 with your deck and I’ll give you 10% off the tapes…what a great guy I am…It never failed!