Five years ago I brought a set of boards designed by Peter Daniels from a diyAudio member. I did my usual thing, stuck them in a draw and forgot about them. Every now and again I would rediscover them and think I must… but being a first class, top notch lazy bastard and Class A procrastinator I just never got a roundtuit. Anyhoo, for because reasons, last week I ordered the parts I didn’t have (miniature 1/4w resistors, 5w resistors and some semis), yesterday they arrived and this afternoon I populated the first pcb. 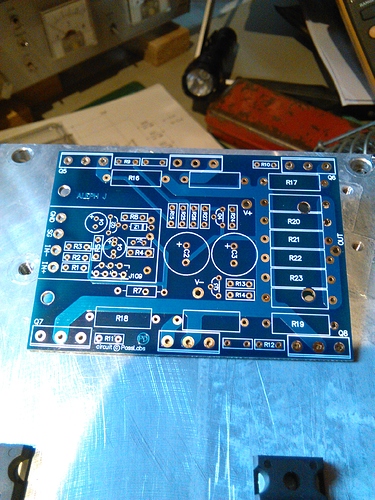 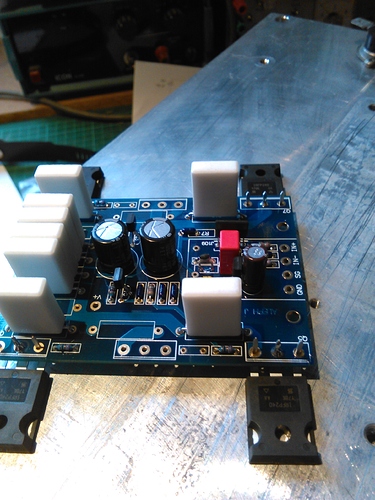 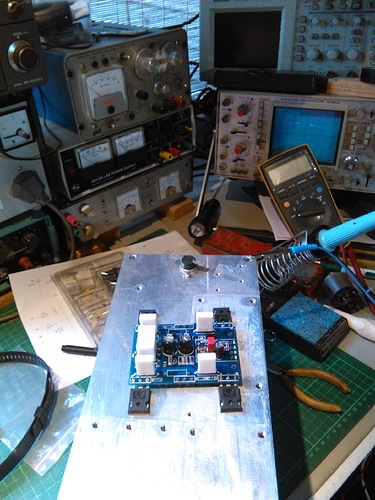 So, stop messing around at a computer and get on with it then

Thanks Mike. The next step will be to power the board up and see if the magic smoke escapes from anything.

Lookin’ good - of course, we will be expecting you to hold your first bakeoff on here, so we can pass judgement on the finished product

Nice, I’d like to try an Aleph J at some point. Built an F5 but prefer the Aleph 5/30/60. It would be interesting if the sound is somewhere between them. Also have the vfet kits, must get around to that too.

I was in the 3rd and final vfet kit group, of course I was on holiday when the email to confirm/pay came and I missed it so no kit!!

I was in the 3rd and final vfet kit group, of course I was on holiday when the email to confirm/pay came and I missed it so no kit!!

I missed the 2nd one because the email came at some annoying time. The 3rd one I was sat up at 12am to get them.

Good move, I think NP has plans for at least one new design using the vfets that are left over.

No idea what or when though.

What do you prefer about the Aleph?

What do you prefer about the Aleph?

Subjective nonsense alert:
The Aleph has fantastic bass, and a slightly sweet sound that I put down to the use of mosfets on the input. The F5 sounds incredibly detailed but as I think @Ijrussell described it not as dreamy, it didn’t have the same bass either.

I also like that the Aleph 30/60 requires no expensive jfets, all the parts are easy to source, it has no pots for settings, and is stable into a short.

If you are active, F5 on the tweeters, Alephs on the mids and bass

Interesting, I’ll have a think. If I can source the FETs well then I’ll probably go for F5s, but an Aleph on the bass could indeed be a plan… 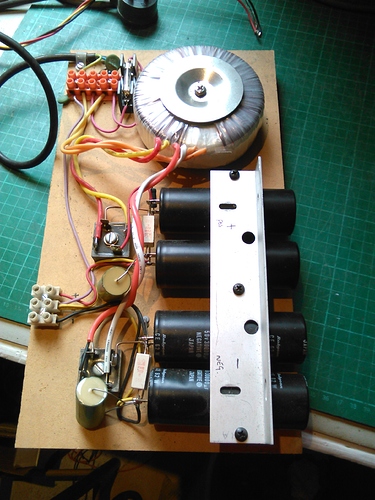 NP BA2 003.jpg1944×2592 828 KB
my pass projects power supply breadboard, I found this attached to it. It’s the output stage of a BA2,tested and debugged. I am very tempted to build a valve front end for this as it is a unity gain follower that only needs 10 volts for full output. The board is my own design and manufacture. The date on the board is 2/4/11!!! Lazy, procrastinating bastard I is. 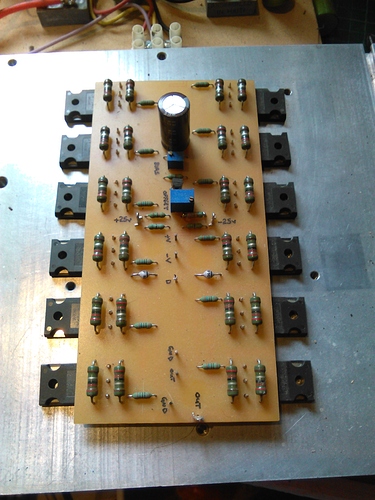 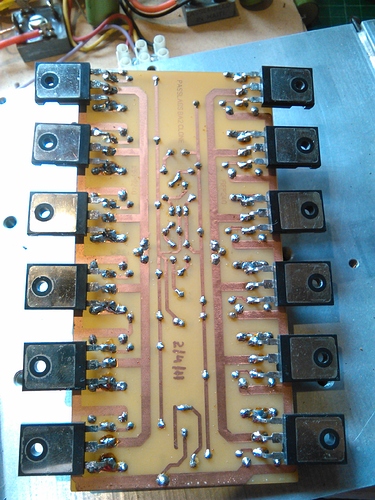 The board powered up without any drama. 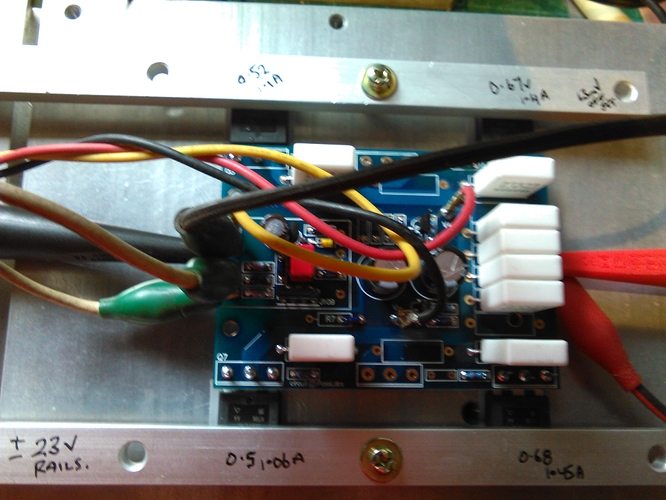 Oh shit! Asymmetric clipping on the negative half of the output sine wave starting at 6V into an 8 ohm dummy load. On the upside the square wave test was very good. Well, after a bit of head scratching and reading, it looked as though the over current protection circuit was being activated. Initially I tried to haul back the bias by trimming the bias set resistor value, unsuccessfully. I also tried swapping a couple of the fets around to better match the pairs. This made not a jot of difference. So, I removed the transistor from the protection circuit. Success! Loverly symmetrical clipping, 27 watts into 8 ohms at the onset of clipping. The clue to the cause of the problem is in the above photo. On the official schematic the protection current sensing is done at Q7 and shouldn’t have caused a problem at 0.5 volts across the source resistor. On these boards the sensing is done on Q8 which has nearly 0.7 volts across it’s resistor, enough to start the protection once the bias current started to get modulated by the input signal.I think my not matching anything has just bit me in the arse. For starters I’m going to match the source resistors and see what happens. Until the next rivetting post…

A fruitful day, much learnings learned. I replaced the source resistors with foo Mills MRA5, 0.5 ohm matched to 1 milliohm. These made quite a difference towards equalising the bias currents. They were still a little hot, but the spread was less. I managed to pull the bias back a little more by increasing the bias set resistor value. Spent some time making various measurements, had an afternoon nap and did some more reading of the J build thread on diyAudio. On the board they used they have a variable resistor to set the bias, so I thought why not? I bodged one onto the board and started twiddling. Well bugger me, if this is not a magic tweak control I don’t know what is. As well as setting the bias it can also appear to tweak the AC gain of the active current source. Anyway, by using a distortion analyser and a dual trace scope to monitor the distortion residual and clipping I was able to find a sweet spot where everything came together. As a result I can exactly duplicate the graphs in the official J manual. A better matched set of fets is the next step. 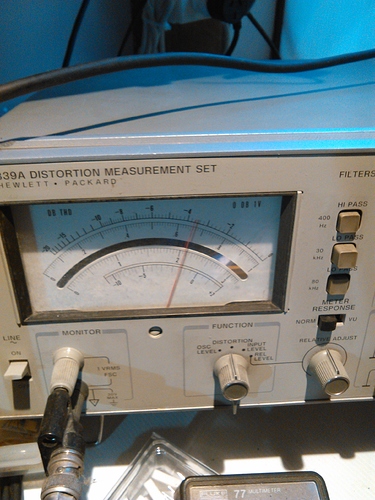 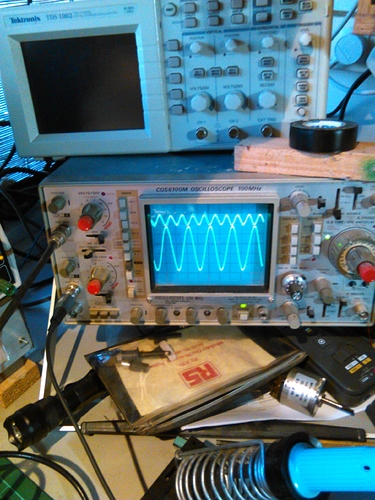 During the week I ordered some more IRFP240 fets, this time from Element 14. This afternoon I set up a jig to measure the gate-source voltage at 1 amp drain current to see if I could get at least two sets of matched quads. I was pleasantly surprised. 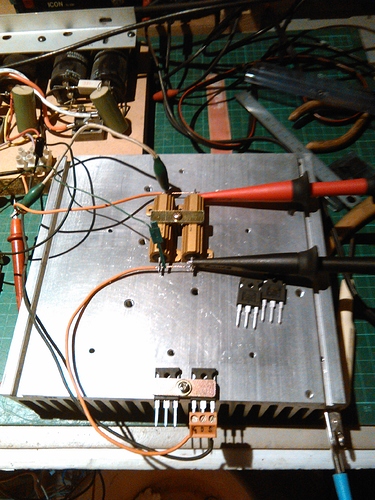 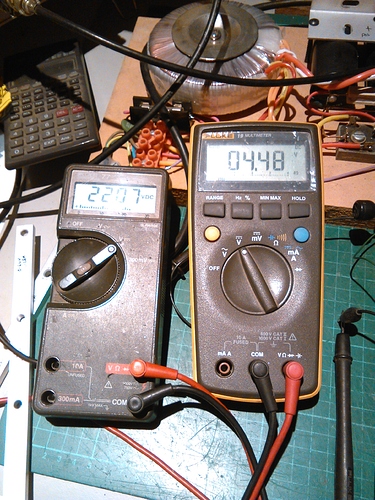 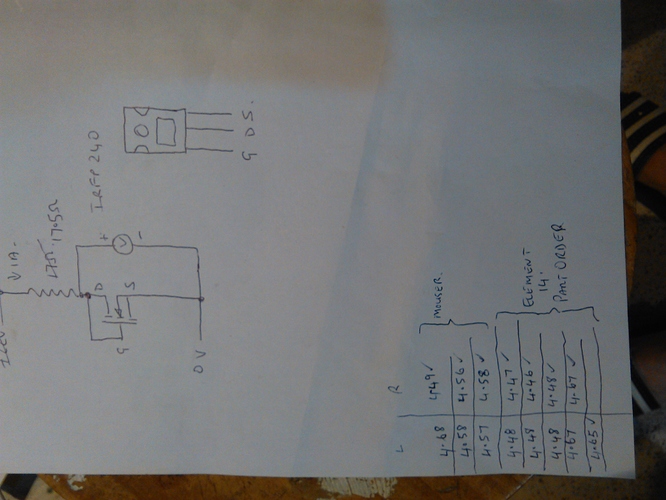 I get my mosfets from here:

I’m way to lazy to match my own.