Not trying to start another "Meh thread" but any help for new exhibitor at Scalford?

Just plonk the stuff in a room and play some music. And maybe get drunk. It will be fine.

She’s the fella who restored that rather tasty car a while back, no?

My only advice would be , if anyone called Marco gives you anything to drink don’t drink it.

She’s the fella who restored that rather tasty car a while back, no?

Reel it in guys or thread goes.

We had the speakers against the window side firing across the room, worked fine.

Wow, cant wait to get some tunes through them Simon. They look fantastic:love: 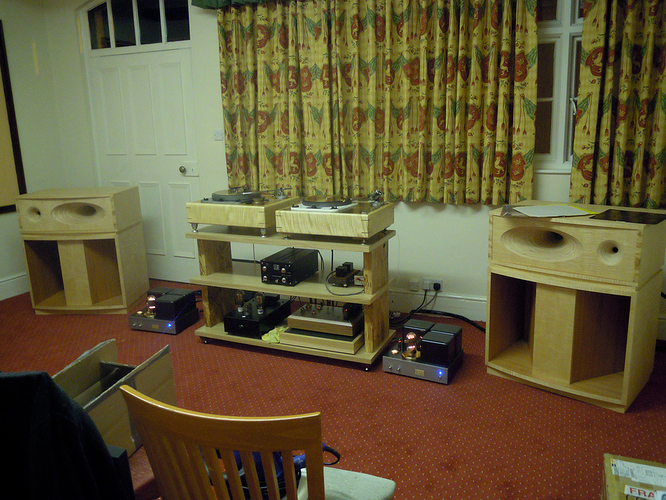 You are right Wayne, I was just trying to help a new exhibitor in an area where a lot of experience lies.

Still haunts me that I missed that system

Not surprised, weren’t you a tad busy playing with some second rate Jap valve amp that year

Don’t know how I missed it. Glad to see you have kept the speakers

Fecked if i know, no expensive muffins though, I remember that much.

Just plonk the stuff in a room and play some music. And maybe get drunk. It will be fine.

I hate to agree with bumtell, but he’s basically nailed it. Treat it as fun and enjoy it!

There is a relatively deep beam that runs across the room about a third of the way in from the opposite wall from where the speakers are shown in the above pic.
This has caused some bass issues in the past. Experiment with speaker positioning.
There is also a door that leads into the Butlers Pantry.
Make sure it is shut and is not used as a route from one side of the show to the other otherwise you will be exhibiting in a corridor.

Everybody agrees with me eventually.

Even a stopped clock is right twice a day.

Hifiwigwam is the voice of experienced audiophiles. Fact.

Right, stop now.
You made your point now grow up.

Any more and thread closes while you take a holiday.

If there is not a wall near Mexico involved, I am not interested!