Given that we have a number of musicians on here, I thought I’d try and garner thoughts on PA gear; what people use, what they like, what they don’t like etc.

I’m considering getting back into doing it, having done it voraciously in my early teens. I’m relatively out of the loop on current gear, other than what I’ve researched in the last few weeks.

I don’t know about makes of PA system but I can tell you a lot of gigging guitar players are now abandoning their traditional guitar amplifiers and speaker cabinets in favour of running into an amplifier modeller and then into a PA. So good PA systems are becoming more important to guitarists.

The modeller digitally recreates the sound of a guitar amplifier (like a valve head into a 4x12 cabinet) and outputs a signal suitable for a mixing desk or PA. It’s the convenience of not having to lug around heavy amps and cabs which is attractive to guitar players.

The market has fragmented, a lot depends on your target audience, as a bar set up is completely different to a concert hall. When I first started I used Danley, but these were totally unsuitable for the work I was doing. The prices for top end stuff makes hifi a cheap hobby, but the returns are there.

For wedding and voice reinforcement I do a lot with Bose L1’s, nothing to do with sound but low visual impact which appeals to that market sector.

For concerts in large venues, line arrays are now industry standard and generally out of the capability of one man bands (my last gig used 4 line array’s of 12 speakers and 24 subs, which takes a good team most of a day to rig).

Looking into the middle of the market, then active speakers with couple of subs is really the starting point with a X32 mixer and then upwards. For mass market stuff I like KS Audio and RCF, although I would try to reach the TT+ range on RCF stuff, along with subs from either. Mixers; digital or you are dead these days, lots to choose from, but the learning curve can be steep. The X32 as already mentioned is an industry standard at the lower level, going up through Allen & Heath and on towards DiGiCo if cost no object.

Microphones haven’t changed that much, SM58’s are still industry standard even if other are better (Sennheiser 845 for instance). What has really changed is lighting technology, turning up with a couple of par can’s and a effect light really is for the weekend warrior, I can spend a couple of days programing light changes and sequences to match a show.

The other area to get up to speed with fast is H& S and noise reg’s as these will shut you down before you start. This is how I fell into the industry as an environmental engineer dealing with all these issues.

Just for the sake of awareness, as it’s barely within the reach of mortals yet (6 systems currently in operation I think), the next level of p.a that I’m aware of as things stand, is arguably the new Vero system from Funktion One. Heard it at a Infrasound festival in Wisconsin, last summer. Just insanely good. Our engineer Ricardo who knows his onions (ex front of house engineer for Muse) was adamant it was the best system he’s ever heard. I have to agree. Just a massive hi-fi in a muddy field! Amazing.
The Phoenix in Exeter have just installed new Funktion One, whatever is the level down from the Vero, but still extremely fine. Can’t fault their systems.

Personally I’m always pretty fond of Martin Audio. Solid, clean, consistent. L-Acoustics put a new system in the Trinity in Bristol, which is absolutely superb. I’ll ask Ricardo for recommendations actually, cos we’ve been hearing a lot of excellent new stuff in the last year or so. There’s been a big step up in quality.

There are a number of companies (L Acoustics, Meyer, Martin and D&B to name a few) that are all doing excellent stuff but that are probably beyond my starting budget. I got a quote for a D&B T series mini line array (6 tops and 2 subs) and it was £28k including the amp.

The Function One mention is interesting as I was only aware of them doing stuff aimed at the clubbing end of the spectrum, so will need to take another look.

There are a number of companies (L Acoustics, Meyer, Martin and D&B to name a few) that are all doing excellent stuff but that are probably beyond my starting budget …

Maybe get Pete to build you one

This is another option and forms part of my core system, not as expensive as the top fight but still rider friendly:

Ethos Live Sound range of products from Logic Systems Pro Audio are tailored to the needs of the Audio Professionals working in the live sound market.

No-one has mentioned Opus. I’ve heard some Opus rigs that sound as good as Funktion One.

I always thought the Thunder Ridge system they had at The End was the best looking system ever. I’d love a pair in my room.

Can’t find much on Thunder Ridge; I suspect the company must have gone bust. Still wading through the other options mentioned here!

Opus seemed to disappear around seven years ago. Sounded fabulous at my wedding (10k stacks), using a mixture of TAD and Precision devices drive units and amplifiers which weighed more than you’d want to lift on your own. Many may still be found in various pubs and clubs in Plymouth, I believe they found a sub in the now derelict Dance Academy.

Most users have since moved on, D & D seemed favourite, although at that stage I went to work for Martin Audio so lost touch with that group.

That Ethos setup by Logic Systems is definitely looking pretty compelling, not least because the cost of entry isn’t quite as astronomical as a lot of brands. Need to see if I can work out a way to hear some when I’m back in the UK at the end of the month.

I suspect other than that my starting point will probably be a tiny console plus a decent graphic, as until I have built up kit it’s going to have to be a fair amount of wedding DJ level stuff to get the ball rolling (not helped by the fact that we live in the arse end of nowhere). After that, the Allen & Heath GLD-80 does look like the console to go for.

The GLD’s are nice, I did manage to drop one last week which scrapped it (was a 18ft fall though). I currently run three and saving for a fourth, don’t under estimate the X32’s though. We have six of those which are always in use and earning money, which is the mistake I made early on, it what your market wants, not what you want.

Give Logic a ring, they are very knowledgeable and willing to talk deals. Their back up I had is very good, although I don’t use their amps and have racks of MC2 amps instead with a logic controller.

The other oddball we use a lot is Bose 802’s, lots around second hand and hard to kill. So good for village hall type work were budgets are tight and the client would otherwise be looking at low end MI stuff. As long as you have a DSP amp you can get rid of the Bose equaliser as well.

Just back from our menswear show in Paris. The PA system was 8 of these positioned at points around the catwalk: 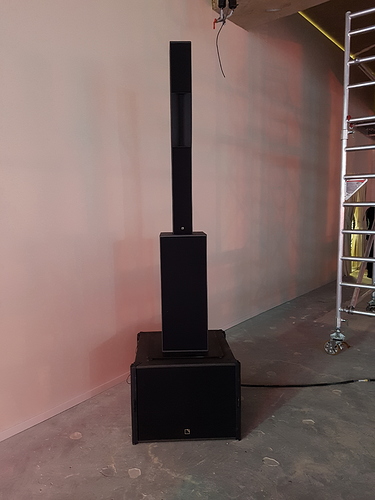 I didn’t get much of a close listen but the in short time I did they seemed very impressive.

I think it is a kind of line array, using multiple drivers, with the top end in a wave guide. The bottom box is a sub which goes deep. I would like to hear a stereo pair, the mids and top seemed nicely refined.

My band uses active Yamaha subs and tops, they are excellent and really easy to set up.
Worth checking out, there are different models ours are the better quality range the tops were about £1800 and the subs a were bit more I think.
It’s Good stuff.