Ok tell me, how hard is this to do, honestly? I have some in the garage that I’d like to fix, but I’m nervous of fucking them up irreparably. And sometimes I look at speakers for sale, needing refoaming, and wish I had the confidence to just grab them and get on with it. I’m thinking maybe it’s one of those things that once you get your head around it, you wonder why you didn’t learn to do it earlier?

Looks simple enough, though pretty sure I’d mess it up 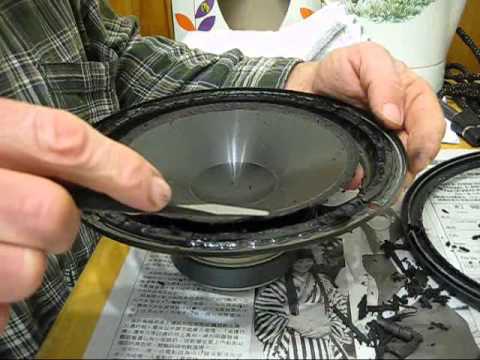 My Grandad was great with truisms. His reply would be, “If you don’t know how difficult something will be, it’s probably too difficult”.

He also used to tell people you could cure diarrhea with a spoonful of Gravox. Well, it didn’t cure it but it thickened it up

I was ready for the drive of shame to Wembley audio but they are fine.

Have you got a spare driver you could do as a trial? It always looked like one of those jobs that should be straightforward but could be very easy to mess up totally.

As long as you’re careful to remove all the old foam and glue, and use the right glue yourself (you want a slow curing one, I reckon), it’s hard to see how you could really fuck it up.

Send them to Wembley.

Or post some pictures of you glued to a voice coil.

Some drivers need the voice coil former to be shimmed in the gap, indeed some drivers will have taken to buzzing (voice coil rubbing in the gap) before the foam disintegrates altogether and would definitely need to be aligned/shimmed before the new surround is glued in place. I guess it depends to a degree how wide the gap is & what the clearance should be. Driver manufacturers have jigs to set these things accurately and repeatably in production.

I did some 8" B&O bass drivers last year - It was quite a bit easier than I thought it was going to be. The finished edge was excellent. My online research suggested using Anitas tacky PVA glue -This has a small controllable nozzle.

My son has been using the speakers -I think they were yours originally ?

Yes they were… evidence of how long I’ve been procrastinating around the subject!

I guess with older drivers then the voice coil could be out of alignment as well, for sure, but if they are working properly and it’s just perished foam, it’s an easy job. Fully reconditioning drivers would include checking they are within spec, that’s much more complicated.

it’s hard to see how you could really fuck it up.

That shows a lack of imagination

Just say you were doping the cones with some foo glue

I did some HB1s made a real mess, and ended up buying new drivers

When Ziggy and Marley destroyed the woofers of my AN/Es SpE HE Signatures, the badgers offered to refoam them…they cocked up and offered to replace the drivers for the price of a refoam