SOYS: State Of Your System

I’ve searched and can find no thread like this. One reason for it is to bookmark where your system is at, document changes, &c. The other reason is selfish - I have no fucking idea what anyone owns nowadays and I’d actually really like to know.

In attempting and failing at being dealerscum I inevitably and predictably lost all interest in hifi. The absolute last straw was a chimney crashing through the roof of my office damaging lots of equipment, and then a looooooooong subsequent series of disputes with insurers and builders - with everything trapped in unusable limbo. I never got a single penny to replace any of the £1000s-worth of equipment damaged or destroyed, but at least the house is largely whole now.

It’s been years since I last gave so much as a picofuck about hifi, and two years since I last listened to music in earnest, but I have recently cleared-up 99% of the chaos, and am deep into a reorganisation of what remains upstairs and in the music room.

So here’s the system, excuse the godawful pics - there’s more light at the bottom of the fucking ocean than here in rain-soaked Lincs, plus I can’t take a decent photo for shit: 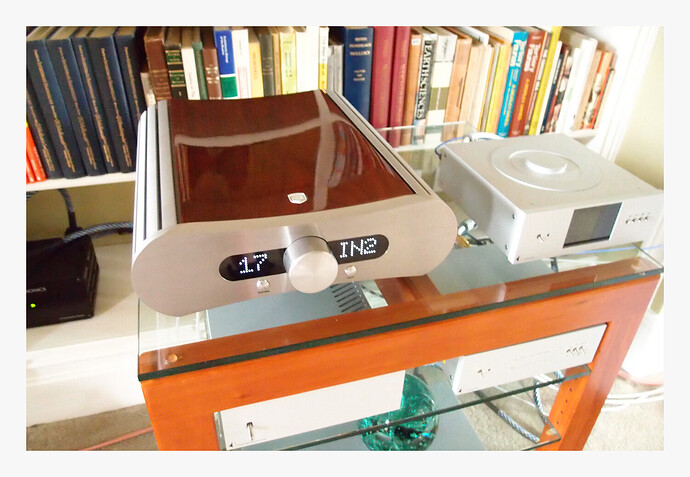 New arrival#2 - landed today, Arcam Diva DT91 DAB/FM tuner. Wanted to try one for years, and one sat unbid on ebay for a week at a bargain price due to no box and 'structions.
It displaces a TEAC TH380-DNT - which it absolutely destroys. I’ve owned a few hybrid tuners, including one with the same core Radioscape module, but this sounds significantly better than any of them. DAB obviously has its limitations, but this makes the very best of it.
Sure, a dedicated tuner is an oddity in the world of internet radio, streaming &c., but I prefer it greatly, I like the old-fashioned interfaces, and actually get a better result due to the appalling bandwidth availability out here, miles down the end of a length of wet string and in a house that appears to function as a faraday cage for all wireless internet… 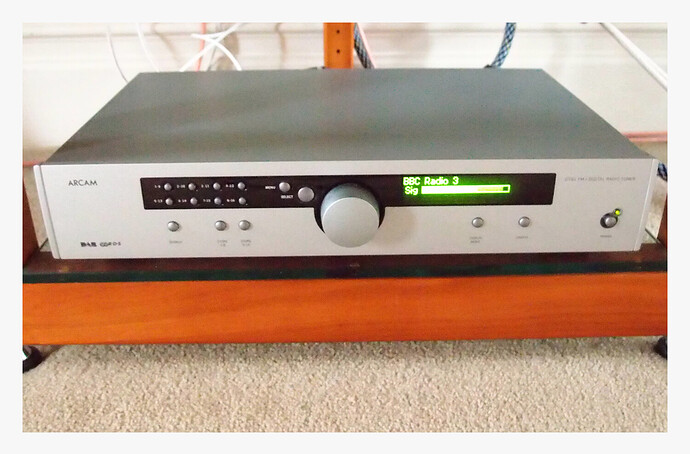 Another new arrival that’s been transformative beyond appearances is RGTech’s Monarch 50 antenna - despite having roof aerials on a 3-story building in a flat landscape, most of ‘our’ radio transmitters originate a county away in Leics or Cambs, so I thought I’d try some of the much-vaunted “modern technology” given it came with a sub-£20 price-tag and 30-day returns policy.
Rather to my surprise this apparently transparent piece of plastic (there’s a printed conductive grid on it) works substantially better than the roof-mounted aerials - I get close to 100% signal strength now 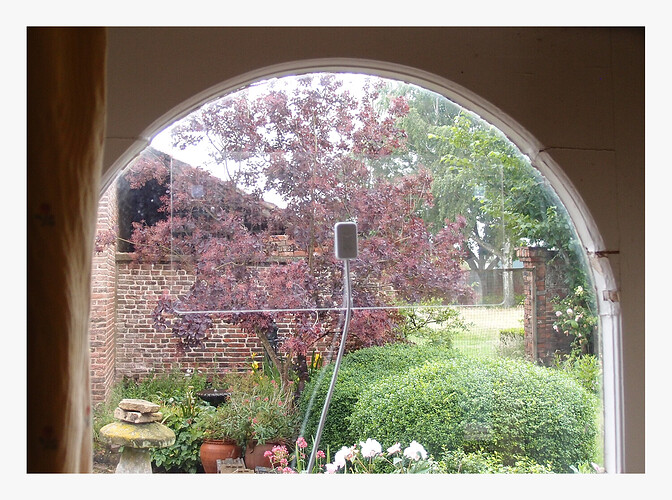 Unchanged in a good while: Lehmann Audio Silver Cube phonostage and Pro-ject Xtension 10 turntable with Ortofon Cadenza on Pro-ject’s (then) massively revised carbon-fibre arm (which I find to be excellent). A combo lacking in snob appeal which it makes-up for in good engineering and musical insight - this combo digs deep but never over-exposes recordings, even bad ones: 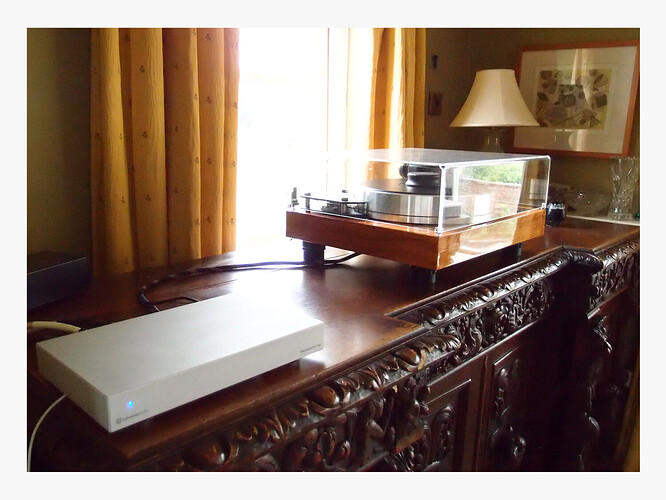 Another constant for a while, the Singing Washing-Machines, AKA, Heco Direkt ‘Dreiklang’ - one of Heco’s greatest fuckups was designing a really bloody good large 3-way speaker, then putting it in a stupidly-proportioned box with a divisive finish and making it twice as expensive as it should have been - and then just bailing-out and giving-up. Oh well… I love 'em, and cannot conceive of changing them until we downsize our home at some point… 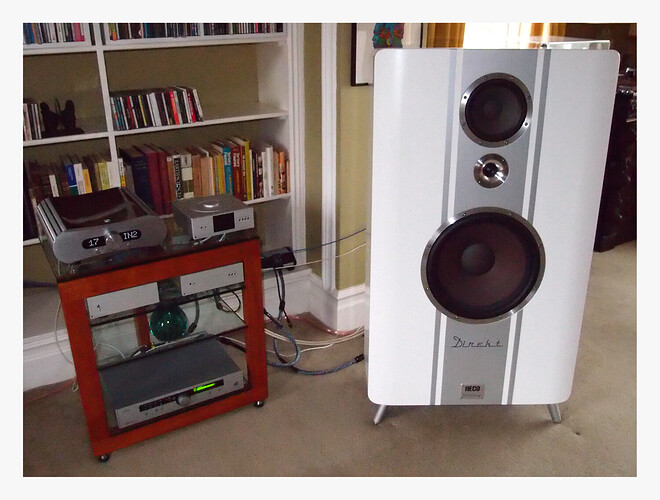 The Gato in particular has replaced ~£15Ks worth of assorted valve kit, sounds nearly as good, and I now no longer quake in fear when I turn the amp on, waiting for a dodgy valve to blow the cones out of my speakers… That alone is a big part of why I’m enjoying music again now. Of course it also helps I can buy what I damn well like instead of having to stick to the brands I used to sell!

So, what are you listening to?

Nice and very pleased to hear that things are back on track enough that you are showing a bit of an interest in hi-fi again.

Serious question are the drivers really irreplaceable?
Downsizing my system due to changing priorities means a 2nd hand pair of these are / were on my radar

The first time I exhibited at Scalford I had a larger room opposite yours with my old Gato DIA 250 driving ARTs and fronted by a Moon streamer and my old full-fat Aro LP12. That Gato is a lovely thing and the DAC is absolutely no slouch. The Gato and my ARTs saw off a multi-box N**M active system with ease. 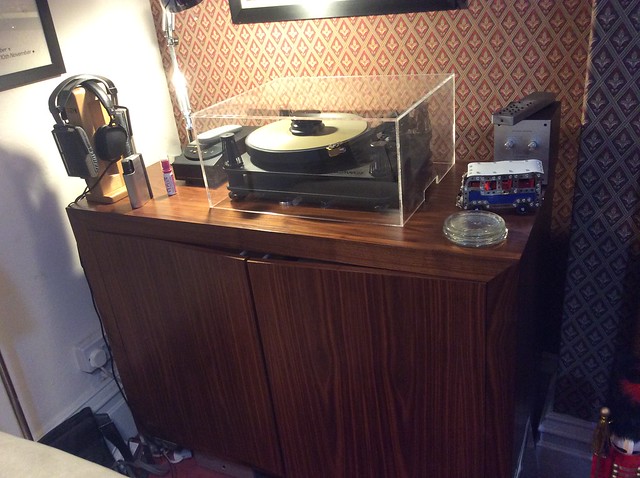 Pre-amp is a Pass Labs XP20, DAC is a fairly foo-ed up Aesthetix Pandora fronted by a Lumin D1 streamer (all in the cupboard). Headphones are fairly bottom of the range Stax which I rarely use. There is also a NAIM CD3.5 and FLATCAP that the kids bought me for Xmas a few years ago from our local Crack Convertors. Here is a shit photo: 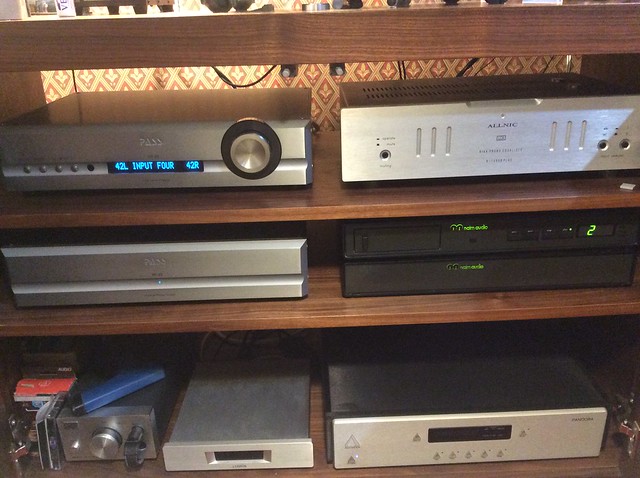 Power amps are Pass Labs XA 100.5 into the same ART Alnico 8s I’ve had since 2013. Again, here is a photo (insert your own subwoofer on custom plinth joke): 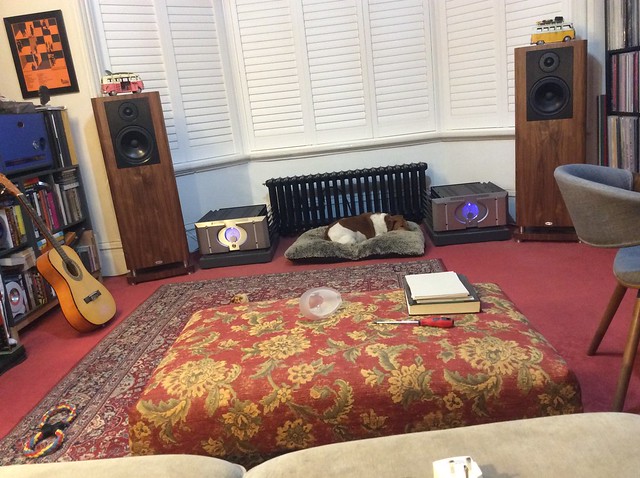 The big blue box on the left hand side of the photograph is my Keith Monks Discovery One RCM which is a lovely thing to use as it is very quiet and great at its job.

I often swap the Pass Labs behemoths out for some Rank concept monoblocks (sometimes because it is hot, sometimes just for shitz and gigglez). 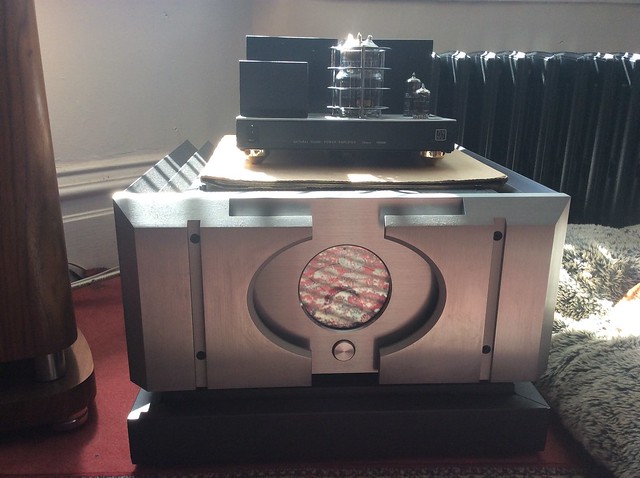 …can barely remember my system

Laptop with an Earmen Sparrow USB DAC and a pair of Audeze LCD-1s. 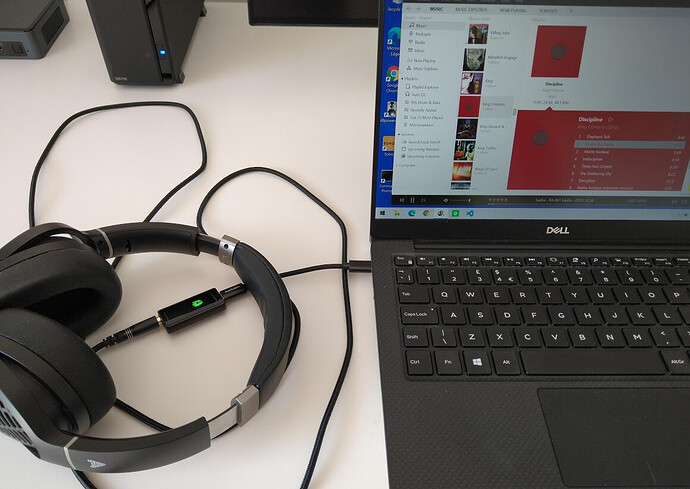 The living room mid-fi is hopefully about to get a sideways / downwards move so I might update on that later. Think I have (as usual) screwed that up on several fronts. 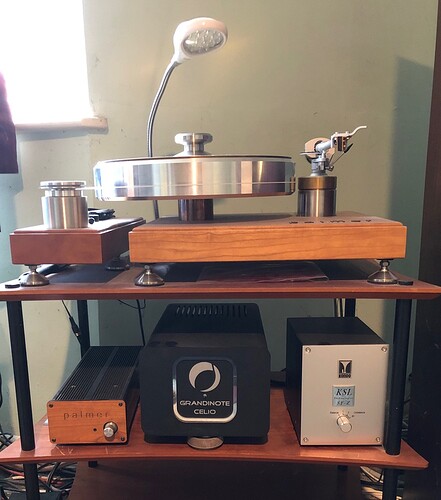 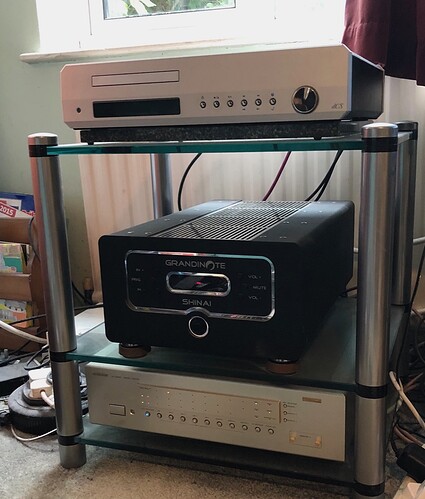 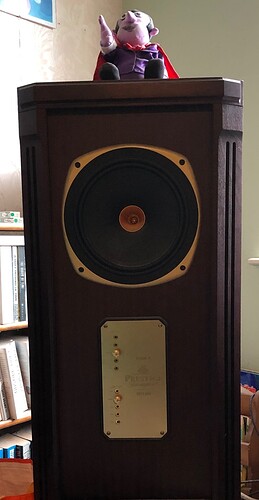 …can barely remember my system

Get building you lazy old git. 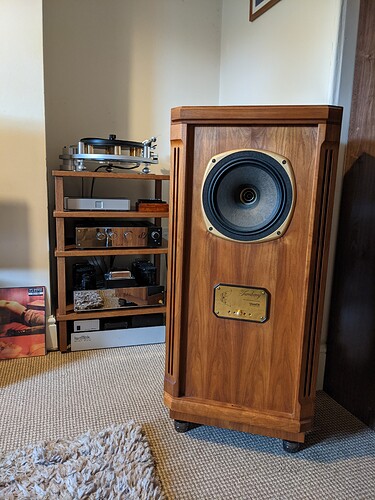 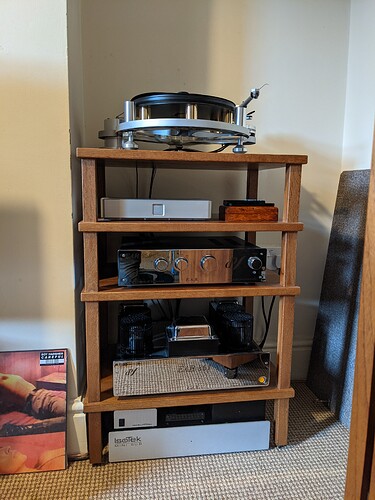 This thread needs details of what cables people are using.

What day of the week is it?

Well, the mainstay of the system has been the same for a while…

I do still have the Sony DVP-S9000ES which I’d love to get back in the system but not enough space as I’m without a dedicated rack at the moment.
I also still have the Ray Samuels F-117 Nighthawk phonostage ready for when I have a fully working turntable, along with an AT-33PTG/II & Ortofon Quintet Blue. 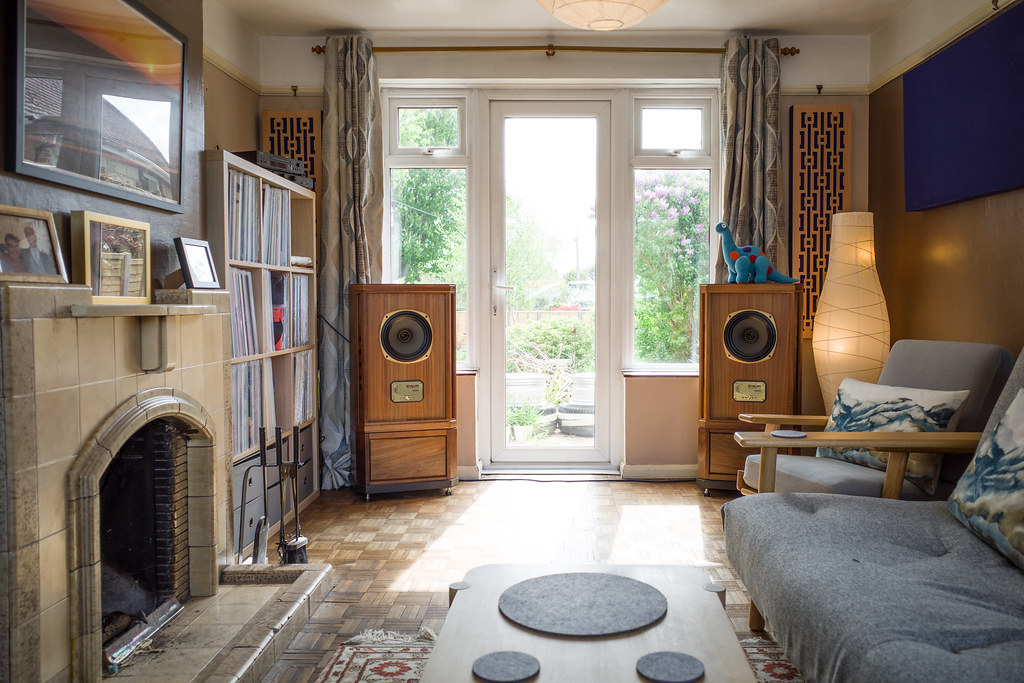 I have a number of plans/projects on the go…

Thorens TD160B - Inherited from Viv’s Dad, as a nostalgia thing, I’d like to get this up and running. I have an SME armboard and Rega too, along with a basic RB250 which requires a bit of modification to fit. Also needs a new plinth but runs well now after a new belt.

Denon DP-3000 - After a bit of fettling, seems to run OK now, got it very cheap as it was not keeping accurate speed. This is the longer term project, along with an SME M2-9 or 309 (when I can find one) to go with it.

Speakers - I’ve been searching for a pair of Goodmans Axiom 301s as I would like to revisit this to go with my Decware Zen. I have a pair of Axiom 10s which I am in the process of trying out but I think that might be a non starter if I can find the 301s.
Alongside that, I still have this niggling want to build another pair of studio inspired speakers, similar to the Kord Tornado I had years ago but likely a Volt 10" and 1" Compression Driver (BMS 4524, Radian 475PB etc). I still have the MiniDSP 2x4HD spare to help with development of this.
I still have the ATC SCM10s, which I have connected back up over the weekend to give them another go in the main system as they were just gathering dust. Same with the REL Stadium II Sub…
Then there are the little Frugelhorn Lite with the Scanspeak 10F drivers in the loft…
Then there is a discrete built in stereo to go in the new Kitchen extension, thinking a pair of Volt CX220.1 Coaxials built into the walls probably with a Yamaha Musiccast amplifier hidden out the way, although I still have a Cambridge Audio A5 amp lying around which could be used with a bluetooth adapter.

Then there is the rest of the kit from Viv’s Dad, a massive Kenwood Amp, Marantz CD67, Pioneer DVD Player and a Sony Tape Deck, all just need checking before moving on as they have been sat in a loft for 15-odd years. Far too much stuff lying around at the moment! 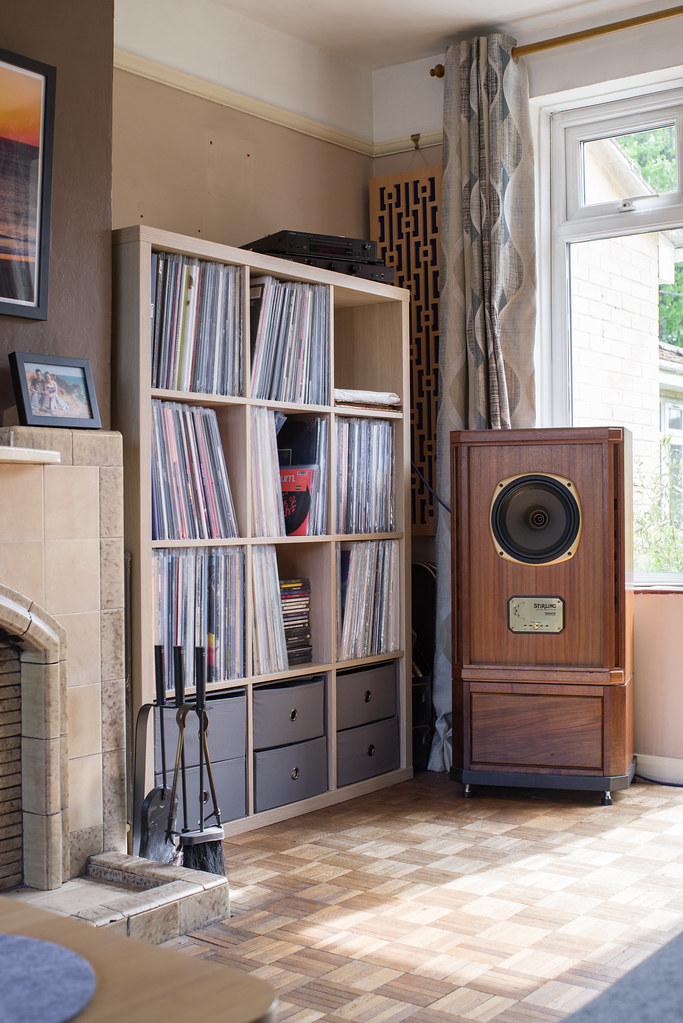 So now the shed is built, its going to get busy!

Bloody hell! Everyone has Tannoy speakers now - didn’t see that coming (well, apart from Mibby who bought his in 1973 when they looked modern and trendy…). 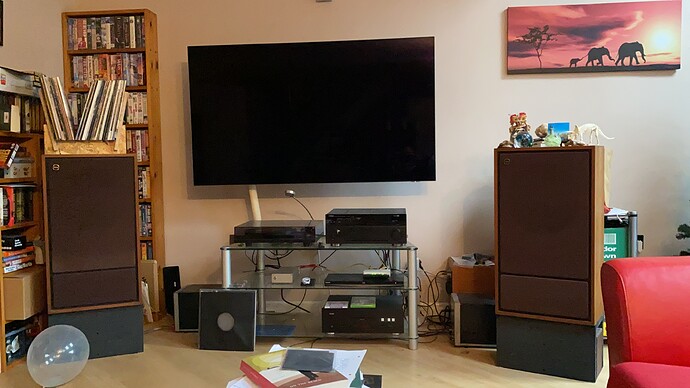 Quite a lots of changes in the past 12 months. Replaced LV Avatar’s with LV OBX RW’s, using a pair of Quad II most of the time although still have the WAD based 300b PP. Pre-amp/phonostage/SUT is all in a lovely Nagra PLP shaped box. Turntable still SME 20/2 with a V. Cartridge is currently Miyajima Shilabe which I got for a bargain on this very forum. 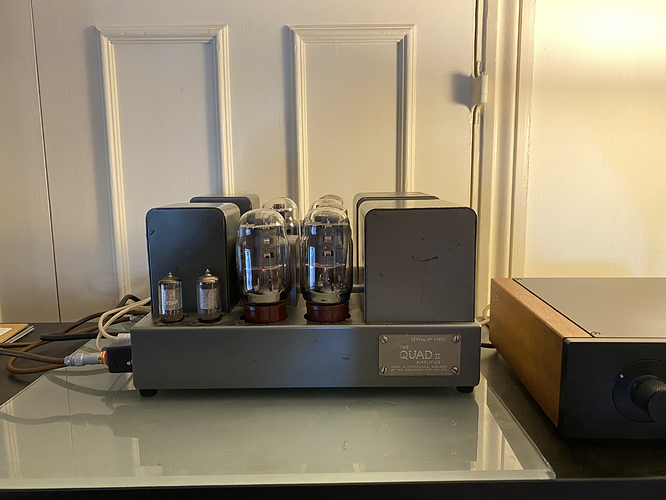 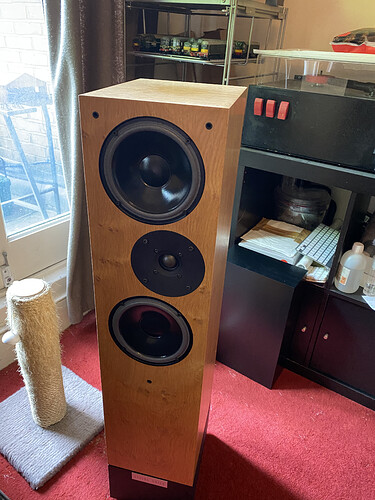 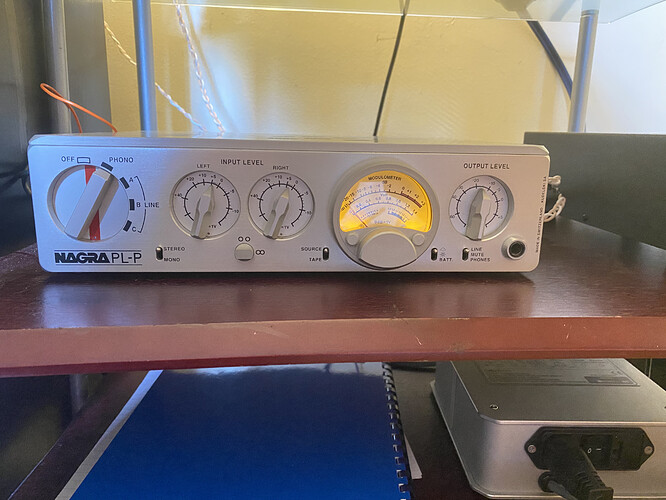 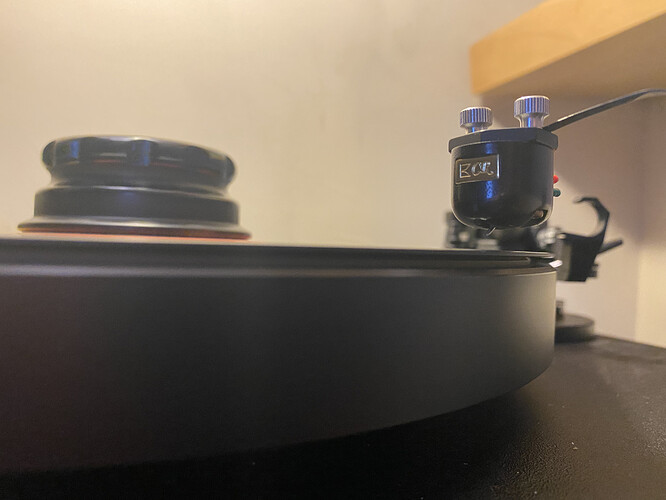 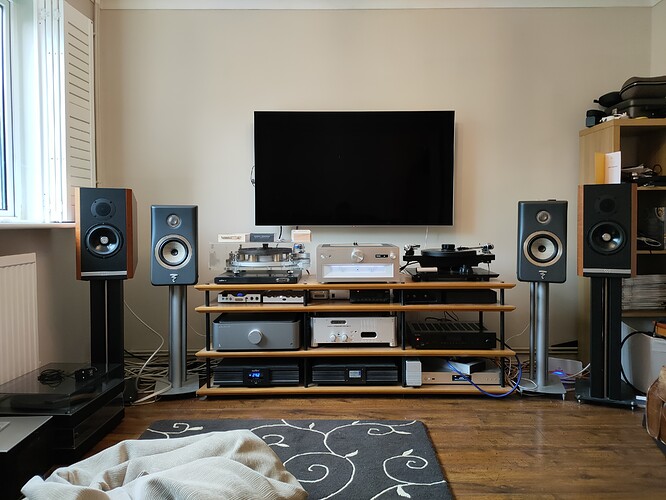 Stuff. There will be some different stuff next week. And the week after. And so on.

The ‘core’ is the Gyro with Vertere arm and cart, Cyrus Phono, Chord Mscaler/TT2 with SOtM, Chord Integrated and the Kudos Titans. I mean, I own very little of it but it has spent a fair bit of time here so far.

At least post it up so we can point and laugh like the cunts we are FFS!

Serious answer I don’t know, my statement was born of my paranoia about fucking valves and a lack of faith in Heco (solely my opinion); Guy can possibly give a better answer. Anyway, it shouldn’t ever be an issue since in normal service they will outlive any of us here. Also, they’re such a bloody bargain now, don’t hesitate - there’s literally nothing anywhere near as good out there at the price.

Those Titans are good; they got a 4* review from What Hi-Fi !