Anyone use stellar pans?

I’m considering buying an 8000 saute pan and complimenting it in a fewhile months with a 1000 pan set.
It’s ticks most boxes and is in budget but I’d like to hear owners experience.

I haven’t tried their stuff, but it ticks my boxes. I have full stainless steel cookware and it’s fantastic (mine is Le Creuset).

The only caveat is the non stick side. I have never found a non stick coating that works, despite sometimes spending a lot; I now use the cheap frying pans and bin them after a year. I see that Stellar do a ten year guarantee, but still I’m sceptical.

BTW the IKEA stainless steel roasting pans are great and dead cheap, to expand on your shiny theme

Try one in your hand. I nearly got one a while back, and I was in JL so I decided to try one in the hand and for some reason the handle felt really uncomfortable to hold.

For non-stick frying pans I buy cheap and throw away when worn. All my other pans are fully stainless with a mixture of brands

I looked at the Le Creuset pans as I already have the cast iron pots, I read a few poor reviews regarding their saute pan and also the cost is prohibitive when compared to some lesser known competition.

We have had a six piece stellar saucepan set for more than 25 years - Still going strong
so recommended.

Does the forged base give a good even heat? No hotspots?

I have a sauté pan that I never use, because I use an enamelled cast iron pan - the really wide shallowish one. Worth investigating the various options? You can get decent branded ones quite cheaply, compared to the Le Creuset.

we have one of these:

WHi9le it gets used as saute i find it a bit lacking, its bloody heavy for a start and id temp changes are needed it takes an age.

If you are talking about the ikea saute pan it is not cast
Just checked it is marketed as a frying pan 28cm with clear lid called senuell.
we use it for all our 4 hour rendangs recipes

The one im considering is this: 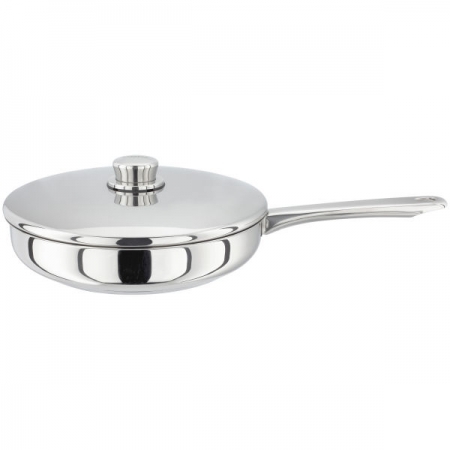 We have quite a bit of Stellar stuff and it’s great, IMHO. Only replaced the first set when we got an induction hob because the early Stellar stuff didn’t play with it, so that’s now reserved for camping trips.

Still looks good after many years and no matter what you do to it, give it a soak then a scrub and it comes up looking like new again.

Haven’t got any experience of their non-stick stuff. The stainless surface probably makes it almost superfluous.

Did you season the stainless?

We have been using Robert Welch pans for 20 years, v nice

Shiny looks good until it has some heat effect and blemishes.

I use Le Creuset plus cheap non-stick stuff.

More interested in how it cooks than how it looks

More interested in how it cooks than how it looks

Get cast iron then

Got cast iron.
It’s ok for some cooking, not for others