So as Admiral (after 6 months, multiple bouts of uselessness and a number of outright lies) have actually sorted out getting my car fixed, I get to have a lovely 16 reg Ford Fiesta for a few days.

The first impression is actually an impression, that of a large lump in the driver’s seat right between my shoulder blades. It is distractingly uncomfortable even for a quick trip, and I can only think that it is there to make you upgrade in the showroom (“ah, if sir wants a trim level other than medieval torture sir will need to consider the Popular Plus model”).

On the subject of dangerous stupidity, congratulations to the designer of the rear view mirror on changing the laws governing optics. They seem to have designed it so you can only ever see the middle third of the car behind you, which means blind spots bigger than a Brexit voter. I thought part of the point of a small hatch was good visibility, this is useless even with the pointless little windows behind the rear seats. Couple that with a wing mirror that can’t adjust enough to give a view parallel to the car and you might as well be driving on instruments only. Instruments that stay lit up whatever the lights are doing, idiotically.

The pedals have so little feel that the flap about in the wind, biting point is always an approximation on the clutch and lifting off the accelerator to change gear always makes the engine overrev, it has that little return spring force.

The engine? No idea which one is in the car other than being a small petrol which is economical by not actually providing any power. A hill which my car can easily get up at 30 in 4th and MrsKettle’s Passatt Bluemotion thing transporter copes with in 3rd causes this to cry at above 20mph in 2nd.

The gearstick is at least in a sensible place rather than being under your left knee (like the late 90s model), but it is hardly a thing of joy.

And the last bit of idiocy comes from the heated front windscreen. Yes, clever, but it is the same module as the Mondeo so the dash doesn’t line up with the door trims to such an extent that it covers some of the stupid quarterlight window they have.

In short, I want my car back.

Brown ones are all right.

To match your coat Graeme?

Had a drive of an Alfa Romeo Quadrofoglia, or whatever it’s called…

Basically it’s supposed to be the new dogs danglies for driving at silly speeds, over German closed road circuits…

Well, after about 2 mins behind the wheel decided it was basically a very poorly sorted car, poor ride, engine was average despite all the Ferrari association, and the interior and seating was a cheapo disaster… The only thing that really stood out, was it had nice steering…

But tbh, everything else would rapidly get on my nerves, and it was waaay overpriced imo…

Well, after about 2 mins behind the wheel decided it was basically a very poorly sorted car, poor ride, engine was average despite all the Ferrari association, and the interior and seating was a cheapo disaster… The only thing that really stood out, was it had nice steering…

Sort of, although the dirt is different

I’m clearly getting too old for ‘character’, lol…

That’s called an Apha Romeo.
You have to be so blindly in love with them that you have no problem with nothing working and having your wallet permanently raped by the worst dealerships known to man who employ plumbers to do the electrics and zoo keepers as mechanics. (Although this is not the dealerships fault, this is the same policy they have in the factory).
I used to know a guy who bought a brand new one every three years knowing that it would spend half it’s life in the garage and depreciate faster than the Ozone layer in the 80s.
When I asked why he adopted this odd sort of stoned look and said ‘because it’s an Alpha’, he looked about as bereft of reason as teenaged boy who has just fingered his first girl.

My Mazda 6 was in for service and a “recall” for a faulty hatch piston. So, instead of sitting in the room watching the blond chick with the really bad makeup hit on every sales manager, while drinking their fairly decent coffee, I took a courtesy car.
It was a Mazda 2 Tech Edition 1.5 petrol like this (same colour too)…

It was a lot smaller than I am used to but a really good drive. Slick gear change and a spirited engine (caveat was that there was a flat spot at 2500, so as you accelerated, it was prudent to choose a lower gear and rev through the retardation.

Interior is comfy if a little confined. Once my seat was in the right position, there was no room for anyone with legs behind me. And I’m not exactly a giant.
The dash was clean with digital readouts either side of the “bold” speedo (left side for revs, right side for fuel and mpg)… 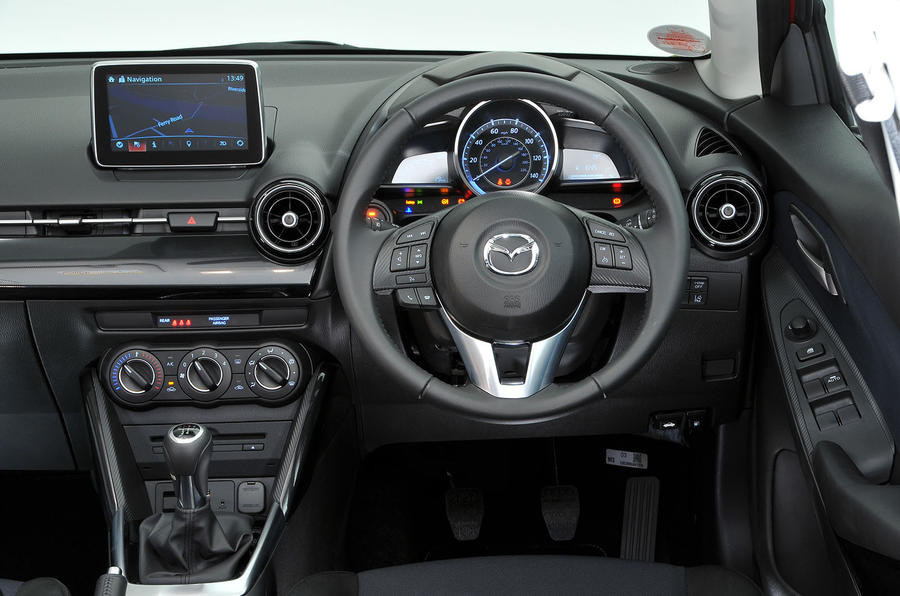 As a car for the family, it’s a dead loss but if you don’t intend too many long runs (and by that I mean 2+ hours of solid driving), it’s a comfortable runabout. Narelle is considering one to replace her aging Hyundai.

Once my seat was in the right position,

Crikey well done, how on earth did you manage to get the seat to move back? On some models it’s really difficult.

I had a Mazda 2 RED edition with a 90hp 1.5 petrol engine for a few days while my POS 6 was off the road last month.
I thought the gutless (and noisy when pushed) engine was a crock of shit made worse with an unsuitable long, 5 speed gear box. It did 68mph in 2nd and took an eternity to get there. wtf is that about in a city car?
Decent interior though.
Our 17yr old micra has a far stonger drive chain and makes better progress in real world driving.

That is about mpg numbers on a piece of paper and fuck real world driving. zoom zoom my flaccid cock.

Not technically a courtesy car, but my recent trip to London was to bring back a Lexus RX Hybrid.

Overall, it was a fairly pleasant experience, but by God if it were my money I wouldn’t buy one, not even close.

The internal controls are something of a nightmare; we changed the car from miles to KM in two separate places and the main speedo and more importantly the cruise control were still in miles and I never worked out how to change that, which was frankly fucking annoying.

I think it also ended up stuck in Sport mode the entire way, but I’m not honestly sure. The ride was still pretty pleasant if sport mode does fuck about with the suspension.

I really like the auto-adjusting cruise control, that worked pretty damn well to be fair to them. Generally got lane identification right even if on a reasonable corner etc.

The boot is really fucking high and it felt like there wasn’t a huge amount of space there given the size of the vehicle. I’m guessing the hybrid system is taking up a phenomenal amount of space. Not sure what it was doing there either, as the 3.5l engine drank petrol like it was going out of fashion, and whilst moderately quick when you belted it, it wasn’t all that quick.

Turning circle was pretty decent, to be fair, and the seats were very comfy which on a 12 hour journey is not to be sniffed at.

Motorways or Autoroutes are not the natural playground for hybrids. Petrol at speed, electric bit when pootling about.

I’m guessing the hybrid system is taking up a phenomenal amount of space. Not sure what it was doing there either, as the 3.5l engine drank petrol like it was going out of fashion, and whilst moderately quick when you belted it, it wasn’t all that quick.

Heard that about the Outlander PHEV too. Nice looking SUV and on paper it seems like a great idea - in reality they’re a nightmare. Frankly the published mpg figures are not fit for purpose and bear zero relation to real world conditions. They really need to come up with a new standard for hybrids because the current system is being gamed to fuck to come up with 150mpg bullshit. They struggled to achieve 25mpg.

Our friends sold their Outlander for a massive loss after 12 months.

I think I only managed 25mpg over thetrip, and that was with Eco mode enabled

So, what pollutes more, a petrol hybrid doing 25mpg or a diesel doing 60mpg?

Depends on what sort of pollution is your favourite, I suppose.

Currently got a petrol Seat Leon FR for a few days. Quite a nice car I must say. Good gearbox, engine is willing to rev but doesn’t need the nuts wragging it off to make reasonable progress and the cabin is well damped so it doesn’t sound thrashy. Not sure but I presume it’s the base 1.4TSi

The interior is nice, and the 8" touchscreen is easy to use with a decent amount of regular buttons for the important stuff.