I’m going to document my next build, which will be a digital active system that is as cheap as I can manage.

Here is the system at present: there is a Squeezebox Classic, which feeds a class D chi-fi amp and then Heybrook Sextets. 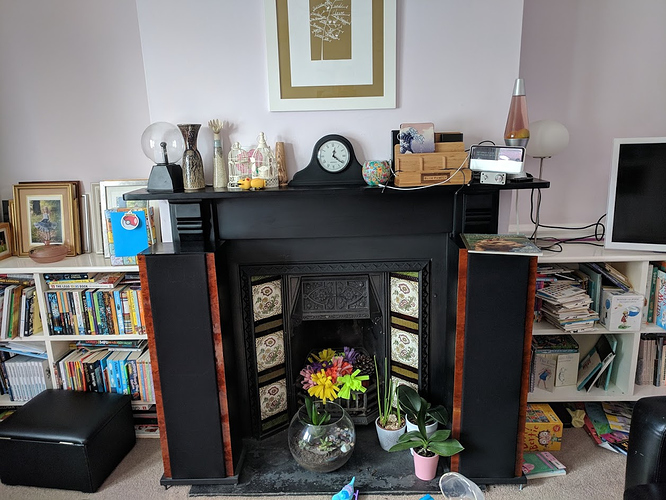 Things are a bit untidy, so I’m going to build a system that will fit to the left of the TV, on the white shelf. There is a space about 26cm deep and 36cm wide, with no real height restriction.

The system I have planned is as follows:

The NUC should be capable of FIR filters, running a convolver in Reaper or JRiver. The sound card is capable of 24/192 (although the NUC probably won’t be able to process at that rate, we’ll see) and sounds pretty good. The amps are low power (about 6W really), but I generally like the sound of TA2020s, and this system will never go loud. It’s my Sunday morning system.

Progress will be slow, not least because the amps will take a month to arrive.

I have some 12mm ply that I’ll use to house it.

What did you pay for the Sextets Adam?

There’s an issue with one of them not being quite balanced. The drive units all make noise, but one is quieter at some frequencies. I could measure and try to work it out, but instead I’ll just bypass the XO and see if that fixes it. It’s probably an old cap. I hope!

Good price. A fair bit of speaker for that money

OK I have all of the parts except for the one I need to get started! I decided to buy the plywood cut to size, and found this place: http://www.woodsheets.com/ Seems ideal - it cost £23 for seven small bits of ply cut to size. Their cutting will be way more accurate and clean than anything I could do. Unfortunately they still haven’t got round to doing it yet.

So instead, ten minutes on rePhase and building a linear phase crossover. I’ll talk much more later about getting an accurate crossover. To start, I just want something that works. 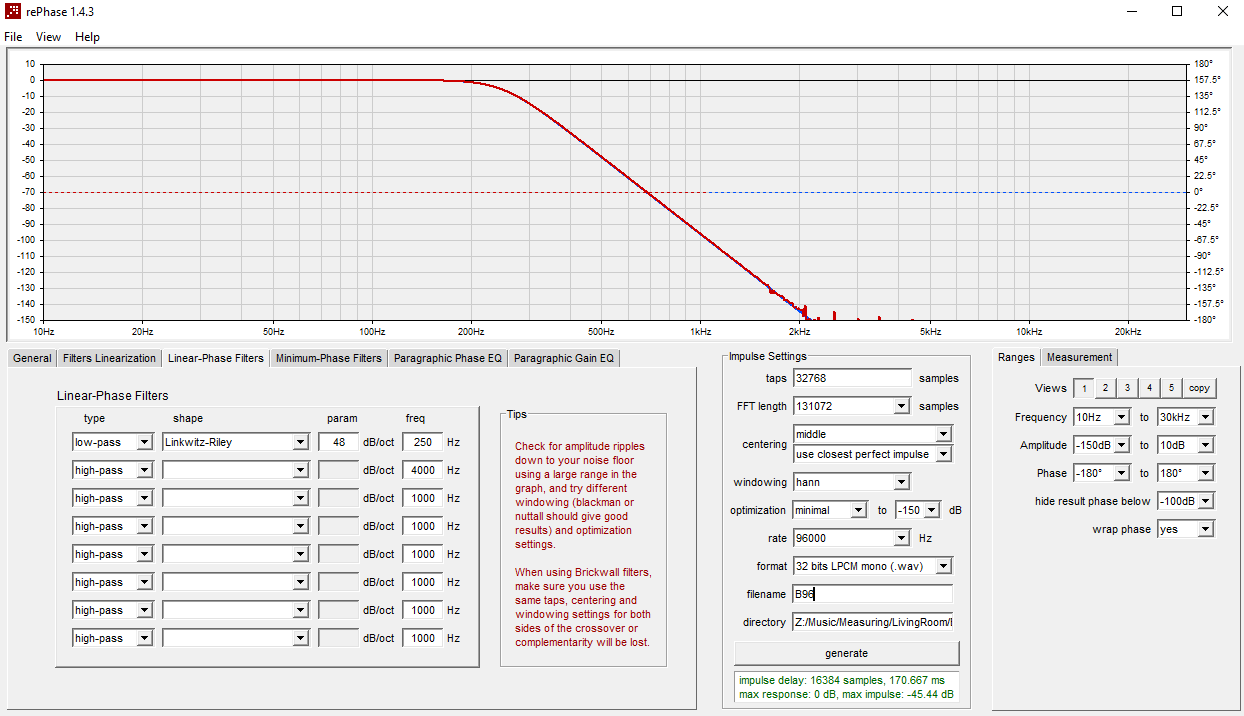 I need to create three files, which I’ll call B441.wav, M441.wav and T441.wav. These are the bass, mid and treble files at 44.1kHz. I’m also doing 96kHz for hi-res stuff. A linear phase crossover uses a convolver which effectively multiplies the music signal by another file that contains the crossover shape, producing a band-limited version of the music.

The options chosen in rePhase are very simple:

You can see in rePhase how accurate the output will be - the target is a blue line, and the output is the red line that almost completely obscures it. The errors are at -130dB and below, so way below noise level, let alone audibility.

Once I have the rePhase files I need to create the config files to tell JRiver how it works. These look like this: 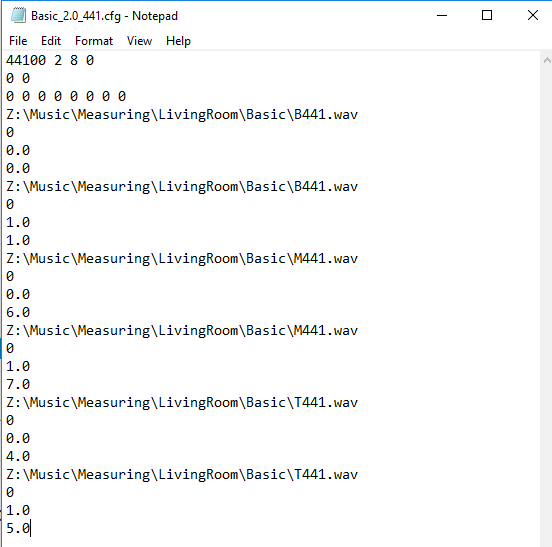 There is also a 96kHz version, which is exactly the same but 441 is replace with 96 (including in the name)

The important parts here are as follows:

And that’s it. Next I need to set up the computer (which needs everything installed) and configure JRiver.

The wood will be arriving tomorrow, although being school holidays I doubt I’ll be able to make much progress on anything.

Decided to get the computer up and running. Installed JRiver and it can run the convolver at 10x real time, so that’s all good, and that was while importing the music library and various update/security things running. Sweet.

A rare burst of energy after the holidays, and I’ve done some drilling and stuff. 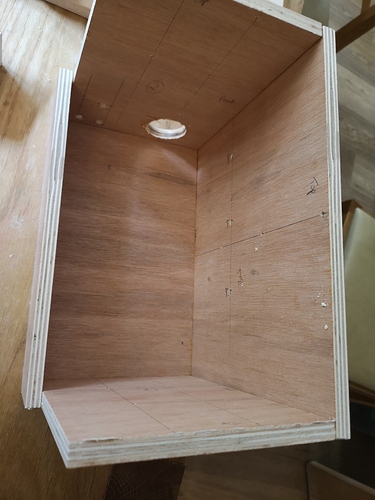 That’s the box overall, there are two shelves to go inside it. The bottom shelf has the mains inlet (which will switch only the amps) and a fan inlet; this section is the only one that is closed at the back because mains voltage. It will house the power supplies.

The next shelf has the three amplifiers, next up the DAC and an external HD, and the PC will sit on top (mainly so I can access its power switch).

Looking on the software side, I had an interesting and annoying issue - playing music remotely. I have no idea why this is a problem nowadays, but it is. I want to be able to play my own music, and Qobuz (or any other streaming service I fancy). Qobuz does not have a connect facility like Spotify Connect, which simply allows you to play on a remote device while browsing, selecting and generally controlling from your phone or tablet. Neither does Tidal IIRC.

I considered using a Chromecast Audio, and routing the digital output from this through JRiver as crossover. It would work but be rather clunky. Actually it would be fucking barking to use such a system in 2019 (or 2024, when I might actually have finished this thing). All of the streaming services seem intent on adding devices, not improving the system in their Windows programs.

As is often the case, the best solution is achieved via Logitech Media Server, the old Squeezebox system. I have installed Squeezelite-X from the Microsoft Store (it’s free), and this is a player that works with ASIO, so can play bit-perfect to JRiver. There is full Qobuz integration (and Spotify, Deezer, Tidal…), so it Just Works, and can be controlled from any phone or tablet. I’ve set it up on my main PC to try it out, and it’s working flawlessly, with the sample rate changing as expected so I know it’s bit perfect. Sweet.

Pretty much what I use other than reaper instead of jrivier.

Reaper won’t rate change, so I use squeezelite to trample everything with six to 88.2khz.

I had Reaper running a while back but moved to JRiver when they brought out their WDM system. With newer versions it also changes sample rate very well.

Do you have any views on digital processing at higher sample rates? Is it worth doing?

Do you have any views on digital processing at higher sample rates? Is it worth doing?

LOL, how many years did you own dCS for?

I’m talking about doing the whole crossover at a higher sample rate. The dCS upsampler and DAC was nice, though, such an elegant sound.

I like the idea of all the filters and room correction being done at higher rates.

My main issue is the lynx/apogee setup I have. The clock is in the dac and the lynx syncs to it, so sample rate is set by the dac not the software.

My main issue is the lynx/apogee setup I have. The clock is in the dac and the lynx syncs to it, so sample rate is set by the dac not the software.

I think that there is an 8-channel DIY (ie no case) version for about £500. Audio Science Review guy creamed himself about the performance.

Nice, but see no reason to change. The clock being in the DAC was a conscious choice.

The clock being in the DAC was a conscious choice.

It was before the asynchronous usb chips were more common, like the xmos etc.

I run an analogue source (tt) and with other setups the input clock and output clock would lose sync and cause grief. Not an issue these days really.

But really, it works, was fairly high end so made well and I cant be bothered to change.