For a bit of fun can you spot the difference in the two valves pictured? Not for fun could someone please explain how this is possible? 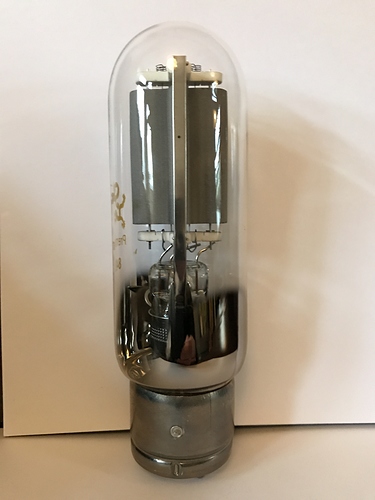 They are but that is not the biggest difference

Also true but again not the big one

The top looks different - no gold bars on the top one.

True, again not the really big difference though

You mean the internals are shifter 90 degrees wrt the base?

This is why I would buy the gear you build. Well spotted. Does it really make no difference?

Other than aesthetically, no.

It could create some issues if the tubes were used on their side, as some, e.g. 300B, require a specific alignment in that case, to minimise the risk of hot things sagging and causing shorts.

Pretty sure 211/845 are not suitable for sideways mounting anyway.

Aren’t some suitable for horizntal use only provided the anode is in set the vertical plane so it doesn’t cook itself?

Aren’t some suitable for horizntal use only provided the anode is in set the vertical plane so it doesn’t cook itself?

As per post above, 300Bs are, probably others like 2A3, but that’s to avoid the grid sagging and shorting afaik. Not sure why it’d affect anode cooling?

I didn’t think 211s were, at least I’ve never seen it, I’m sure it’s not an issue for Paul’s purposes.

Thanks, looks weird when all the sockets are facing the same direction but the valves internal structure is at 90 degrees rotation to the other

I thought I’d read it somewhere about EL34 . I guess for the same reasons as heatsinks being more efficient when the fins are in the vertical plane so there was a specific orientation in which to mount them (EL34s) if used horizontally.

I’d have guessed even more significant with flattish monoplate types?

Not much cooling air flow in a vacuum tube.

No but it’d be interesting to measure the effect of the orientation on how efficiently the radiated heat gets taken away from the envelope in the two positions.

Possibly, I doubt it’s a major effect, though. I think most heat is lost radiating through the envelope to the surroundings.

I thought I’d read it somewhere about EL34 …

It’s in the original data sheet for the KT88 - under Installation on p5 here http://www.r-type.org/pdfs/kt88.pdf. When the valves are vertical I believe it limits the radiant heating of one anode by another. When they’re horizontal it stops the grid sagging onto the cathode (bang!), as Pete says.

Welcome to the wacky world of 845s - finnicky, unreliable, short-lived and fragile - and fabulous-sounding.

I have had an allegedly matched pair bought from the same vendor, with the same batch code where the visible internals were different in almost every detail, including orientation. Beggars belief, but I guess production runs end, and mods are incorporated in the next run… Certainly sounded identical in-circuit.