This site has finally reviewed an album I actually like…

Random Access Memories is the fourth and final album by Daft Punk, released in May 2013. This album received the Grammy Award for Best Album of the Year in 2014. It contains the famous track Get Lu…

I’ve not looked into the site but do they ever compare an all analog recording vs it’s digital counterpart?

Is much recorded in analogue nowadays?

You can’t really compare the DR like that. Done like this vinyl almost always shows more DR when often it simply isn’t there.

Some vinyl is as clipped as the digital, Metallica Death magnetic: 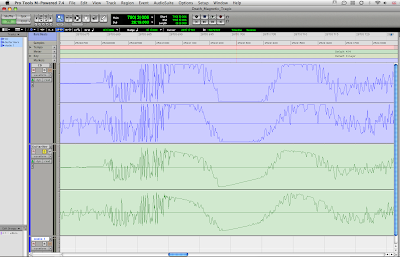 It will still show a much higher DR.

Some vinyl is as clipped as the digital, Metallica Death magnetic:

Apparently they used ‘Pro tools’ on that recording. Hence the clipping on Digi and vinyl.

Its just clipped, if the master or the original track was clipped, that’s what you are going to get. No reason Pro Tools would clip anything, its just lousy work.

My point was most of the time the vinyl comes from the same source, so its the same lousy rubbish, it may sound better because of vinyl’s inherent faults, but digital lps are the devils work.

Is much recorded in analogue nowadays?

More and more analog studio’s are opening up but I fear a lot of the black arts are lost and the equipment perhaps not in spec with the golden era.

My point was most of the time the vinyl comes from the same source, so its the same lousy rubbish, it may sound better because of vinyl’s inherent faults, but digital lps are the devils work.

I think we are driving at the same point. The benefits of vinyl as a medium are handicapped by digital recording.

When I got back into records, my plan was just to buy pre 83 stuff, sort of worked… But I do have quite a bit from post 83,so actually, it didn’t work.

Not sure. 24/192 (or higher these days) done right without any clipping would be fine, but what’s the bloody point, just listen to the digital file.

I don’t buy any remasters/rereleases unless it explicitly says “all analogue” like say Analogue Productions.

New stuff I buy the LPs as they are nice to fondle.

I think that I’ve heard enough digital sound absolutely fantastic that I’m convinced it’s the mastering process that makes the most difference, not the basic format.

Well it’s probably better than all but the very best 2” tape looked after by the best engineers.

Mostly I would say the digital re issues of originally recorded analog recordings sound worse. Compressed, sterile, or somehow lacking ‘Verve’. The exceptions would be recordings originally put out on styrene, flimsy oil crisis vinyl, recycled vinyl or poor pressings.

The Abbey Road so called audiophile releases are an example half speed mastered but digitally processed. Playing a mint solid air next to the Abbey Rd the ‘audiophile’ pressing sounded like it’s chi had been sucked out of it.

But I don’t disagree, most remasters/rereleases are dreck.

But I don’t disagree, most remasters/rereleases are dreck.

Some analogue recording remasters/remixes are done digitally but are better than original recordings. This isn’t a popular belief but modern processes, done well can have a beneficial effect.
I refer to Steven Wilson remixes as an example.

Analogue recordings, if recorded/mastered poorly, will still be poor.

I have flimsy early 80s records that sound fantastic. I don’t buy into this 180g malarkey, if its not produced, mixed or cut well, putting it onto heavier vinyl won’t sort anything.

All it’s good for is to help avoid dishing.

Makes no odds to the sound.

I’ve compared 180g and normal copies of The Works by Queen. No difference to the sound as far as we could tell. Both sounded great