What to do with a NUC?

So I find myself with a surplus (i3, 8GB memory, small solid state disk) NUC. 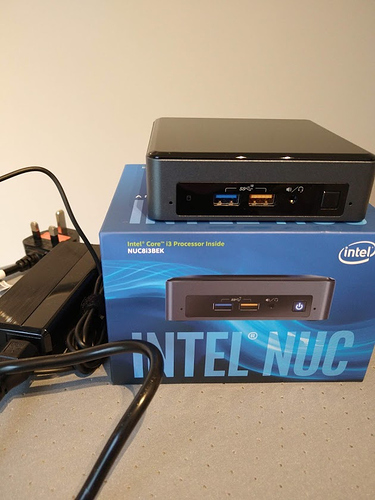 I has Roon ROCK installed on it but me and Roon don’t get on.

What’s slightly annoying is that simply plugging an Audioquest Dragonfly Cobalt into the back of it, it sounded very good IMO. It was just that half the time I couldn’t find my music in Roon.

I can probably buy a Windows license, install that on the NUC and maybe use it as a headless server in my living room, effectively a Windows streamer.

So, does anyone do this? Any suggestions for software? With a decent remote app (that doesn’t force my tablet into landscape unlike every other app in the world

What about something like Kodi for under your telly? Works on Linux.

I might be interested in buying if you want to move it on. I know you’re not keen on posting stuff, mind.

Do you have a home server of any kind?

I use a NUC running Windows as a Plex server for movies and photos plus network file sharing; I use a R Pi 4 for Squeezebox and networking stuff like Pi-hole. I really wouldn’t be without these.

I read the web page, but still don’t know what it is…

Uhh, all the music is on a NAS.

I watch a lot of catch up TV, and (very) occasionally stream a movie from Amazon or Google.

Logitech media server and iPeng as they remote? Though I think it’s Apple only

I have reached a point where I pay a lot of money for various film and TV streaming services, but I still use bittorrent because I can’t find what I want to watch at any given time. An example is a lovely film on Van Gogh that I watched about 10 minutes of on Netflix, then decided that I wanted to include the wife as she’d love it. By the time we sat down together with time to watch, it had disappeared from Netflix.

The NUC would be great for this - you can do it from you phone via various remote access systems.

I so long for video streaming to be like music streaming, where you have access to virtually everything and the artists get paid based on what you watch/listen to.

Though I think it’s Apple only

Squeezer on Android is great

Squeezer on Android is great

I am using Orange Squeeze, and have done for years. Works great.

i did that for a short period, but it was a faff - replaced with a proper streamer

Did that but the NAS is better at all. We rarely watch a film…

Actually now that you mention it, i think i have a i5 NUC sitting behind the TV doing nothing…

Did that but the NAS is better at all. We rarely watch a film…

My Pi is better as a music streamer (and as a DLNA streamer), but Plex worked much better with windows - and it’s a great server really. But that is mainly for films

Decided to buy a Windows license, attempt to install it, then use something like MusicBee, JRiver, Audirvana.

Doubtless this will fail horribly and I’ll have to go begging to the wife to fix it.

I have literally no idea what I’m doing.

Looks like you have way too much time on your hands!