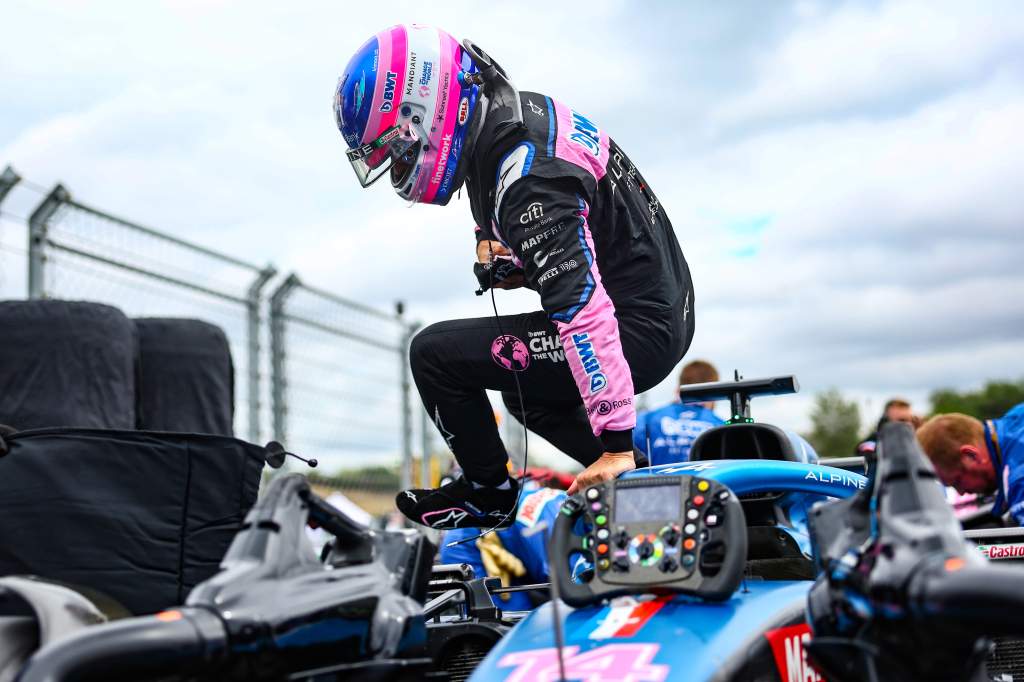 “Things that make you go HMMMMMMM…”

Motivated, on-form Fred has been a joy to behold.

Let’s hope Aston a) has some major finance incoming, and b) won’t try and crowbar Alonso into playing #2 to Lance de Boyle…

Leaving aside tbat AM are haemorrhaging cash, extra money isn’t enough - the personnel, structure and leadership matter so much, and they seem rather lacking on all fronts, esp the latter

I don’t blame him if Alpine were only offering 1 year, but I suspect he’ll be looking at Ocon’s rear wing an awful lot

They’ve properly fucked this one up, if true 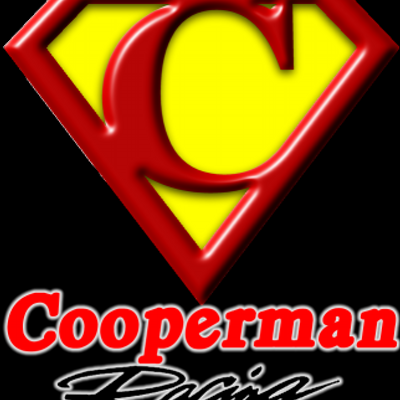 @adamcooperF1
Otmar Szafnauer insists that @AlpineF1Team has first call on @OscarPiastri for 2023, and thus the youngster can't go to @McLarenF1 or anywhere else. And he's trying to get hold of PIA's manager @AussieGrit in order to clarify matters...: autosport.com/f1/news/alpine…

WTAF? Ricciardo to Alpine then…?

Someone should give Jamie Chadwick a trial.

You could stun a herd of Ox with the tonnage of good shit on the Internet today, but here’s just a few of the best 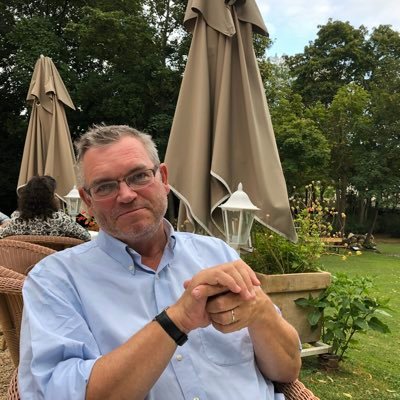 @joesaward
Maybe (just maybe) Alpine's option on Piastri ran out at midnight on Sunday (as did Alonso's). At which point Alpine thought Alonso was staying on... Nine hours later, Alonso announced his deal with Aston Martin. So, perhaps Alpine now needs another driver for 2023. 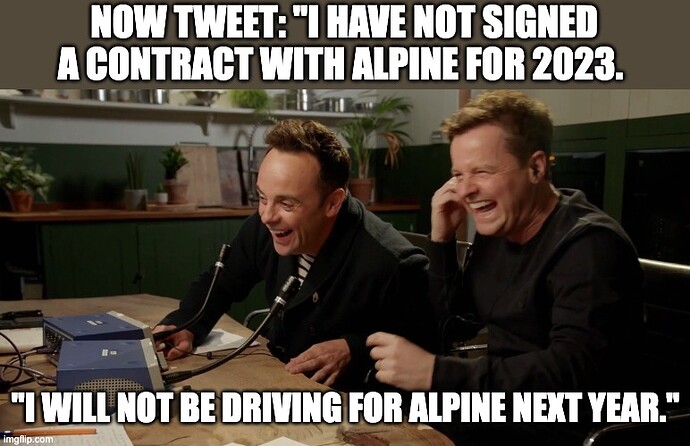 @SMitchellF1
Fernando Alonso on Instagram at the same time Oscar Piastri tweeted rejecting the Alpine announcement and denying he’d race for the team next season. https://t.co/VMrdTLuOem

Don’t fuck about with Fred.

You’d REALLY think teams would have learned by now 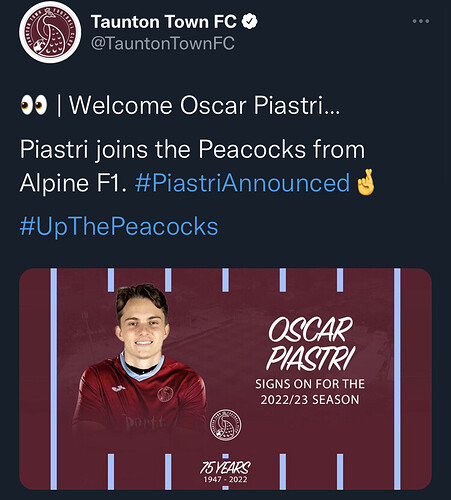 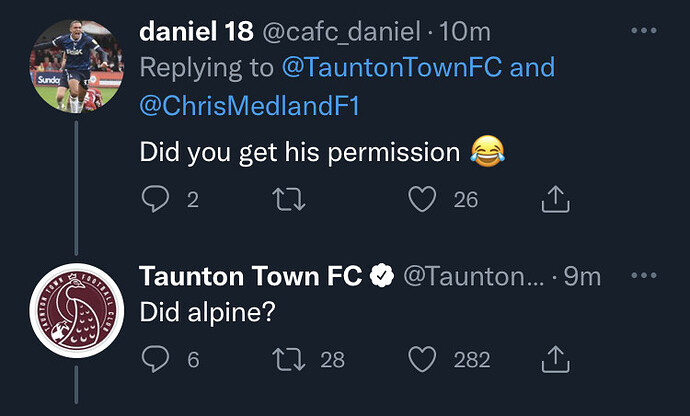 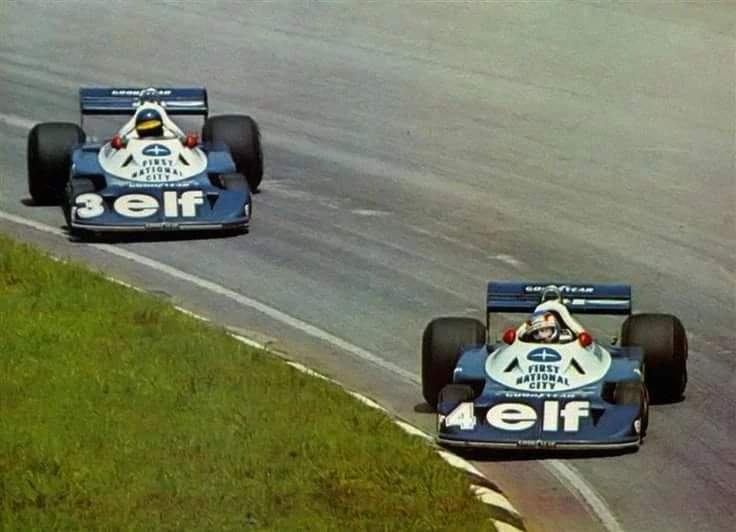 Saw them at Brands in '76. To a 13YO kid they were THE best thing Ever (even if not tremendously competitive) - although the entire crowd nearly rioting after Hunty was DQ’d on a technicality was pretty mad too! Then he came back out!

Love F1, but it doesn’t get better than that for me. 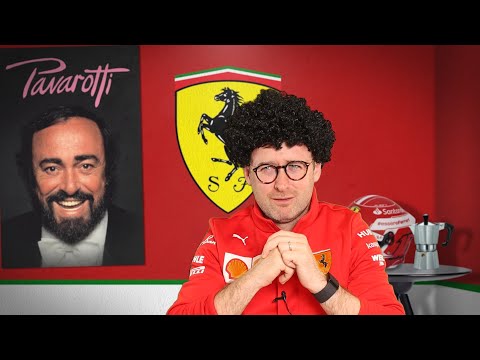 Had the six wheeler on my scalextric kit I got for Christmas one year. Was up against a black John Player traditional four wheeled car. Kids toy but both had tobacco branding all over them, No wonder I ended up smoking f0r 20 years…

Fair point but Marlboro most definitely should have not have had models in hotpants circulating the Unis giving out multiple pack of Marlboro Gold for months on end. I used to smoke less than 10 a day till i had 80 plus a week for free every Thursday in the union.

The issues surrounding the last race of last season are still bubbling away. Y’know, like when the old cast of a TV programme turn up years later?

Michael Masi has told the Australian ‘Daily Telegraph’ that he’s signed a non-disclosure agreement with the FIA which prevents him from discussing the decision to only allow some drivers to unlap themselves.
Have to ask - why would that be needed?

Had the six wheeler on my scalextric kit I got for Christmas one year. Was up against a black John Player traditional four wheeled car

Ha, the March six wheeler, I had that set! The JPS was about twice the speed in mine, made it rather absurd as a race tbh