Albums you should love but hate and other petty music hates As a teenager music was never that important to me, computer games and horror novels were of far more interest. Certain music started to appeal and the money changed from computer tapes to music tapes, all played though a freebie personal tape player my Dad got free with a bigger purchase from Boots.

Soon enough my tastes went across the pond and songs about dudes looking like ladies and dudes that actually looked like ladies being obsessed with Girls Girls Girls started and a need to grow my hair and walk around with a half empty Jack Daniels bottle. At some point in this time a friend gave me a tape he had made up of tracks from what he referred to as a “proper” metal band. The tape wasn’t a copy of a particular album but a collection of songs and the best thing? I wasn’t going to hear these guys on the radio, they were so good they didn’t need radio play or to make tacky music videos.

I got my sister to buy me their latest album (on tape of course) for my Xmas present off her. I fell in love with the music. I loved the way the songs built up, no need for 3 minute songs, long periods where guitars battled for supremacy against each and in fact it was so good who cared if the singer didn’t really sing.

And then they released a video.

But it was ok, it was for a long song that would still never get airplay or be repeatedly pushed on that MTV thingy, and let’s admit it , the song is as near to a perfect ballad as a “proper” metal band could do.

A few years later they headline what was to become one, if not the last, Monsters of Rock albeit at the time I was rather more interested in their main support band at the time, Therapy? than the band themselves. Halfway through the set they announced a new song, One of the lads I was with looked at me and asked what was the problem. I really didn’t like it. Now anyone who ever tried to get out of a Monsters of Rock on the same day knows you spend about 4 hours trying to get out of the car park. We argued about that track for pretty much the whole time.

I never did buy the album, new tacky music videos being constantly played on MTV and the Radio 1 approved airplay put me off. I didn’t like it, there was no anger there, no need to preach, the tracks didn’t build up and there was way too much melody and, this really ticks me off, you could hear every word sung. This wasn’t “proper” metal.

I’m trying to listen to the album now as I write this. Music with this much melody, this well produced, shouldn’t make you this angry should it? But the worst thing? My U2 loving work colleagues who mocked me for listening to noise actually wanting to talk to me about this great new band they just bought an album by. I think that hurt more than anything else. Now I have to go and find some missing basslines from that previous album.

I still hate the album, old age and a more forgiving nature hasn’t eased the hate. Petty? Of course, in fact the only way to make it more annoying would be to play it with an orchestra.

Do you hate it so much you are selling your copy?

Don’t have a copy, never bought it. Streaming it to see if I feel any better about it. I don’t.

I never did buy the album,

Mistake posting it, still not got my head around this forum at times.

can you summarise please?

I have to nip out. I’ll read the rest tomorrow. And the day after.

I was bored and angry, the words just flowed. The stephen King of posts.

This from my Kodak Instamatic in, err, 84? 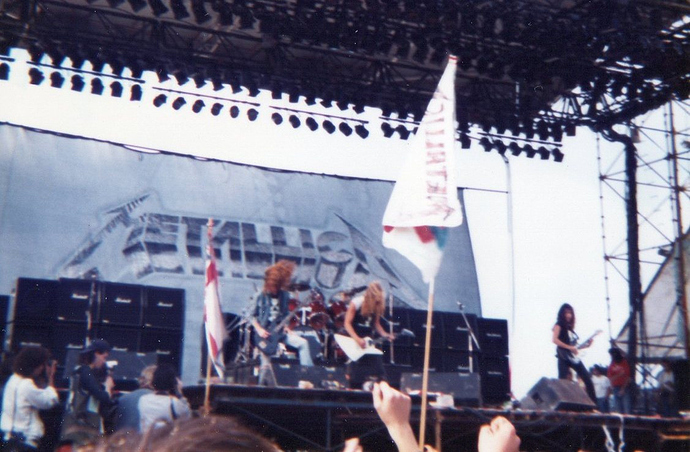 At the time they were an incredibly vital outfit. By the time the black album came out they were heading for stadium-filling plodding anthems (IMO).

I saw a video of theirs on Kerrang TV last night - Jesus wept, what thudding self-indulgent drivel.

Wished I had been to that one, rather than the one I did go to,

I read it. It’s nice to see something other than puns, beer cans, and vile watches.

You’re on the wrong forum Steve

I don’t think '84. I went in '84 and it was from memory, Y&T, Gary Moore, Ozzy, Van Halen and ACDC. Maybe Megadeth somewhere down the bill too…

just looked it up, Dave Lee Roth era Van Halen as well. Crikey a fair few egos and legends all in one place.

Of their entire discography, I still only like Enter Sandman. The rest is just filler.

Certainly the best track on the album

Good thread, we all have these I think.

There is loads of stuff I never got and never bought.

Some I have revisited due to all the acclaim on forums like these.
Some I have changed my mind about, quite a few I haven’t.

Bands I don’t get and have tried to understand more than once but don’t own any albums by, include

I will probably add to this list as I think of them!

You’re on the wrong forum Steve

The tricky is pretending to be a prick without actually being one.

The Wikipedia article isn’t totally accurate at least for Donington since it reckons Magnum opened and it was definitely Diamond Head.