Looks like the recent Brexit thread has reached it’s limit - over 10000 posts. 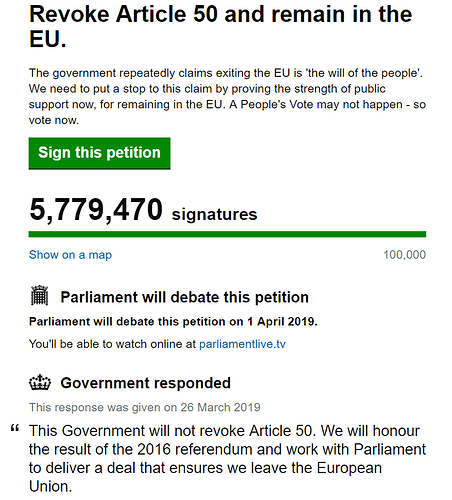 So we have a Parliament who are ignoring the near 6 million signatures on a petition, ignoring the (claimed) million people who went to London, and ignoring the million (or so) people who have come of voting age since the non-binding referendum result where the majority of people voted based on lies, deception and (at best) misleading claims. (From both sides.) We’ll gloss over any illegalities that took place in preparation for the referendum.

Apparently they are going to “deliver an exit which benefits everyone, whether they voted to Leave or to Remain.” Really? That’s going to be a neat trick. Assuming there’s any companies left in the UK to be satisfied with that result.

If there was some sort of deal around leaving the EU, that would be fine. There (still) isn’t, despite years to prepare one. Instead we have a Prime Minister who insists on re-presenting the same discussion for a vote in the hope that a few more people can be persuaded to come over to her side. (The same woman who was quite outspoken in opposing Brexit…)

Stay, or leave? Everyone has an opinion. Many have very valid arguments (regardless of their position), and most people are now aware of what the issues might be (either way).

If we’re going to stick by the original vote, then that decision was taken in 1969, leading to the UK joining the EU in 1973.

That’ll be why @coco started a new one then, six days ago?

Brexit episode 2 - the attack of the gammon General Chat