I find myself once again mulling over the idea of building myself a set of speakers. This would be part woodworking project (all @BobC’s fault), and part hifi upgrade. Whilst I’ve done a moderate amount of woodwork in the past, hifi components have always been somewhat black boxes for me. Both @Mrs_Maureen_OPinion and @edd9000 have very kindly offered to help with things like crossover design and building, but I have still not decided what sort of direction to go in.

We’ve a moderately large room, so something to fill that is the first priority. Other than that, my tastes run to a whole mix of things, from Triangle and Wilson Benesch to the Dreiklangs and Zingalis.

I’d like to keep them relatively sensitive so that pure Class A amps are a viable option.

Unlike most threads asking, I genuinely have no idea which avenue I will go down at this point.

My one concern with horns is their depth front to back, as unless they can basically be backing onto the wall they are probably going to be too deep.

Whilst budget is somewhat flexible, I probably cannot drop £6k on exotic YL compression drivers either

My one concern with horns is their depth front to back, as unless they can basically be backing onto the wall they are probably going to be too deep.

Whilst budget is somewhat flexible, I probably cannot drop £6k on exotic YL compression drivers either

Haha, that’s what I was going to suggest!

No arguments, they sounded fucking fantastic, and if I had the money it would be a serious consideration. 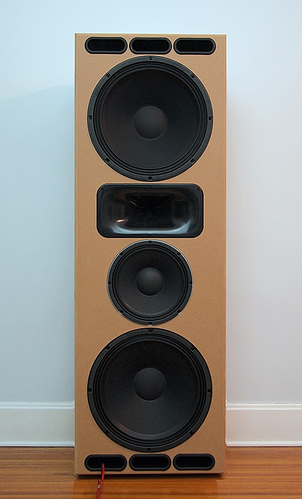 A good alternative to horns if you’re tight for space is quarter wave cabinets. Plenty of information all over the Internet.

I’m not crazy short of space, but Coco’s horns were pretty deep units and I suspect want a fair degree of distance off the back wall.

I suspect want a fair degree of distance off the back wall.

Matters less with horns as they are directional, crossover can be adapted to suit, though with horns I would go DSP/active anyway, multi way horns and passive crossovers are far to much like hard work.

I built passive crossovers years and none of them stood up to even a basic active one.

The big advantage of building your own is obvious. With careful thought it will look and perform close to what you’re after.

clearly the Vitavox constructor series is the place to start

I guess you’ve read Troels Gravesen’s advice http://www.troelsgravesen.dk/choices.htm. Even if you don’t like any of his speakers there’s a good deal of important basic truth in there.

Big problem here is actually hearing something before you drop a metric-fucktonne of cash.

Jon - you sure this is the way to go? DIY is usually marginally more expensive than buying summat you like from the used market, and unless made by someone like Coco has exactly fuck-all residual value.

Given you live in the land of cheap used Triangles, I’d want to be sure I was making the right decision if I was you… Not meaning to piss on any parades, but…

Have you checked the new Lab-Yah Audio offerings? The Block board Schumann options punch well above their weight.

Whenever I have these sort of fantasies I go round to see Simon Mears and look at his work, that soon reminds me that I have no talent for this sort of thing.